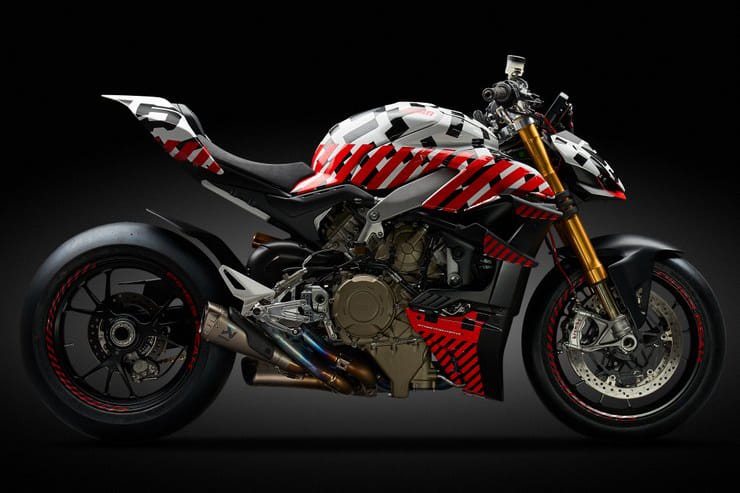 Ducati’s Streetfighter has been missing from the firm’s range since 2015 but after a five year hiatus the name is coming back with a bang in 2020 when it will adorn this Panigale V4-based naked superbike.

Look past the over-complicated distraction paintwork of this prototype and you’ll see a close approximation of the showroom-ready model. It’s just lacking the final lights, licence plate bracket, mirrors and indicators – as well as the inevitable all-red paint scheme, of course.

Why has Ducati revealed the bike today? It’s because practice sessions for the 2019 International Pikes Peak Hill Climb are set to start tomorrow, and this is the bike that multiple event winner Carlin Dunne will be racing for Ducati at the event. He’s previously won on a Ducati Multistrada, but it’s the perfect competition for the new Streetfighter thanks to unique regulations that demand single-piece handlebars in an effort to prevent out-and-out superbikes from taking part. 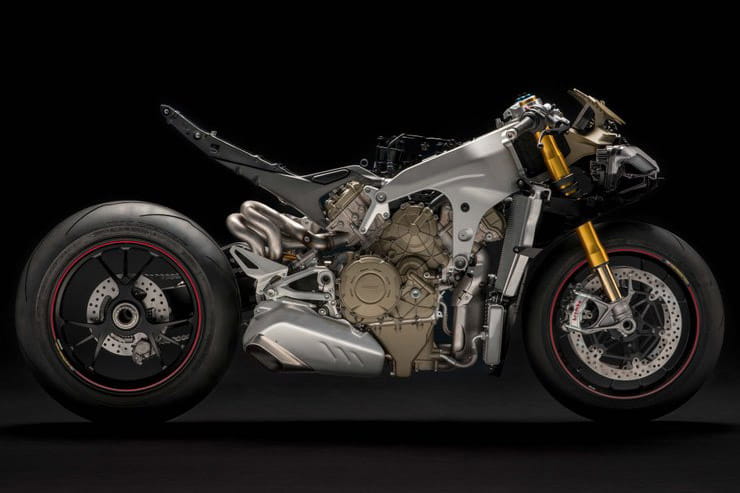 So, what can we see in Ducati’s official images of its prototype Streetfighter V4? Well, the clearest message is that this bike is very closely based on the Panigale V4 (pictured above). Ducati has confirmed that the bike “derives directly from the sports Panigale V4 stripped of its fairings and fitted with high and wide handlebars” and that description pretty much sums the bike up.

The chassis is clearly that of the Panigale, and the engine is the same 1103cc V4. Whether it’s using identical tuning remains to be seen, but given the number of high-powered naked superbikes emerging onto the market at the moment, Ducati is unlikely to have unnecessarily reduced the performance. In the Panigale the motor makes 214hp at 13,000rpm, and Ducati will need to keep it at that level if it’s to take the ‘most powerful naked bike’ crown from MV Agusta’s new Brutale 1000, which already claims 212bhp.

We can clearly see the Panigale’s half-length frame, with the engine as a major chassis component, and the bike also uses the Panigale’s single-sided swingarm and has identical suspension, wheels and brakes to the Panigale V4 S. That means Ohlins NIX30 43mm forks and a TTX36 rear shock, both with electronic adjustment, plus Brembo Stylema calipers on 330mm front discs.

On this prototype racer, the exhaust is a track-only Akrapovic, but there’s little reason to believe the production bike won’t use the same system that the Panigale V4 features. Other Panigale parts to be carried over include an identical seat unit, the same fuel tank and airbox and even the same front mudguard. 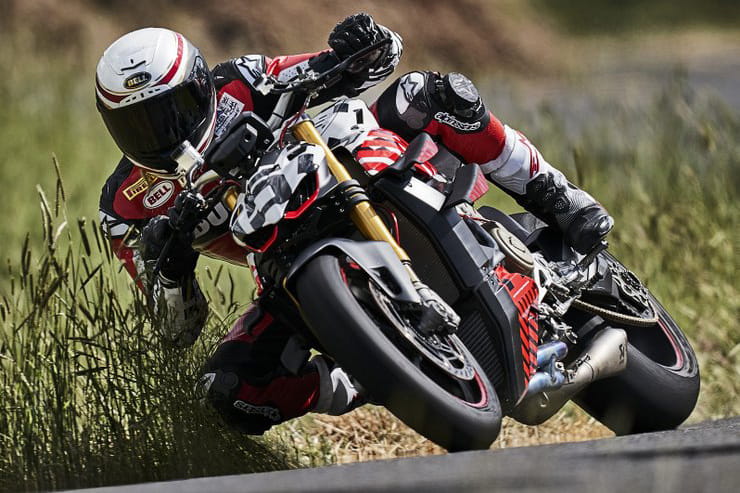 That means the notable changes are really based around the nose and the sides – the bits needed to replace the fairing that Ducati has stripped away.

Since this is a race bike we can’t see the headlight, but all indications are that the style will be much like the Panigale V4, with headlights embedded into the air intakes in the nose. Despite being ostensibly a ‘naked’ bike, there are actually some pretty extensive side panels on the Streetfighter, completely encasing the sides of the radiators and melding into a foreshortened belly pan. The most interesting aspect of the sides is the addition of aggressive, MotoGP-style winglets. It can’t claim to be the first naked bike to use the idea – MV Agusta’s latest Brutale got there first – but these wings are far more extreme.

We’ll have to wait until November and the EICMA show in Milan to see the final, road-going version of the bike, and it’s due to be in dealerships in March 2020. Ducati’s boss, Claudio Domenicali, said: “The Streetfighter V4 will be one of the stars of the Ducati World Premiere 2020. Streetfighter V4 is the Panigale for road riding; so there was no better stage than the Broadmoor Pikes Peak International Hill Climb for what will be the highest performance Streetfighter ever put into production.”