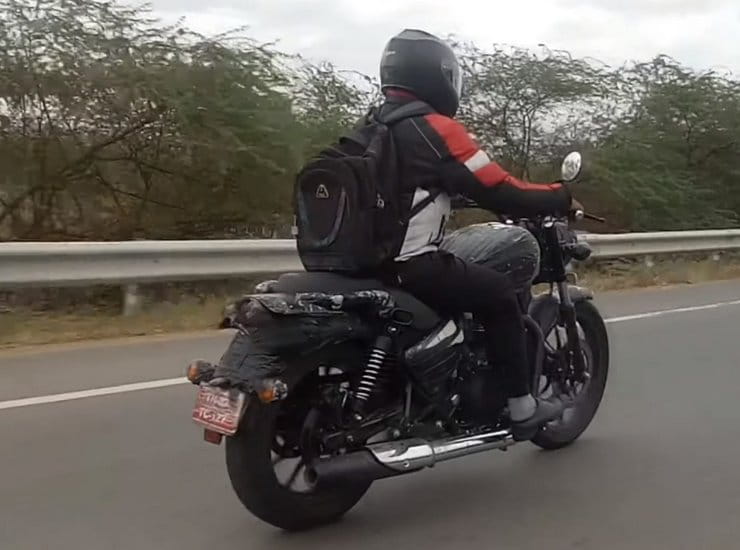 Royal Enfield’s mainstay models – the retro-styled single-cylinder machines – are all set for a massive overhaul in 2020 as the firm addresses new emissions rules.

Not only does Royal Enfield face the problem of complying with new Euro 5 limits by 2021, but the Indian market – by far the firm’s largest – is also adopting tough new Bharat Stage VI regulations in April next year. To comply, the firm is currently completing a project to completely revamp its most important mass-market models, the Classic, Thunderbird and Bullet, which all use Enfield’s 350cc and 500cc single-cylinder motors and share similar frames.

The bike you see here appears to be the Thunderbird version, or perhaps the Thunderbird X given its use of alloy wheels rather than wires. But it shows the new chassis and engine that will be used across all Royal Enfield’s classically-styled singles.

The engine is expected to retain its existing 350cc and 500cc size options, and the top end remains familiar-looking, but the bottom end and transmission are clearly significantly changed. Most notable is the fact that the drive chain has swapped sides, going from the right to the left. That could be for technical reasons but may also be an effort to meet ride-by noise limits; by putting the chain on the opposite side to the exhaust, the sounds they both make are separated and potentially reduced from the perspective of a noise meter as the bike goes past.

The exhaust also gains a large new catalytic converter, although it’s cleverly hidden. It uses a similar idea to the one Triumph pioneered with the latest Bonneville models, which use dummy exhaust sections to give the appearance of a direct connection between the headers and the tail pipes, hiding the fact that the real exhausts actually snake away to hidden catalysers. On the Royal Enfield, there’s a chrome heat shield that fools the eye into believing the pipe runs straight from the cylinder to the silencer, but in reality the gases are diverted into a large catalytic converter hidden below the front of the swingarm. Once cleaned, the exhaust is routed back into the silencer.

The frame is also new, with noticeable changes to the engine mounts to accommodate the reworked motor, along with a redesigned swingarm pivot area. Other changes extend to the front brake, which switches sides to be on the right, while the chassis geometry appears to be different around the rear end and the seat subframe. The few body elements on the bike are also new – notably the triangular side panels under the seat, which are larger than before.

The 2020 Royal Enfield Classic, Thunderbird and Bullet models sporting these changes are all expected to be unveiled towards the end of this year.