Kawasaki working on a hybrid bike 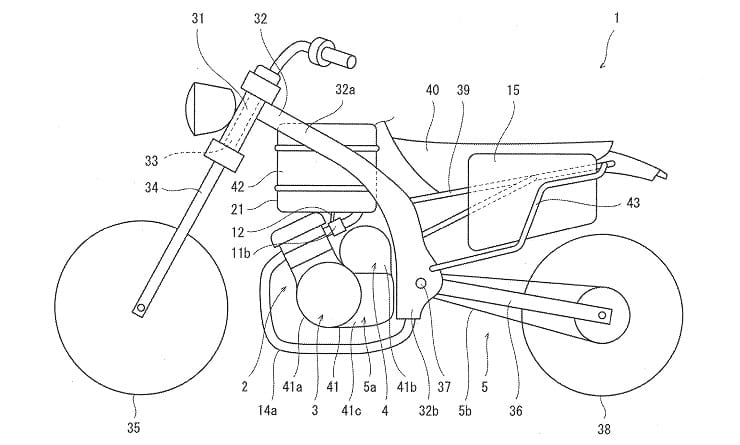 Hybrid cars have come a long way since the first tree-huggers took the keys to their Toyota Priuses (Prii?) 22 years ago. These days the idea of combining a petrol engine with an electric motor for better economy and emission is so widespread that virtually every car maker on the planet has a wide range of them on offer.

But when it comes to bikes the idea just hasn’t taken off. Yes, Piaggio launched some hybrid Vespas and MP3s a decade or so ago and Yamaha has shown several hybrid concept bikes, but while the idea of electric bikes appears to be getting traction now there’s still little appetite to mix both forms of power.

However, Kawasaki has just filed a new patent application for a hybrid motorcycle, suggesting that the idea isn’t completely dead.

The new patent application, dated today (4th July), shows the construction of a bike that combines a simple single-cylinder engine with a large electric motor. In the picture above, the motor is the circular unit mounted above the transmission, labelled ‘4’. The bike’s battery box (42) is mounted where the fuel tank would normally be, while the tank itself is repositioned under the seat (43).

The reshuffling of parts is one reason that hybrid bikes haven’t taken off in the past. When we spoke to motorcycle engineering specialists Ricardo about the idea earlier this year (here) they pointed out that packaging two powertrains into something as small as a motorcycle is an unappealing prospect.

It’s clear that the Kawasaki patent application is still a long way from anything that might represent a production bike, but it shows that the idea of hybrid motorcycles lives on in the bowels of some of the biggest motorcycle R&D departments in the world.