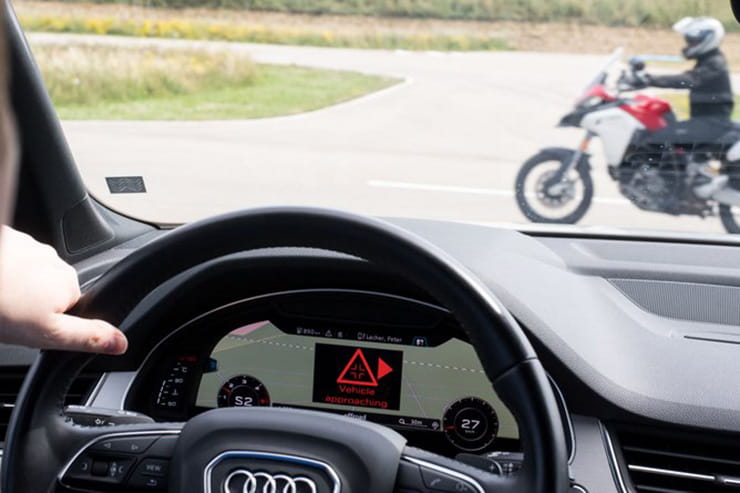 Ducati is forging a position as the most high-tech of all bike firms and its close links with parent company Audi mean it’s also perfectly positioned to be a pioneer in car-to-bike communication.

We’re not talking about drivers talking to riders, but cars actually communicating with bikes directly, without human involvement, so each vehicle knows precisely where the other is and what it is doing. The idea, of course, is to prevent accidents before drivers or riders are even aware that there’s a potential danger.

In fact, it’s not just cars and bikes talking to each other. The system’s name – “ConVex” – is a corrupted contraction of “Connected Vehicle to Everything”(C-V2X). The dream is that cars, bikes, pedestrians and even road signs will eventually be wirelessly connected so that each knows about the other even the fallible human element fails to take note.

The system was demonstrated using Ford and Audi cars as well as a specially-equipped Ducati Multistrada 1260 at the Consumer Electronics Show in Las Vegas this week, having had a preview demo in Europe last summer. For the American test, the vehicles were made to cross a four-way intersection without line-of-sight visibility.

On-board computer chipsets from Qualcomm on each vehicle wirelessly connected to each other, allowing the computers to negotiate and agree a pattern for the vehicles to enter the intersection and pass through it safely.

These weren’t robotized, self-driving vehicles, though. Although the system can be tied in to automatic braking and accident avoidance technology, its main intention is to give drivers an advanced warning of hazards before they’re even in sight. 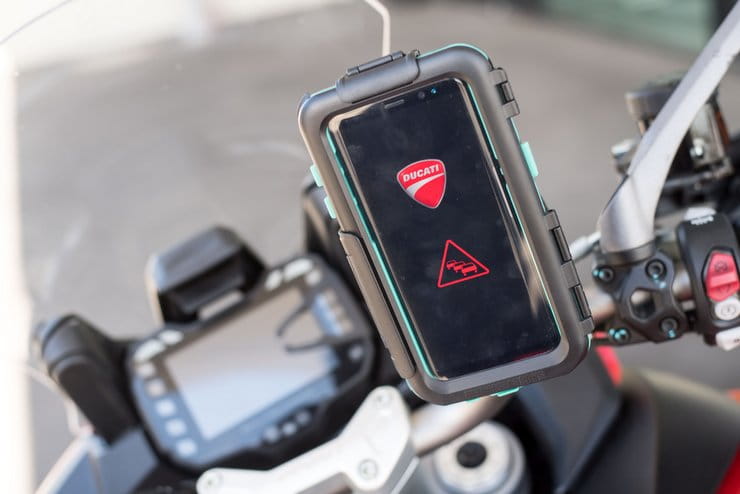 For Ducati, the technology is part of the firm’s ‘Ducati 2025’ safety initiative, which has already seen the firm adopt cornering ABS across its entire range in 2019 and will see the introduction of a bike with front and rear radars next year.

Pierluigi Zampieri, Vehicle Innovation Manager at Ducati, said: “This demonstration is showing use cases in which advanced technologies can significantly improve the safety of motorcycle users. C-V2X communication is one of the key projects of the Ducati 2025 safety road map. There’s no better place than CES to talk about our roadmap towards the future”.

Anupam Malhotra, Director, Connected Vehicles & Data at Audi of America, added: “Audi has demonstrated a novel C-V2X use case together with Ford, Ducati and Qualcomm Technologies. The four-way stop use case provides a glimpse of how cooperative driving will be possible with C-V2X in the future. Besides additional safety, C-V2X is designed to also improve comfort and efficiency, which can be applied to both current and future autonomous driving. Audi has demonstrated commercial viability of cellular-based V2X services through the Audi Traffic Light Information service and plays a leading role within the 5GAA to develop this technology further.”

Ford Connected Vehicle Platform and Product executive director Don Butler explained more potential for the system: “Imagine a person suddenly steps into the street from out of view and your vehicle stops because it was alerted by that person’s smartphone. This is just one example of how C-V2X can connect smart vehicles to a smart world. We invite other automakers, governments and tech companies to join the significant momentum building for a C-V2X ecosystem”.

Ford plans to have C-V2X on some of its production cars in America by 2022, and Ducati and Audi are likely to have similar timescales. As a standardised system, C-V2X is also backed by a cross-manufacturer group, the 5G Automotive Association, which includes BMW, Honda, Daimler, Hyundai Land Rover, Nissan, Renault, Volkswagen and Volvo as well as dozens of other automotive and technology companies to help ensure the widest possible compatibility. Perhaps most importantly, Bosch – which supplies ABS and other safety tech to the vast majority of bike firms – is also on-board. Looking at how fast its ABS and traction control systems have spread across production bikes over the last few years, C-V2X could be widespread sooner than you might expect.