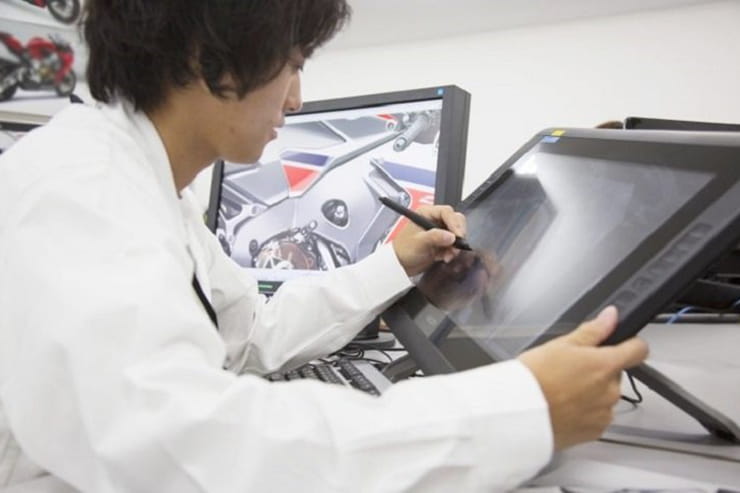 Honda’s corporate announcement that it’s to close its Swindon car factory might have dominated national headlines this week but the company’s changes are wider-reaching than that. On the two-wheeled front, the firm has revealed that it’s going to consolidate its entire motorcycle R&D operation into a single organisation alongside its Motorcycle Operations business.

Until now, motorcycles have been developed by a division of Honda R&D Co., Ltd., a separate subsidiary company. From April, the motorcycle R&D division will be absorbed into the main business; Honda Motor Co., Ltd.

At the moment, it’s not clear what effect, if any, the move will have on Honda’s motorcycle R&D departments in Europe and America.

In 2010, we started an initiative to strengthen collaboration among different divisions in the areas of sales, production, development and purchasing.

And since 2014, production, development and purchasing divisions have been sharing one workplace at Kumamoto Factory and developing products in collaboration.

In the meantime, if we look around our market environment, competition versus manufacturers from China and India, in addition to competition against Japanese, European and U.S. competitors, is further intensifying. Moreover, we must continue complying with environmental regulations which are getting more stringent in every country. We also have to undertake more initiatives to expand into new markets for the future. There is no question that our business environment is changing more dramatically than ever.

To this end, in order to advance our existing product development system and enable more coordination and collaboration among sales, production, development and purchasing divisions beyond their boundaries, we will consolidate our Motorcycle Operations and Motorcycle R&D Center into one organization.

Under this new organizational structure, we will fully integrate the entire process involving new models – from the planning and conceptual phase through development, initial production and mass-production – and secure our global competitiveness by increasing not only product appeal, but also cost competitiveness, quality and the speed of development. 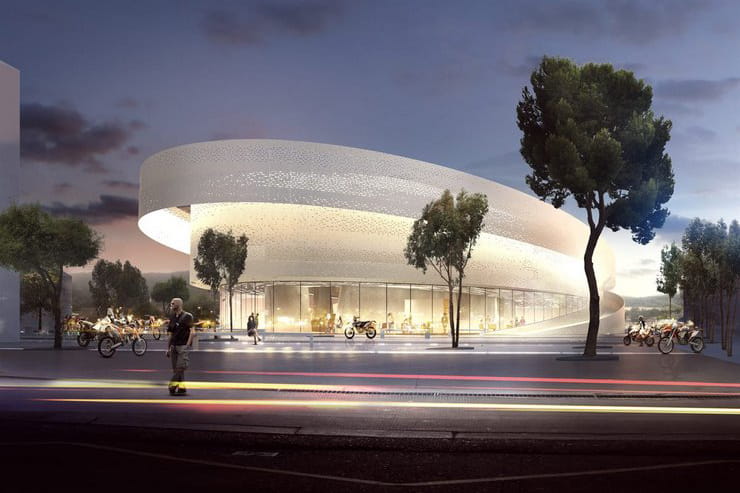 2: KTM Motohall to open in spring

Manufacturer-owned motorcycle museums are becoming an essential part of the effort to build and maintain a loyal customer base and KTM is the next firm to be opening one.

Ducati laid out the template for factory-based museums, and last year Triumph joined in with its own facility in Hinckley. KTM’s Motohall, in its hometown of Mattighofen in Austria, will be added to the list when it opens to the public on the weekend of May 11/12.

The Motohall has been an ongoing project for the last four years. Built in the centre of Mattighofen, close to the KTM factory, it’s claimed to be more than just a motorcycle museum, although its focus is an exhibit of more than 100 KTMs from the firm’s history.

The building will also house a restaurant and bar, an ‘Innovation Lab’, an events venue that can hold 400 people, three stories of underground parking plus a dedicated motorcycle parking area and – inevitably – a shop.

For riders looking for a new destination in Europe, it seems as good an excuse as any to make the trip to Austria. See full details here. 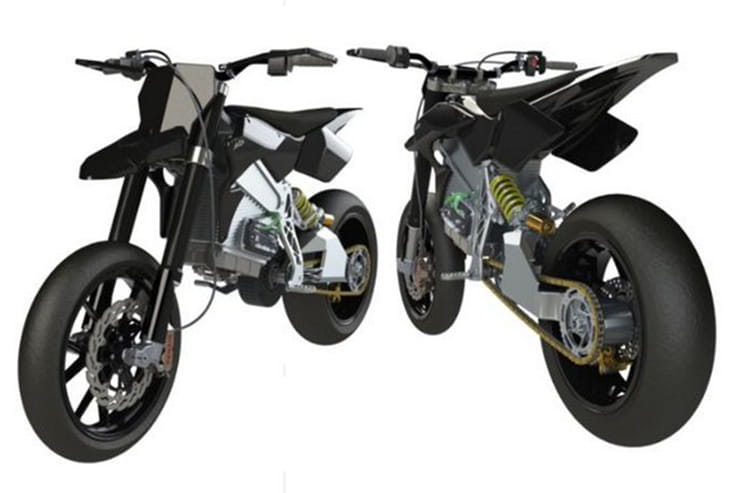 There’s clearly an unwritten rule in technology circles that a lowercase ‘i’ is an indication of high-tech prowess. And the proposed Axiis Liion isn’t taking any chances by packing as many of them as it can into its name.

The Portugese firm is making some pretty ambitious claims for the Liion, which has so far been shown only in these renders. The bike’s claimed to make 134hp at peak, or a continuous output of 74hp, along with 177lbft of torque. Those are numbers that shame even superbike-style electric bikes on the market at the moment, and in a track-oriented supermoto would make for an impressive package. Particularly when combined with the Liion’s claimed weight of 134.1kg. Top speed is claimed to be limited to 124mph.

There’s no word on range, but the bike’s set to be powered by an 11.7kWh water-cooled battery pack.

If it can even come close to those claims when something more tangible than these rendered images is ready to show, then the Axiis will be an electric bike to watch. 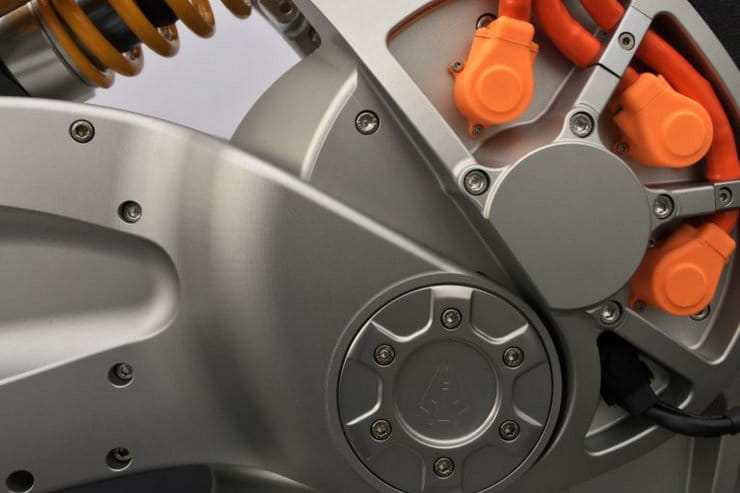 When it comes to impressive numbers, Lightning’s LS-218 electric superbike is a machine that’s managed to actually live up to its claims. That ‘218’ is a marker of the top speed that a prototype managed – in miles-per-hour – at Bonneville, making it about the fastest electric bike on the market.

The Strike promises a 150mph top speed and a 150 mile range, combined with a 35 minute charging time. Those performance numbers, combined with the low price, mean this could be the first electric bike to really stand toe-to-toe with petrol-powered sports bikes.

The latest teaser image gives a glimpse of the electric motor and the swingarm pivot, revealing a swingarm that seems to be identical to the LS-218’s curving alloy part, plus a motor that’s build into the rear section of the aluminium frame, again in line with the LS-218’s design. A remote-reservoir Ohlins rear shock is also on display.

Of course, while Strike prices will start at $12,998 there’s no information yet as to how the price will rise depending on specifications. Will the base model get kit like the Ohlins shock? It remains to be seen.

But with the bike’s official unveiling coming next month, we don’t have long to wait now. 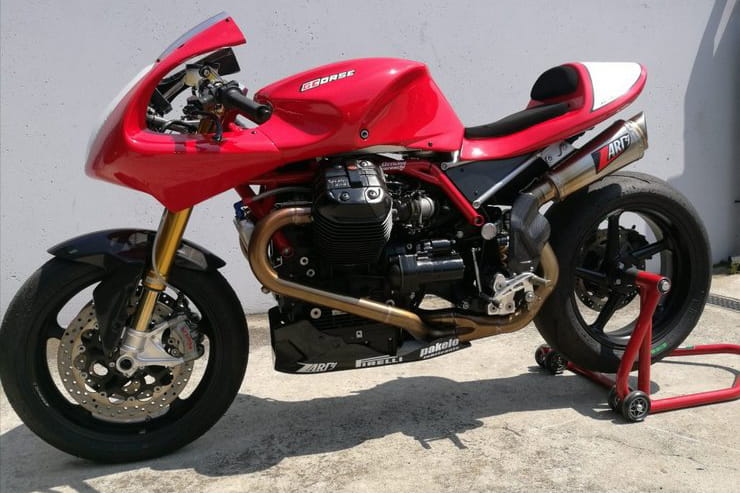 It’s been 15 years since Moto Guzzi launched its MGS-01 track bike, and 13 since it was discontinued, but the idea of a high-performance Guzzi remains a tempting one. Now there’s an option to make your own in the form of this, the GC Corse Varano.

The bike comes from Guareschi Moto – an Italian Guzzi dealer that’s run by Gianfranco and Vittoriano Guareschi. The latter is probably most familiar for his longstanding role as Ducati’s MotoGP test rider, and later sporting director, while Gianfranco took Moto Guzzi’s last true sporting success, winning at Daytona’s Battle of the Twins on an MGS-01 in 2007.

The firm is promising to sell the GC Corse Varano as a conversion kit for 2-valve and 4-valve Guzzi ‘big block’ bikes. It incorporates a tube frame weighing only 7kg, seat subframe, fuel tank, bars, bodywork and dashboard bracket. The styling is clearly inspired by the MGS-01, and while the intention is for the resulting machine to be used on track, Guareschi has built a road-going demonstrator as well to illustrate that it’s possible.

In ultimate spec, the firm has managed to squeeze in excess of 160hp from the classic Guzzi engine, giving the potential for a machine with real superbike levels of performance to go with the new chassis and styling.