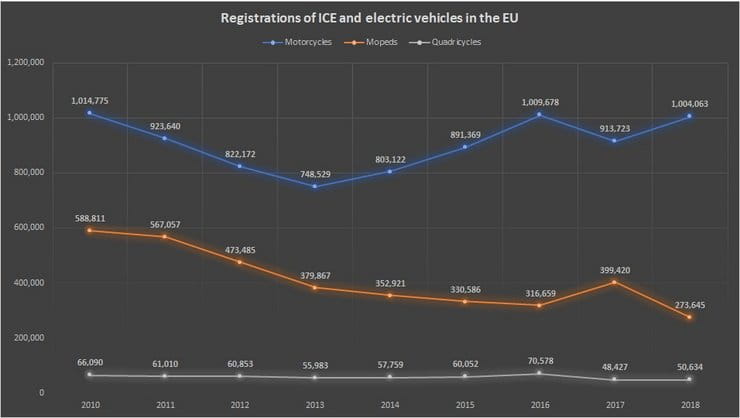 European motorcycle sales edged past the one million bikes mark for only the third time this decade in 2018 – an impressive 9.9% increase compared to 2017.

While motorcycle sales were strong, the ever-shrinking moped market has continued its steady decline, with 273,645 registrations – well under half the number sold per year at the start of the decade.

Antonio Perlot, Secretary General of the European motorcycle association ACEM, said: “2018 has been a positive year for the motorcycle industry, with motorcycle registrations increasing in almost all EU countries, and double digit growth figures in key markets such as Spain and Germany. Notwithstanding the short term fluctuations created by the shift from the Euro 3 to the Euro 4 standard, the European motorcycle market shows a general positive trend since 2013.

“On the other hand, moped registrations in 2018 suffered a significant reduction, largely linked to the effect of the transition to Euro 4. This decline was only partially compensated by higher electric moped registrations. Indeed, although the number of electric mopeds sold increased by 47% on a year-on-year basis, for the time being the absolute volumes remain at niche levels.

“In any event, combined registrations of electric L-category vehicles (i.e. mopeds, motorcycles and quadricycles) do show a clear upward trend since 2011. This is particularly the case for those vehicle segments used for short- and medium range urban commuting and for which electrification is technically easier.” 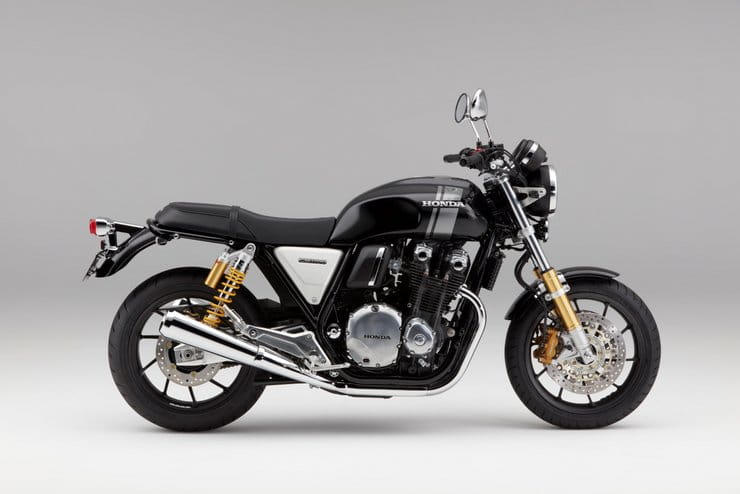 Of course, the lower prices have a knock-on effect on the monthly-payment PCP deals that a vast number of buyers opt for. Honda’s example PCP deals suggest that the EX model could be had with a £1947.41 deposit and 36 monthly payments of £119, followed by a final payment of £4888.89 (on the basis of doing 4000 miles per year). That’s 6.9% APR.

The numbers for the RS are almost identical, with the same £119 monthly payment and just a fractionally larger £2026.73 deposit and £5037.13 final payment.

Even if you’re in the market for a used CB1100, the cut in new prices is likely to have a knock-on effect on secondhand values. Bad news if you’ve already got one, perhaps, but beneficial to buyers.

Honda has also added the new Super Cub C125 and the PCX125 to its PCP deals for the first time. The evocative Super Cub can be yours for a piffling £69 deposit and similar £69 monthly payments for three years at 4000 miles per year. Some of you probably have phone contracts that cost more. The final payment is £1240.81 (6.9% APR). 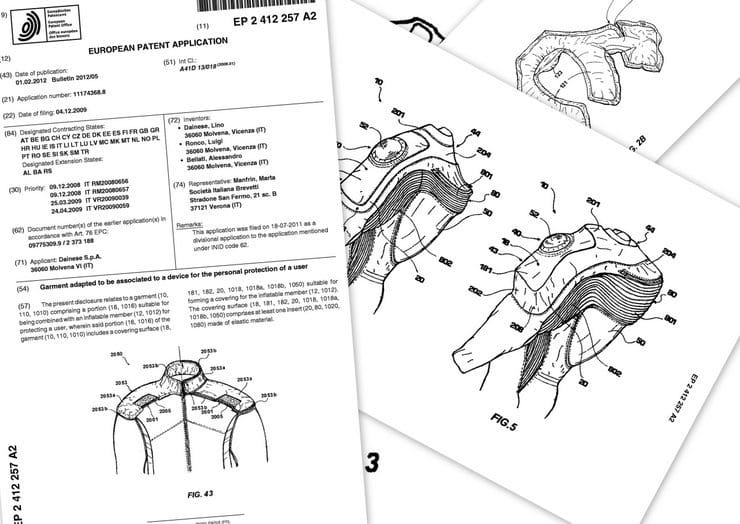 3: Dainese vs Alpinestars in German courts

The Munich Court of Appeal has ruled in Dainese’s favour in its court case against rivals Alpinestars – confirming the earlier ruling made by the Munich Court of First Instance in August 2017 – in a case over Dainese’s airbag vest patent (EP 2 412 257 B1).

The result is that Alpinestars now can’t sell its Tech-Air Street and Tech-Air Racing airbag vests in Germany.

The patent in question is about the layout and packaging of the airbags rather than the technology used to arm or deploy them, and the ruling in Munich only applies to the German market, so Alpinestars is still free to sell its vests in other places. It is also has an appeal pending on the validity of the patent in question at the German Federal Court of Justice.

Furthermore this judgment is limited to the territory of Germany only. It has no bearing on any other territories within Europe or the wider world market where Tech-Air® is available throughout Alpinestars’ Dealer network.

Originally Dainese alleged infringements based on three patents in Germany, none of them refer to Tech-Air® technology: one complaint was withdrawn by Dainese on 22nd December 2016, relating to patent EP 2 373 188, after this patent was revoked by the European Patent Office. The remaining two patents have been contested in Germany. The second, EP 2 373 190, concerning only some specific features of the air bladder used in the Tech-Air® vest, was wholly annulled by the German Federal Patent Court on 15 May 2018. Dainese appealed this decision.

The third, EP 2 412 257 B1, concerning the general installation of an inflatable air bladder construction within a ‘pocket’ of a garment, featuring elastic panels, is the point on which the patent infringement claim was upheld last week. As soon as the Court serves the written judgment, Alpinestars will study the details prior to taking any decision on its next steps.

Alpinestars needs to point out that it has an appeal pending on the validity of this patent (EP 2 412 257 B1) within the German Federal Court of Justice.

As consistently stated throughout this legal process, Alpinestars fully respects and honors third parties’ intellectual property rights and expects the same with respect to its own IP rights. Alpinestars’ highly innovative Tech-Air® products are based upon years of its in house research and development conducted by its own team of leading research and development staff.

Since the very beginning of the Tech-Air® project, which commenced in 2001, the freedom to ride with the most advanced innovations of performance protection has been the objective relentlessly pursued by Alpinestars and the result is uniquely advanced and capable technology. Tech-Air® is the world’s first airbag providing full upper torso protection in a transferable vest which incorporates a completely independent electronic management system, with no reliance on any external devices (sensors or GPS), to give accident detection and full airbag inflation before the first impact, dual charge for the track and off-road capability as demonstrated in the 2019 Dakar Rally. 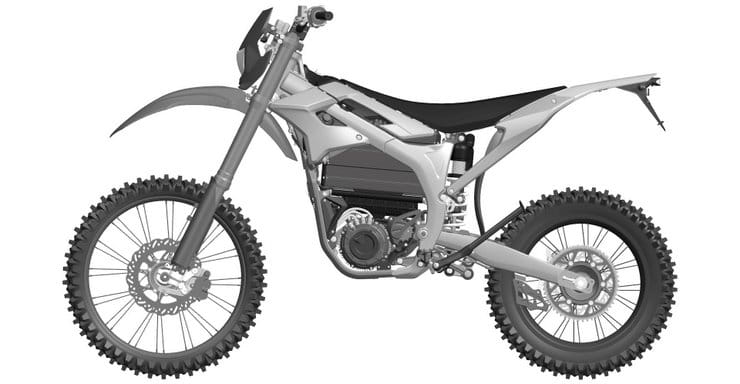 The Chinese motorcycle market is overflowing with electric bikes and scooters but Sur-Ron is a brand that stands out there as having rather more accomplished designs than most.

The firm already sells a small, mountain bike-style electric off-roader – the Light Bee (surely a mistranslation of ‘Firefly’ unless they’re avid Red Dwarf fans), which is very similar to the concept that Harley-Davidson revealed last month. It’s also nearing the market with a road-going electric naked bike, the White Ghost (again, an odd translation of ‘Angel’). Both designs stand out from the crowd with relatively advanced, cast-aluminium frames and distinctive styling, and Sur-Ron has plans to bring the White Ghost to the European market once production is underway.

Now the firm has gained IP protection for the styling of another electric bike, this time a rather convincing-looking enduro model (pictured). Of course, there aren’t any specs available, but it’s clearly got a modern, motocross-inspired alloy frame and swingarm, but road-legal accoutrements including a licence plate bracket and lights.

While established European and Japanese firms appear to be dithering on the fringes of the electric bike market, is it possible that the first really credible, mainstream electric options are going to emerge from China instead? 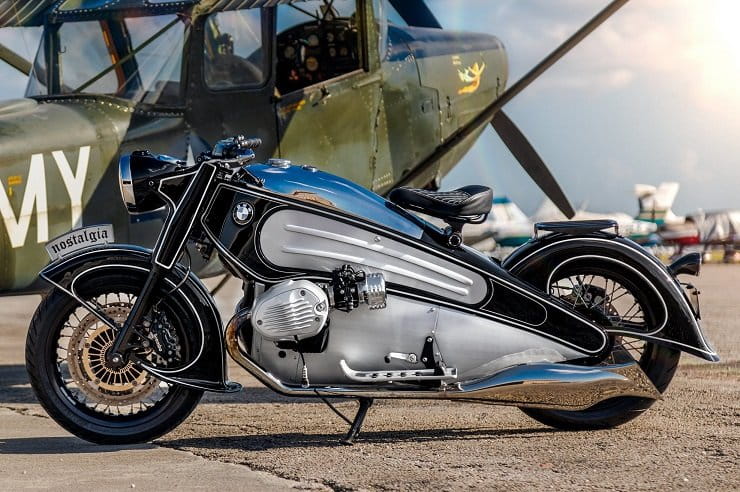 Remember the Nmoto Nostalgia that we showed you back in December? Well the BMW R NineT-based machine, which mimics the styling of the one-off BMW R7 prototype from the 1930s, has gone into limited production, even getting an order from musician Billy Joel.

Based on the running gear of the R NineT, the Nostalgia uses 96 handmade components to transform its appearance into an Art Deco-inspired cruiser slathered in aircraft-spec aluminium panels. The combination of pre-war looks and modern engineering, electronics and suspension is unique. It was officially unveiled at the New York International Motorcycle Show in December.

The bikes are being made to order, with a base price of $49,500 in America and a waiting time of between three and six months for delivery.

With BMW expected to launch its own range of cruisers in the near future, based around a completely new 1600cc air-cooled boxer twin engine, the German firm is likely to be keeping a close eye on the progress of the Nmoto Nostalgia.

Nmoto founder Alexander Niznik said: ““The response in New York was tremendous. We had a lot of interest from the public and the media, a lot of positive feedback, and we’re already taking orders, including from famed musician Billy Joel and renowned BMW historian Peter Nettesheim.”