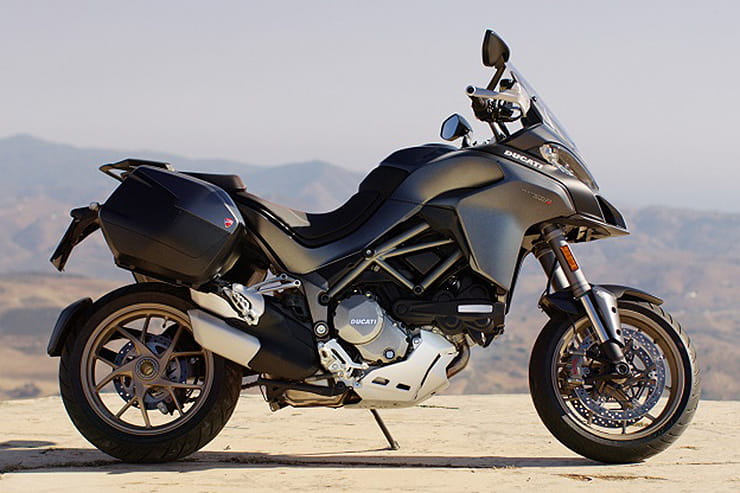 This is Ducati’s existing ‘Touring Pack’ on a Multistrada. The new Multistrada 1260 S Grand Tour will be a more serious long-distance bike

Browse through Ducati’s model range and it’s instantly clear that despite the firm’s image as a superbike specialist its line-up is actually incredibly wide. Naked bikes, retros, cruisers, adventure bikes and even supermotos sit comfortably alongside the headline-making superbikes but there’s a glaring omission: Ducati’s range currently has no dedicating touring bike.

That hasn’t always been the case. Whether it was the ST2 from the 1990s, its ST3 and ST4 siblings or, most recently, the Multistrada 1200 S Touring, there’s normally been a tourer in the line-up for the last few decades. Next year there will be one again courtesy of the new Multistrada 1200 S Grand Tour. Although not officially announced yet, the 1260 S Grand Tour is set to sit near the top of the Multistrada range, and its existence has been betrayed by newly-published type-approval documents from the US Environmental Protection Agency.

Although the type-approved specs only confirm that it will use exactly the same 1262cc, 158hp V-twin as the rest of the Multistrada 1260 line, the new bike’s name reveals pretty much all we need to know. It’s based on the 1260 S, so it has the semi-active Sachs suspension in Ducati’s ‘Skyhook’ setup, and kit like cornering lights will be standard. The ‘Grand Tour’ name also means we can take it as read that panniers and a top box are likely to be fitted as standard, probably accompanied by a taller screen and perhaps a more comfortable seat.

The second new model that’s revealed by the new EPA filings is the 2020 Ducati Scrambler Icon Dark. Technically identical to the recently-uprated Scrambler Icon, the Dark’s name leaves no doubt that its main change is going to be cosmetic. With the current Scrambler Icon offered only in garish shades of yellow and orange, the addition of a ‘Dark’ version – mimicking the long-running line of Ducati Monster Dark models by using matte black paint  - will provide a very different aesthetic.

Both bikes are sure to be little more than side notes to Ducati’s main new model launches for 2020, expected to include the new Streetfighter, Panigale V2 and Multistrada V4, when the firm unveils its new range on 23rd October, but they’ll be welcome additions nonetheless.