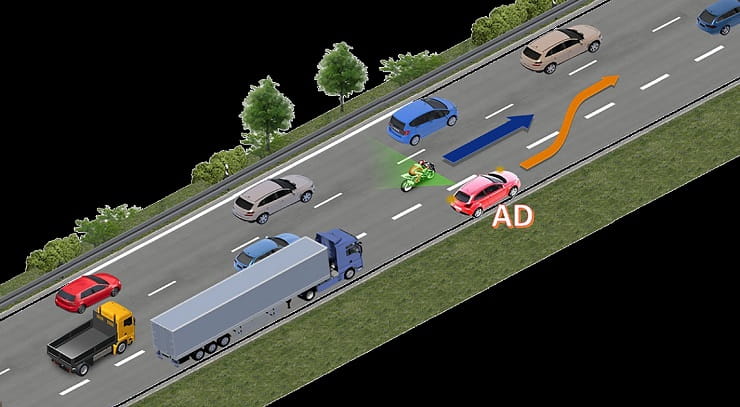 The European motorcycle industry association – ACEM – has released an official ‘position paper’ about the increasing number of advanced driver assistance systems (ADAS) in use on cars.

The document, titled ‘How will automated cars impact motorcycle safety?’ flags up concerns about the driver assistance systems that are proliferating on modern cars, particularly that the sensors they use aren’t well suited to ‘seeing’ motorcycles that they share the roads with.

The paper points out that among vulnerable road users (VRUs), motorcyclist are the only ones who “share all kinds of road and traffic environment conditions, including full velocity range with cars.”

It goes on to say: “The systems work quite well in some situations, such as detecting larger objects, with a defined or standardised shape, such as cars, trucks or traffic signs. However, the detection of smaller dynamic objects presents challenges to sensors and algorithms, just as it presents challenges to human perception. Therefore, automated systems should significantly improve the detection rate of motorcycles.

“Due to their many different shapes and vehicle dynamics when compared to cars, as well as their small surface area, motorcycles pose an enormous challenge to the developers.”

The paper refers to a 2016 test carried out in the Netherlands on the request of the Federation of European Motorcyclists’ Associations, the Royal Dutch Motorcyclists Association and the Motorcycle Action Group, which it says showed unsatisfactory results.

The paper says: “In some cases, modern cars do not have robust enough equipment to detect motorcycles. Several accidents in Europe and the US with cars ‘on autopilot’ indicate that some cars failed to detect motorcycles in all situations. Today, in some driver handbooks, one can find statements such as “the system may not detect small vehicles like motorcycles”, which is simply not acceptable from a safety point of view.”

ACEM, which is made up of companies including BMW, Bombardier, Ducati, Harley-Davidson, Honda, Kawasaki, KTM, KYMCO, MV Agusta, Peugeot Scooters, Piaggio, Polaris Industries, Quadro Vehicles, Renault, Royal Enfield, Suzuki, Triumph and Yamaha as well as 17 industry associations across 15 European counties, says it is ‘open to discussion’ with the car industry and legislators to ensure that the issue is addressed as the ongoing automation of cars progresses.