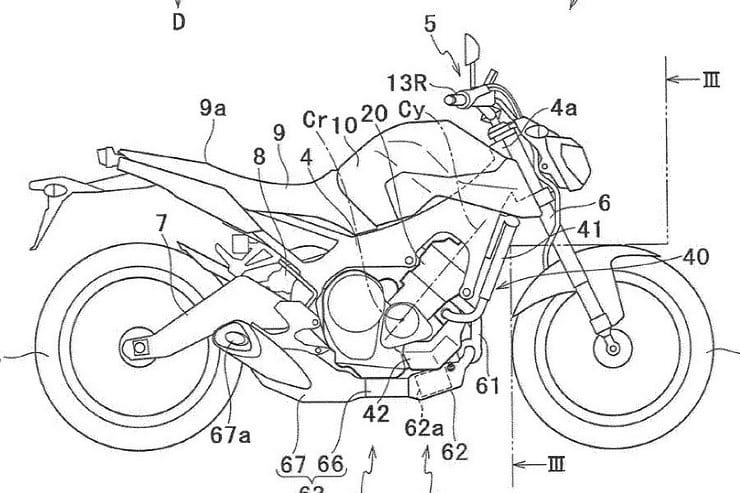 Yamaha is working on plans for a turbocharged parallel twin cylinder bike derived from the MT-09’s 847cc triple.

For the last five years or so there’s been an increased focus on forced-induction bikes as manufacturers grapple with how to increase performance in the face of tightening emissions restrictions. Kawasaki’s H2 and H2SX have been at the vanguard, bringing engine-driven superchargers to motorcycles for the first time since WW2, while Suzuki has been beavering away on a production derivative of its 2013 Recursion concept bike for half a decade now. Honda, while staying quiet about it, has also filed a host of patents regarding a variety of turbocharged motorcycle designs.

Yamaha, meanwhile, has so far appeared to be steering clear of the whole idea of forced induction. But not anymore; a newly-published patent application reveals that it, too, is working on a boosted bike. 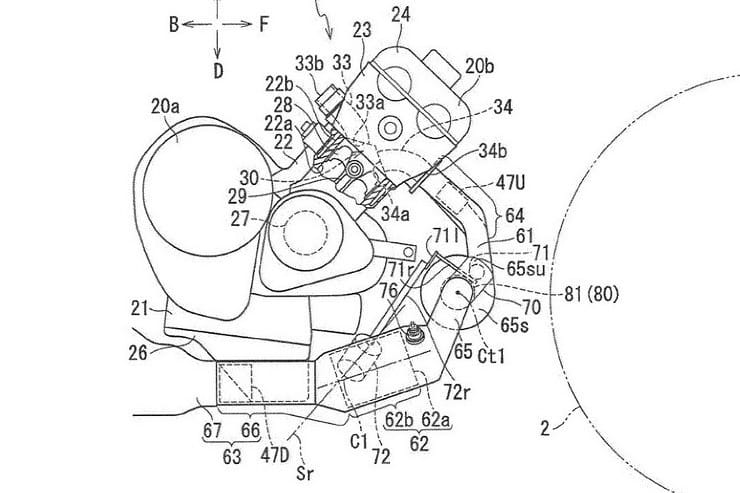 The patent application has only recently been published by the European patent office, but the wheels of intellectual property turn slowly so it’s clear Yamaha’s engineers actually drafted the document nearly three years ago. It was filed in Europe back in 2017, and an earlier version of the document was put into the Japanese patent system back in 2016.

Often, these delays mean that by the time a patent application is published, the bike it refers to has already reached showrooms, but when it comes to creating something as radical as a forced-induction motorcycle the development period is longer than a normal motorcycle. For instance, the earliest Kawasaki patents for a supercharged four-cylinder sports bike emerged in 2010, a full five years before the H2 reached production, and Suzuki has spent five years working on the Recursion and there’s  still no certainty as to when it will be launched.

Yamaha’s design is clearly much closer to the Suzuki Recursion in concept than to the Kawsasaki. Not only does it rely on an exhaust-powered turbocharger instead of a mechanically-driven supercharger, but the layout – a relatively conventional DOHC parallel twin with a turbo mounted close to the exhaust ports in front of the engine – closely mirrors the Suzuki’s design.

As is so often the case, the patent that reveals the plans actually revolves around a mundane design aspect – after all, the idea of a turbocharged motorcycle isn’t novel enough to be patentable. In this instance, the patent relates to a subtlety of the actuation of the turbo’s wastegate (the valve that releases excess boost pressure when it’s not needed). However, by showing an interest in engineering such a small element of the turbo system, Yamaha is revealing that it’s carrying out a much wider project to develop a turbocharged bike. 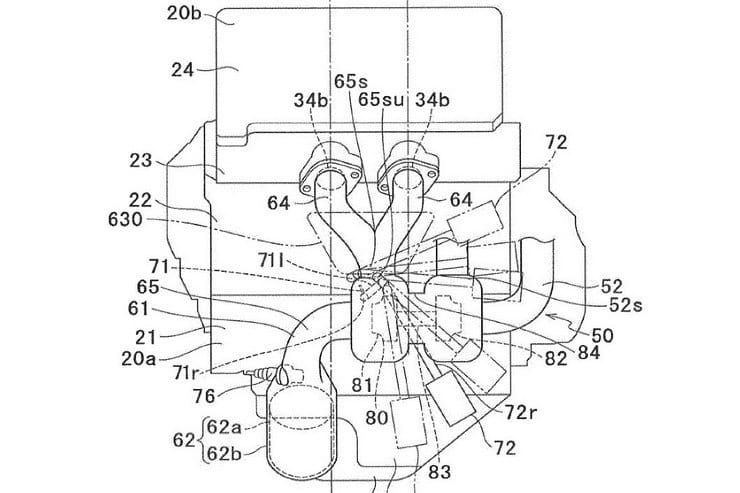 The patent specifies that the engine is a four-stroke, water-cooled parallel twin, and the drawings reveal that it’s closely related to the 847cc triple fitted to the MT-09. Indeed, the outline of the bike itself appears to be that of an MT-09, although much of that is likely to be a placeholder rather than an accurate representation of the bike under development.

If Yamaha really has lopped one cylinder off an MT-09 engine, the result will be a 565cc twin, somewhat smaller than the 689cc MT-07’s two-cylinder engine and very close to the 588cc that Suzuki claimed for its original turbocharged Recursion concept bike back in 2013.

In performance terms, the turbo should be able to add at least a 50% power boost, which would bring the Yamaha engine’s performance back to around the same 118hp that the MT-09 offers. However, at lower speeds the reduced capacity would give an improvement in fuel economy and emissions when compared to the larger, normally-aspirated triple.

Tracing the latest patent application back reveals several other patents, filed all over the world, that also relate to the turbo Yamaha and that its designers include members of the original MT-09 design team. In fact the option of adding a turbocharger is mentioned in some other patents relating to the MT-09’s own design, suggesting it’s an idea that’s been floating around since the MT-09 was first envisioned. That the latest patent is focussing in on a detail of the wastegate actuation suggests there’s some in-depth development of the idea underway. 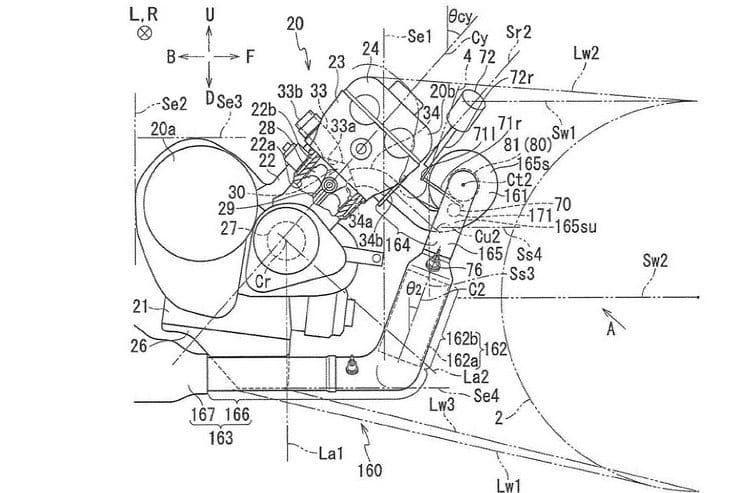 The newest patent shows two variations on the idea of the turbo bike, with a subtle difference in the turbo’s position.

In the first layout, the turbo is mounted fairly conventionally, with the exhaust headers running down from the cylinder head, joining into a single pipe and feeding into the turbine mounted in front the lower part of the engine, just behind the front wheel.

In the second design (above), the turbo is mounted higher up, in front of the cylinder head. The exhaust headers are shorter still and feed straight into it. This layout appears to allow more space for a catalytic converter to be mounted in front of the engine.

On both versions, the compressed air from the turbo is fed through a water-cooled intercooler before going into an intake plenum to feed the cylinders.

The future of forced induction on motorcycles still appears to hang in the balance. While emissions rules are pushing designers towards ideas like turbos to help boost power and reduce emissions, the difficulties in making turbos responsive enough for motorcycles remain. The latest Euro 5 emissions rules, coming into force in 2020 and 2021, could be a catalyst to bring boosted bikes to the fore, but at the moment there appears to be a trend towards a solution using variable valve timing and lift – like BMW’s ShiftCam system – while the enthusiasm for boost seems to be waning.

As those emissions rules come into force, the chances of seeing turbocharged bikes increase significantly, though, and as with other technologies like ABS and traction control, once external suppliers building turbochargers and their control systems become more capable of supplying systems suited to motorcycles, they could yet become a significant tool in the bike designer’s arsenal.