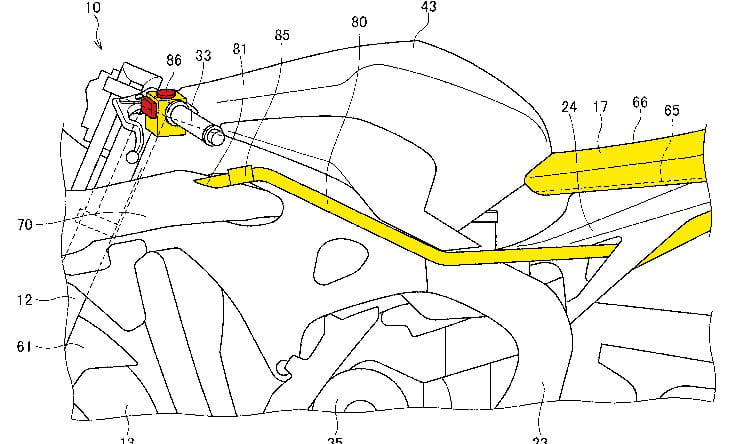 Heating systems used to be optional extras on cars but customers wouldn’t stand for that these days. And perhaps the same is going to happen on bikes in the future because Honda is developing a system to keep your backside at a pre-set temperature and to let to change it with a simple bar-mounted switch.

No, it’s not a belated April Fool, this is a real patent application from Honda. What’s more, the document confirms that the design has already been built and successfully tested.

It’s actually remarkably simple. The testbed appears to have been a 2012-2016 model Fireblade, but the idea would work on virtually any bike. The system is clearly inspired by the setups used on cars for decades, and involves using fresh air for cooling or hot air from the engine’s radiator to warm you up.

The key elements are a new seat, made using a plastic mesh material to allow air to flow through it while still being resistant to the elements, along with a pipes to duct air from the front of the bike to the seat. One pipe runs to the ram air intake, where it can take high-pressure cold air and blast it through the seat to cool your backside on warm days. Another pipe runs to the bike’s radiator and ducts hot air to the seat to warm it when you’re cold.

A bar-mounted switch unit lets you control valves in the pipework, altering the volume of air going through and letting you blend the hot and cold air feeds to get exactly the temperature you need.

As well as revealing how the system works, the patent application’s text refers to tests carried out in wind tunnels, with graphs to show how quickly the seat can reach ‘target’ temperatures when switched to them, so it’s clear Honda’s engineers have already built prototypes that work exactly as planned.

It would be surprising to see a system like this emerge on a Fireblade, as shown in the patent, but it’s easy to imaging bikes like the Gold Wing getting this sort of kit.