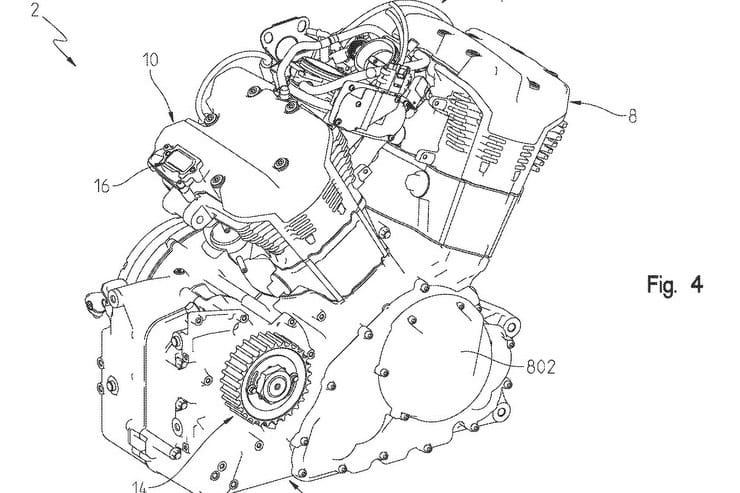 Indian is readying a new large-capacity water-cooled engine that could eventually replace its air-cooled Thunder Stroke III as the core power unit for the firm’s range of big cruisers and tourers.

At the moment, Indian’s offerings are based around three engines; the Scout’s water-cooled, DOHC unit, the FTR1200’s sportier water-cooled V-twin and the aging air-cooled Thunder Stroke III that powers the Chief, Chieftain, Springfield and Roadmaster ranges. Despite being the biggest of Indian’s engines, at 1811cc, the Thunder Stroke’s design means its peak power is actually lower than that of some of the firm’s smaller, water-cooled twins.

The new design, which is revealed in the patent images you see here and has also been spotted testing in a prototype bike, should address that issue as well as ensuring that Indian’s largest bikes are emissions-legal for the foreseeable future despite tightening regulations.

While the existing Thunder Stroke 111 – named after its 111 cubic inch (1811cc) capacity – isn’t an old design, having debuted in 2013, it’s firmly in the traditional cruiser mould; air-cooled, with pushrod-operated valvegear and a slow-revving, torque-focussed character. The new engine appears to be similar in capacity, somewhere in the region of 1800cc, but adds water cooling and four-valve, overhead-cam cylinder heads. Each head has a single camshaft mounted low between the valves, acting on rockers mounted above it to operate two intake and two exhaust valves. As a result it’s much more compact than a DOHC head, as used on the Indian Scout and FTR models, and little larger than the pushrod OHV heads of the Thunder Stroke. That’s important, as small cylinder heads are the key squeezing huge cubic capacity engines into V-twin cruisers without making the engines excessively tall and long.

Although it’s water-cooled, Indian has gone to lengths to make sure the engine isn’t cluttered with pipework. There are still cooling fins on the cylinder heads, and the water pump is tucked into the V of the cylinders. There’s still going to be a big, clearly visible radiator on view, though.

Water-cooling will inevitably improve the ability to control engine temperatures, allowing a higher state of tune to be used without risking the engine’s health, while the SOHC four-valve heads will allow for higher revs, better breathing and more peak power than the old pushrod design. Not that this will be a fire-breathing monster of an engine; rumours in America put its power at around the 120hp mark, allied to huge globs of low-end torque. It’s clearly a relatively high-compression design, as the patents include an automatic decompression system to assist the starter motor’s task when getting the thing going.

The bike that the engine has been fitted to is revealed in a lone spy shot to be a machine along the lines of Harley-Davidson’s Road Glide, with a fixed half fairing and forward-slanted headlight. A large, spindly front wheel is used along with upside-down forks and radial-mount Brembo brakes. The engine is fitted in a cast aluminium frame that appears to have a similar design philosophy as that used on the Scout, with a large radiator leaving no doubt as to the bike’s water-cooled nature.

All indications are that the bike is nearly ready for launch. The prototype that was spotted had padded disguise panels Velcro’d to the bodywork to hide its details, but components like the exhausts appear to be finished to a production standard. A small sliver of headlight that’s visible suggests a complex design with LED running lights built in and chrome highlights splitting the lens into multiple elements.

That means we’re sure to see the new bike, and its water cooled engine, revealed officially later this year and the first production models hitting showrooms in 2020. 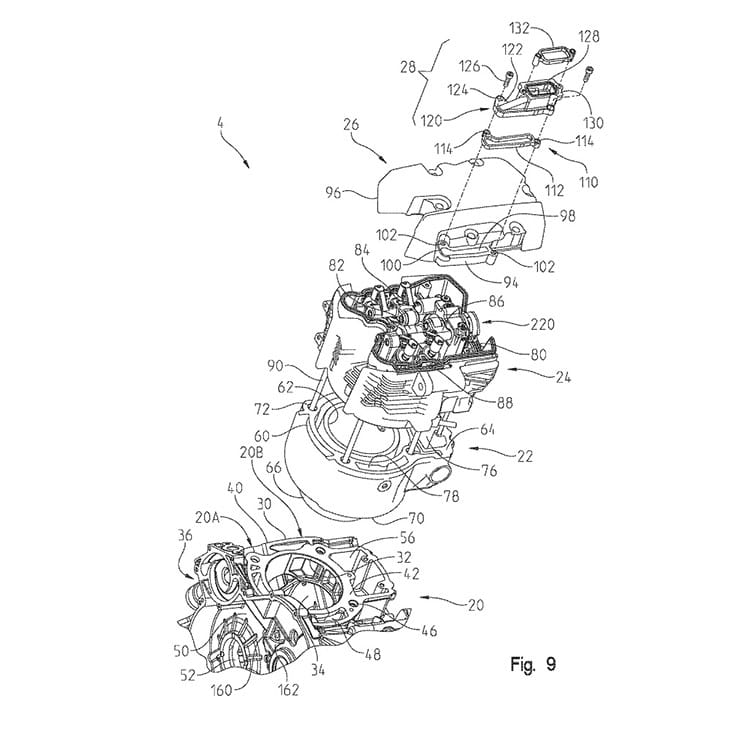