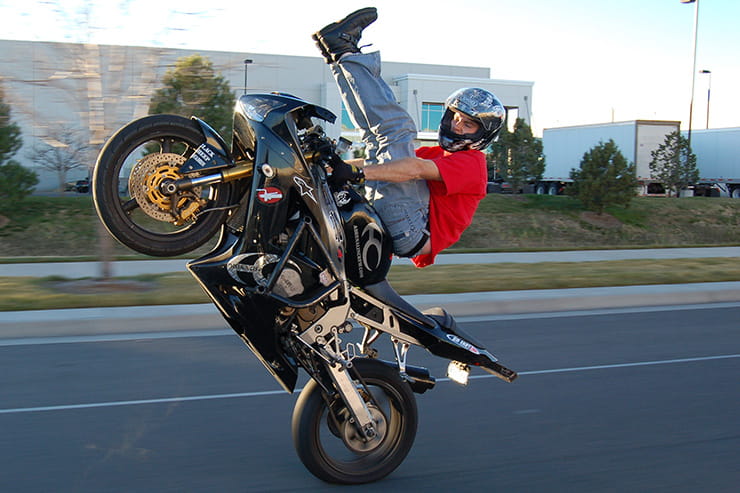 A 26-year-old man has become the first to be convicted and sentenced under France's tough new ‘anti-stunt’ laws, which came into effect at the beginning of August.

The French police, as in most countries, already had the power to arrest and charge riders for various offences of dangerous riding or refusing to stop, but this legislation makes it a separate offence to take part in what the French government call ‘Urban Rodeos’.

The new rules specifically target anti-social behaviour – not just from motorcycles, but any vehicles that “...compromise the safety of other road users or disturb the public peace.” According to Jacqueline Gourault of the Ministry of Justice, the new law “Finally gives a clear definition, allowing us to specifically target these rodeos, and making it easier for the forces of order to form charges. In addition, it also defines penalties which are directly proportional to the seriousness of the offence.”

For the record, the text of the new law defines the offence as, “Intentionally adopting, by means of a powered vehicle, repeated behaviour which constitutes a violation of the individual's specific obligations towards safe conduct and due care [and that] compromises the safety of other road users and disturbs the public peace.”

That is a very wide definition, and deliberately intended to give the Police the widest possible pretext for arrest. And the consequences are far from trivial.

In this case, the culprit was showing off his stunting ability in the streets of Sannois, a suburb of northwest Paris – pulling wheelies through traffic while not wearing a helmet. He refused to stop for the Police, and tried to escape through the city's pedestrian areas, where a chase by car wasn't possible (or authorised under French law). But the Police caught up with him again on the other side of the town centre, and this time when he tried to escape, he crashed and was arrested. His motocross bike was confiscated, and he was sentenced to six months in prison.

What’s the fine for stunt riding in France?

The maximum penalty for the basic offence is a year's jail and a 15,000 Euro fine (about £13,400), as well as confiscation of the vehicle. The maximum prison term is important – it's serious enough under French law that the Police have the power to immediately take the offender into custody pending trial, which isn't the case for most other motoring offences. This reduces the chance that the offender will simply disappear back into the city and not show up for trial and sentencing. The new law also covers private land, and vehicles that aren't in the registration system, which again extends the Police's ability to intervene.

And it's not just taking part in a 'rodeo' that's going to get you into trouble these days – helping to organise one, or promoting it on social media, is also now specifically punishable.

At time of writing, a 20-year-old man was awaiting trial for a similar offence. Pulling wheelies on his scooter, with no helmet, in a pedestrianised area, he was caught on CCTV cameras that followed his progress until he could be arrested 20 minutes later. He's unlikely to get off with as little as six months' jail, as reportedly he also tested positive for drink and/or drugs. If proved, that would raise the potential sentence to a maximum of three years inside, and a 45,000 Euro fine (about £40,200).

Still not harsh enough? That's for an offence committed by an individual – the law allows extra penalties for 'collective acts' and for committing several offences at once. So for example taking part in a 'rodeo' with others, while drunk or high, could see you banged up for a maximum of five years, with a 75,000 Euro (£67,000) fine to pay...

All of which might sound extreme, but France – and in particular the suburbs of Paris and other big cities – has seen a huge rise in illegal street stunting gatherings in recent years. According to a report compiled by Natalia Pouzyreff, a government research officer, and put before the Assemblée Nationale (France's parliament) during the debates on the new law, over 9,000 'Urban Rodeos' were reported by police in 2017, and a further 6,000 by the Gendarmerie.

What bikes are being used for stunts?

As in the UK, the bikes used are often stolen, and there are other links to moped muggings and bike theft gangs.

At least four stunters died in 2017, with many more seriously injured, but it's fair to say that wasn't the reason for the law – few politicians are going to spare any tears for injured hooligans.

The perceived danger and nuisance to the general public, and the threat to public order – confrontations between Police and stunting gangs have on occasion turned into fully-fledged riots – is a more persuasive motivation. The government is taking this as the thin end of a wedge of potential lawlessness and civil unrest, and clamping down ruthlessly.

In addition to the new law, France is also considering making it compulsory to have some kind of competition licence or proof of professional use before being allowed to buy race bikes, dirt bikes or any other leisure or work vehicle that doesn't need to be road registered. It's all part of what Mme Gourault calls, “A policy of repression.” She goes on to say, “This government is determined to use all the means in its power to end this nuisance.”