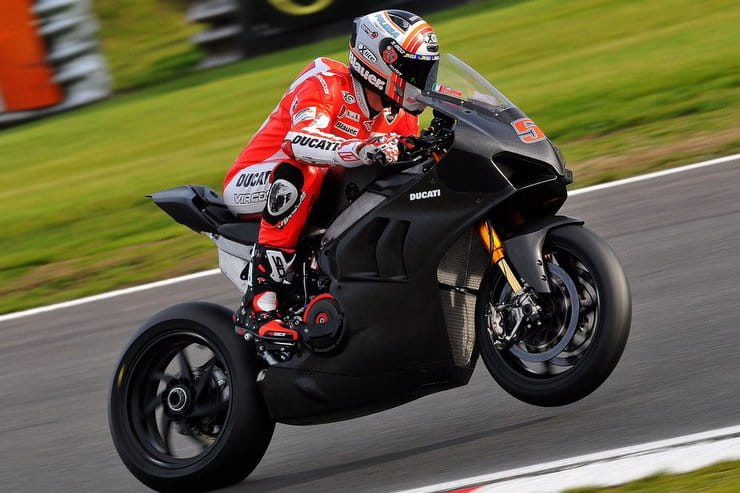 There’s little question that Ducati’s Panigale V4 has proven itself as the stand-out bike of 2018 and its success means we’re left wondering: if the basic Panigale V4 is that good, how amazing will 2019’s homologation special Panigale V4R be?

At the British Superbike season finale the firm gave us a hint of an answer, wheeling out a race-spec prototype of the V4R at a soggy Brands Hatch for a couple of demo laps with test rider Michele Pirro at the helm.

This is the machine that Ducati hopes will bring it back to the top in WSB, with the existing V-twin Panigale ending its racing career at the close of 2018 as the only top-line Ducati superbike in the last 30 years not to bring home the championship trophy at least once. It’s a huge leap for Ducati, which is casting aside the twin-cylinder layout and the capacity advantage that superbike rules grant it in favour of a four-cylinder, sub-1000cc bike.

Of course, that sub-1000cc element is the part that most clearly sets the Panigale V4R aside from the mass-produced Panigale V4 and V4S models. While they buck traditional, race-mandated capacity classes by using an 1103cc motor, the V4R will need to bring that down to 1000cc or less to compete, with the change reflected in the 500 or more road-going models made to gain homologation. 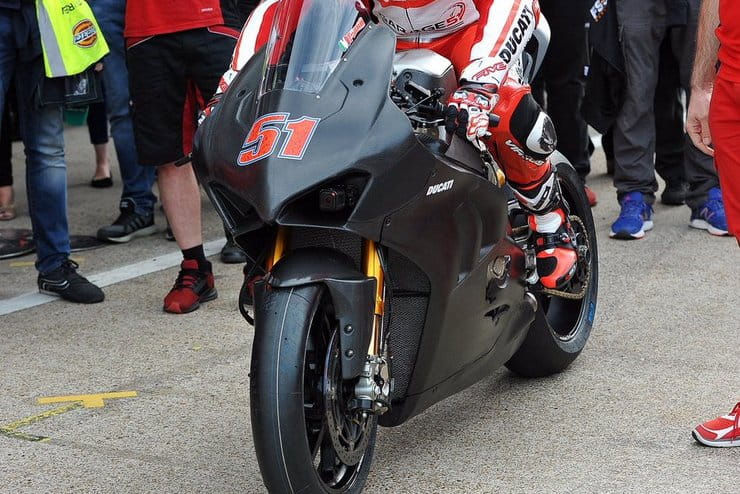 While downsizing its V4 engine to 1000cc isn’t going to be a big challenge for Ducati, either by using smaller bores or, more likely, by adopting a shorter-stroke crankshaft, the WSB rules might not play into the hands of that other traditional Ducati strong point, its Desmo valve system.

On the firm’s successful V-twin racers, the Desmo set-up, which uses cams and rockers to close the valves instead of relying on valve springs like every other bike on the grid, traditionally gave an ability to rev higher than other, similar designs. Since, in simple terms, the higher an engine can rev, the more power it can make for the same capacity, Desmo offered an edge. Particularly since, by using an oversized V-twin instead of a four-cylinder, Ducati already had an edge in terms of torque.

However, with current FIM regulations dictating specific rev ceilings for each entrant and adjusting them to achieve parity between rival bikes, the Panigale V4R isn’t going to be able to rev higher than rivals with conventional valve springs. While Desmo may still offer an advantage in terms of reducing parasitic losses, with the engine not needing to work against stiff springs every time it opens a valve, it’s not likely to be a decisive edge. 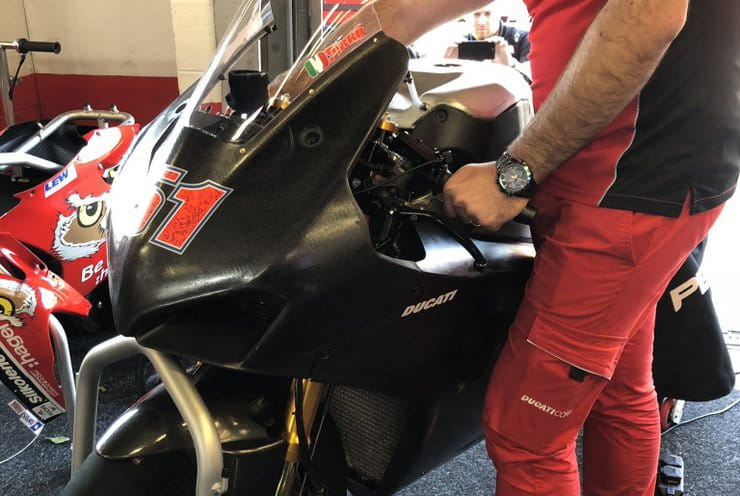 So, what can we make out from the V4R prototype wheeled out at Brands?

First, there’s the fairing, which is notably changed compared to the stock Panigale V4. Twin, gill-style air outlets on either side replace the single slash-cut air vents of the lowlier Panigale V4, suggesting improved cooling for the race-spec engine hiding behind them.

Of course, these fairing panels aren’t necessarily final; Ducati CEO Claudio Domenicali has hinted that the Panigale could gain a MotoGP-style aero package, presumably meaning that winglets are on the agenda. Tweeting after the MotoGP win at Misano in September, he said: “Ducati Corse improved a lot and learned many things. Cannot wait to release all this to our future versions of production V4’s. Frame stiffness, swing arm construction, traction control strategy, aerodynamic package...”

However, that tweet could also be interpreted as meaning the future V4 will get a carbon swingarm like the GP bike, and that’s clearly not evident in the prototype pictured here.

If Ducati does want to use MotoGP-style wings, it needs to put them on the road-going Panigale V4R. FIM regulations say: “Wings and other aerodynamic aids will only be considered legal if originally fitted to the homologated road specification machine in all of Europe, Japan and North America.”

Underneath those new side panels, there’s a distinctive bellypan, but this is a race-only part that won’t be carried across to the road-going Panigale V4R. FIM rules state that bellypans used on track must be able to contain oil and water leaks, with a capacity of at least 5 litres or half the total amount of oil and water used in the bike – whichever is greater. On the racer, Ducati can also use loud exhausts without catalytic converters, tucking the whole lot inside the new bellypan.

When it comes to the road bike, we’re likely to see something more akin to the stock Panigale V4’s under-belly exhaust, where the silencers and cats are sculpted to form the rear section of the bellypan.

The race prototype’s suspension and brake components can’t, unfortunately, be used to gauge what will feature on the production model. While it’s safe to assume the road bike will get Ohlins and Brembo kit, they won’t be the racing parts seen here.

That’s not just because these are parts designed for the track but because the Panigale V4R isn’t allowed to be a money-no-object bike like the V-twin Superleggera was. WSB rules say that the homologation machines that the racers are based on can’t cost more than €40,000 – that’s around £35,000, which is the same price as the existing Panigale V4 Speciale or the 1299 Panigale R Final Edition V-twin. On top of that, WSB teams can spend limited (but large) amounts on upgraded suspension parts – including up to €10,000 on forks and €6500 on a rear shock. It’s those expensive parts we’re seeing here, not the showroom bike’s cheaper versions. 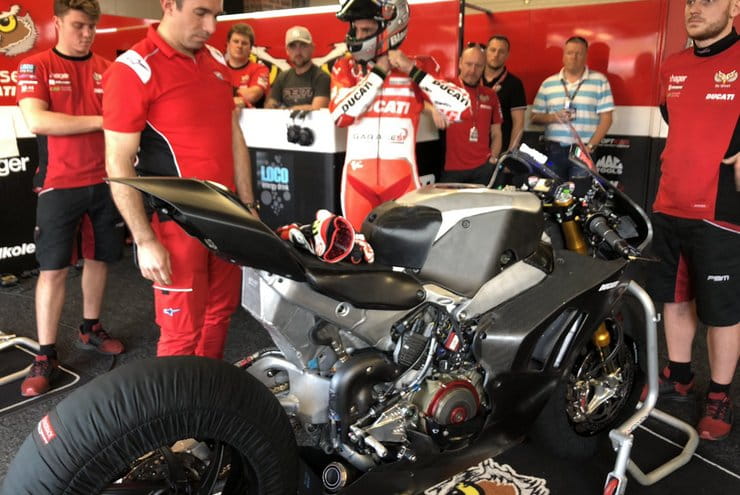 While the hand-welded under-seat fuel tank visible on the race prototype isn’t going to be representative of the part used on the road-going V4R, the bike does sport a unique, cast-aluminium subframe that is likely to be shared by the production version.

As well as making space for the enlarged tank, the subframe isn’t designed to carry the weight of a passenger, so it’s shorter and no doubt lighter than the stock Panigale V4’s part.

We don’t have long to wait now before we see the final, production version of the Panigale V4R, which is set to make its debut on November 4 when Ducati will reveal its 2019 models via an online unveiling at 7pm CET (6pm BST), prior to their appearances at the EICMA show in Milan from November 8.