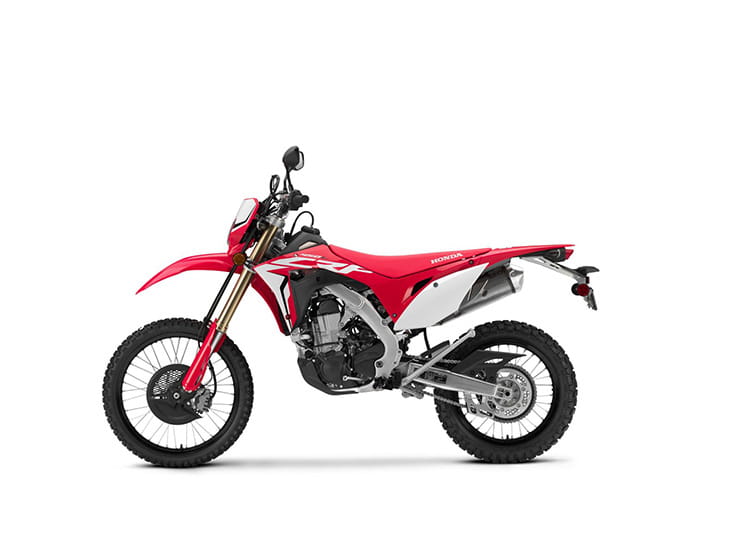 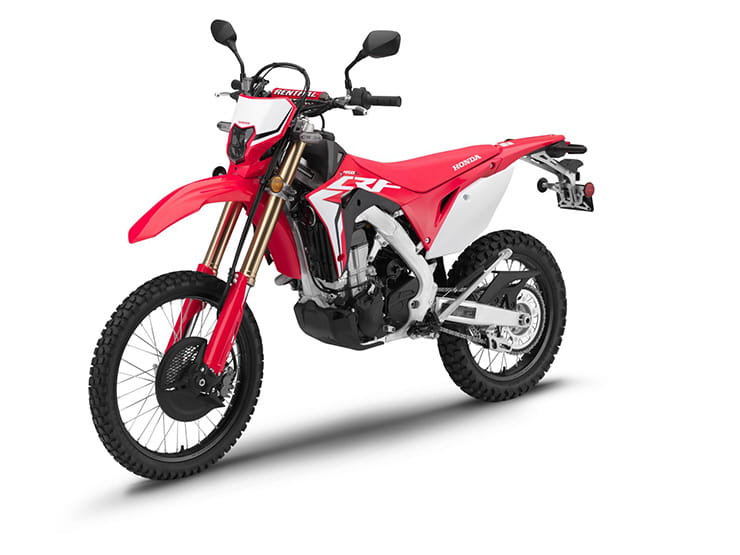 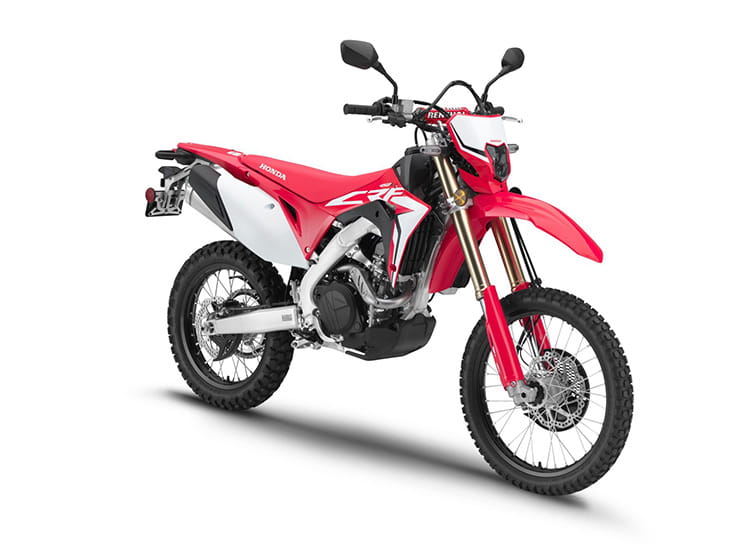 Given the interest in road-going ‘adventure’ bikes with mud-plugging ability it’s surprising that relatively few firms offer road-going versions of their full-fat motocross machines. But Honda has just launched exactly that, the new 2019 CRF450L.

While the name puts it alongside the CRF250L in Honda’s line-up, the new 450 is a very different machine. Where the CRF250L is an off-roader powered by a road bike engine – it’s the same 250cc single as used in the old CBR250R – the new CRF450L is closely related to the competition-spec CRF450R. 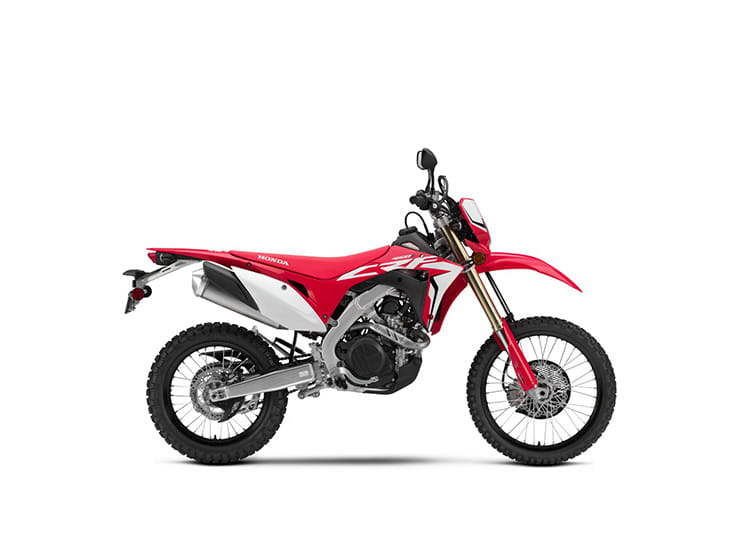 The engine is basically the same unicam competition engine that’s used in the CRF450R, but detuned to make it road legal and give the sort of longevity that road riders will demand.

Changes include a reduced compression ratio – 12:1 instead of 13.5:1 – and a heavier crankshaft and new cam profiles. It’s got an electric start, of course, and unlike the competition machines uses a six-speed gearbox instead of a five-speed.

Of course, passing emissions tests means that the exhaust is changed, and there’s extra cladding on the engine, probably to help cut down on mechanical noise. 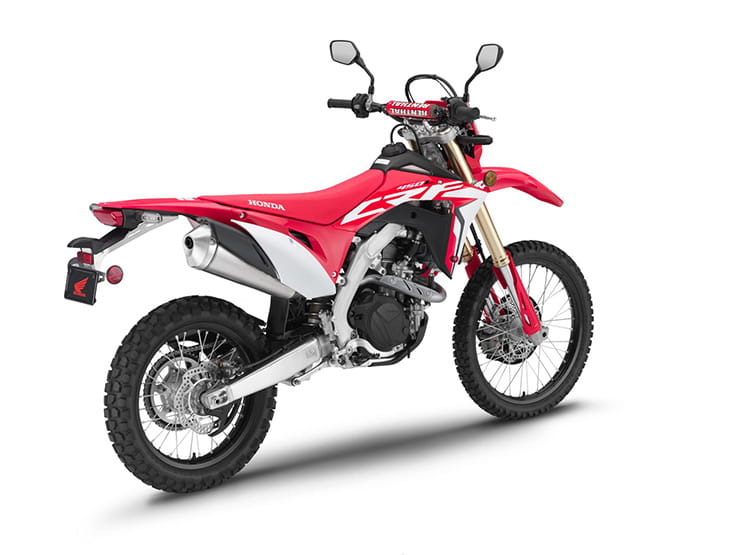 The engine isn’t the only element to be revised. The frame is near-identical to the CRF450R’s aluminium beam, but it’s wider at the bottom to help accommodate the new six-speed transmission. There’s also a side stand, mirrors and full LED lighting. A licence plate bracket at the back, a horn and some rudimentary instruments complete the road-going transformation.

The fuel tank’s size is also increased to extend the L’s range compared to its out-and-out competition brethren.

Suspension-wise, it’s high-end. Up front there are 49mm Showas, with a Pro-Link monoshock from the same supplier at the back. Both are pretty much what you’ll find on Honda’s motocrossers, albeit with dedicated settings for the road-legal CRF450L. Similarly, the brakes are borrowed from Honda’s crossers. From the limited information currently available it’s not clear yet whether Honda has circumvented the EU requirements for mandatory ABS – there’s a potential loophole that exempts vehicles ‘intended for off-road use’. 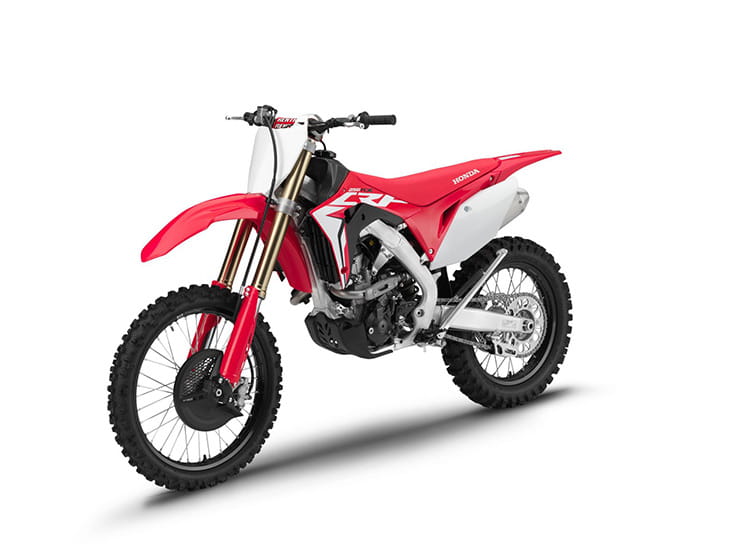 The CRF450L isnt’t the only news in Honda’s 2019 off-road range. The firm is also claiming improved performance for the CRF450R, which gets an extra 1.8kW and 2Nm more torque than before. That comes from a revised cylinder head, intake and exhaust. Honda’s also added a new 3-level launch control, while the chassis is tweaked with new suspension settings and a revised brake caliper design.

Dropping to the 250cc machines, Honda has boosted torque on the CRF250R with a smaller throttle body and changes to the camshaft, intake and exhaust. Again, it gets the new launch control.

A new CRF250RX has also been added to the range. Following in the footsteps of the CRF450RX, it’s based on the CRF250R but gets a larger 8.5l fuel tank and softer suspension to make it a more general off-road machine instead of a hard-core race bike