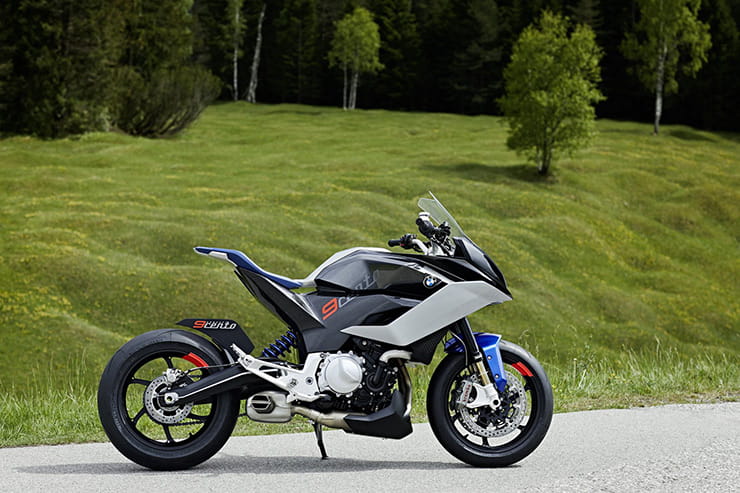 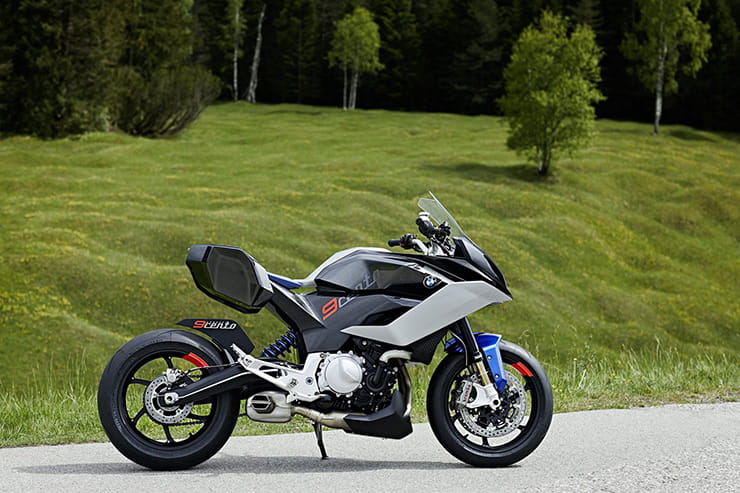 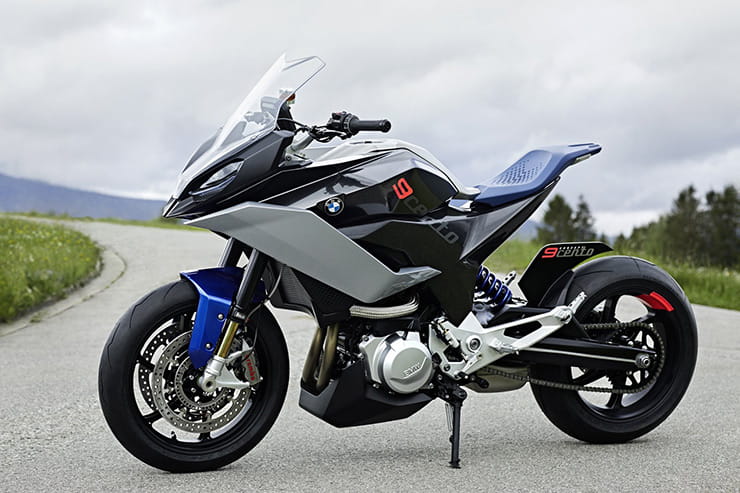 BMW has a tradition of showing concept bikes at the annual Concorso d’Eleganza Villa d’Este near lake Como in Italy. And those concepts are almost inevitably swiftly followed by production bikes sharing the same style.

So while the new Concept 9cento is officially a design exercise at the moment we’d be surprised if you can’t buy a bike that looks very much like it in a few months’ time. Given its distinctive styling, it’s a safe bet that it will be a baby F900XR, following the huge sales success of the superbike-derived S1000XR.

BMW says that we’re supposed to pronounce the name in its Italian form, so it’s ‘nove cento’. That’s ‘nine hundred’, of course; a reference to the bike’s engine.

In fact, the engine is lifted straight from the new F850GS, which means it’s an 853cc parallel twin. However, we already know that BMW’s numbering system is only vaguely related to engine size. After all, the F750GS and F850GS both use the same 853cc motor, simply retuned to give less power in ‘750’ form. The implication is that BMW has found some more power from the motor for the Concept 9cento – enough to warrant the ‘900’ designation – but that might not actually mean it’s increased the cubic capacity. 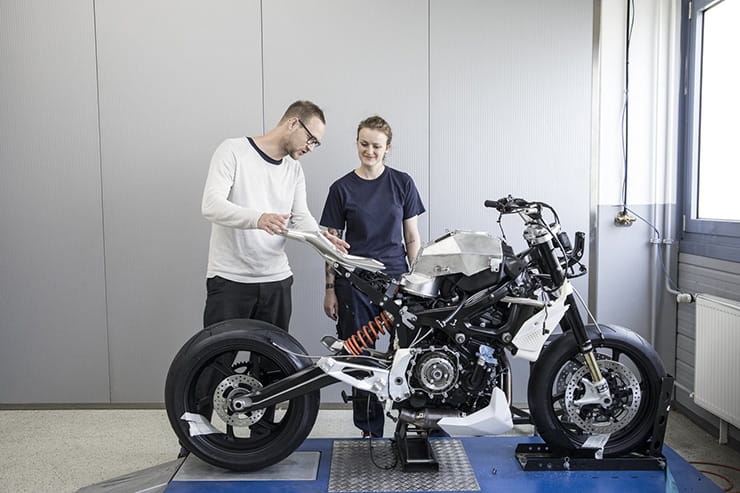 It’s not just the engine that’s been lifted from the F850GS. The frame – as seen in this picture of the concept being built – is also borrowed.

At least, the front section is. The black part might look like it’s a cast alloy design, but in fact it’s pressed steel to keep costs down. The bright aluminium part at the swingarm pivot is new, though, as are the footrest sections.

The swingarm is again lifted from the F850GS parts bin, as are the bars and triple clamps. However, the forks are rather more exotic Ohlins upside-downers, as befits an attention-grabbing concept bike. A new subframe and fuel tank are also visible in the strip-down picture.

Cleverly, BMW actually uses the carbon-fibre centre section of the bodywork as an additional structural part, bracing the seat subframe and the front section of the chassis for additional rigidity. Whether that idea carries across to the production remains to be seen. 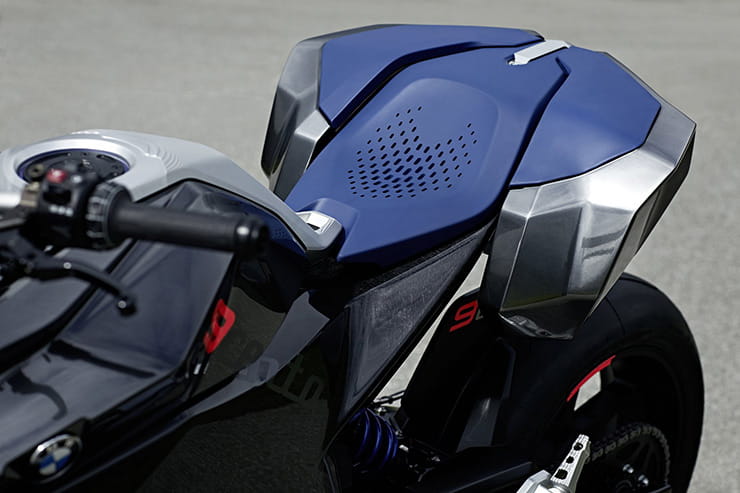 BMW makes much of the Concept 9cento’s rear end design, but the chances are that it’s the element that’s least likely to be ported straight across to the production version.

In its basic form, the tail is incredibly short and slim. Anyone daring to accept a pillion ride would surely need to have that tiny seat surgically removed from their nether regions after a few miles. To counter that problem, BMW has incorporated additional padded sections into the top of the single-piece pannier unit that attaches – apparently using electromagnets – to the underside of the tail. It’s a nice idea, but in reality we’d expect to see a much bulker rear-end on the production F900XR. Not only will it need a beefier subframe, but real-world owners (or their partners) will surely demand a bit more passenger accommodation.

Then, of course, there are those niggling realities that come with production machines. In Europe, for instance, legislation inexplicably demands that bodywork must extend beyond the rear edge of the back tyre. While many firms use an extended licence plate bracket to achieve that goal, doing the same to the Concept 9cento would require a bracket at least a couple of feet long.

In reality, the chances are that BMW will bulk up the tail as and when the production version of the bike breaks cover. 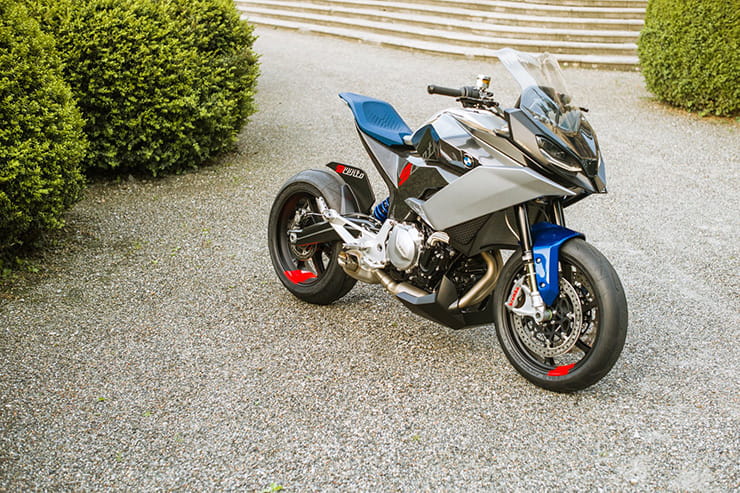 So the back is likely to change before we see the production bike. The front? Less so.

The dual headlights, tall screen and vestigial beak are all elements that already mark out the S1000XR, allied to the tippy-toe-tall suspension that gives it an adventure-bike-style stance. As anyone who’s ridden an adventure bike knows, that height provides a real-world advantage, even if you never venture off the asphalt. The improved view it offers makes it much easier to plan ahead and time your overtaking manoeuvres so you’re not constantly accelerating and braking.

Add the benefits of wide bars that give plenty of leverage and a tall screen to keep the worst of the elements away and it’s easy to see the appeal. And by combining all that with sticky rubber and sporty suspension, BMW’s ‘XR’ formula creates a bike that offers all those advantages to riders who don’t want to make the compromises involved in taking on an adventure bike with off-road ability.

BMW design boss Edgar Heinrich said: “It doesn't always have to be about ‘bolder, bigger, brighter’ nowadays: this concept bike focuses on achieving a sense of balance.

“We've created a bike that combines the appropriate power with reliable sports touring properties and above all lots of riding fun, so it's an attractive overall package. It brings together the best of the sports, adventure and touring segments to produce an exciting concept – in a class which has not seen this kind of model from BMW before. The BMW Motorrad Concept 9cento is our interpretation of a modern all-rounder for the new midrange segment.

“Functional properties such as touring capability, storage space and wind/weather protection are relevant to most motorcyclists but they're rarely included in the design of a concept vehicle. In this year's concept bike we're demonstrating that all these rational aspects can be coupled with a dynamic design to create something really exciting and highly emotional.” 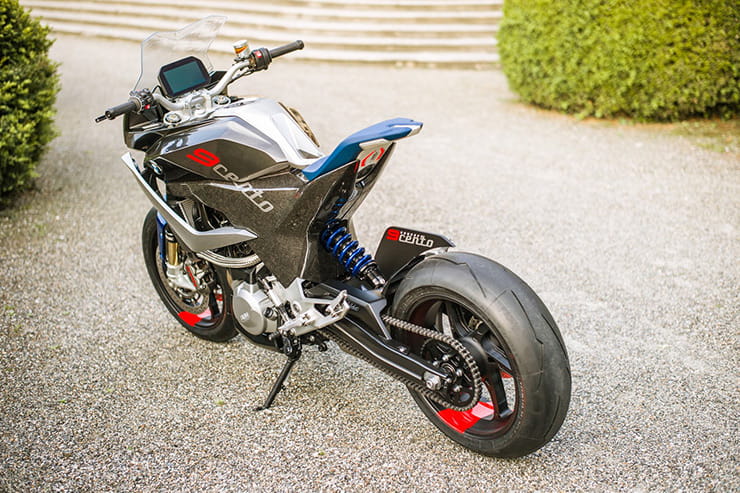 Just how strong are the production chances of the Concept 9cento?

BMW’s history with Villa d’Este concepts says that it’s pretty much 100%. In fact, all but one of the concepts BMW has shown at the event have either reached production or are set to do so.

Come 2016, BMW dropped its tradition of showing a ‘Concept’ (with a capital C) model. Instead it showed the R5 Hommage, which was based on a real 1936 R5, with a supercharger added, and isn’t expected to lead to production. It seems the production follow-up only applies to ‘Concept’ machines shown at Villa d’Este.

Last year it was the turn of the Concept Link electric scooter, which hasn’t hit showrooms yet but surely gave a preview to a next-generation C Evolution electric bike.

With a track record like that, and such a clearly production-based design, it’s unimaginable that BMW won’t have a showroom version of the Concept 9cento ready to roll in the very near future. Even in time for the 2019 model range? Don’t bet against it.