A bike gang from Burnley who robbed cash in transit from delivery drivers across the North West of England – before laundering the money in betting shops – has been sentenced to 124 years imprisonment.

The Organised Crime Group of Greater Manchester police set up Operation Speedway to catch the 17-strong gang of criminals, who committed 10 robberies in the Lancashire area between August 2016 and June 2017.

Members of the gang – usually working in pairs on a stolen motorcycle and often armed with machetes – would approach cash-in-transit officers at speed while they were replenishing ATMs at banks and shops. After making threats, offenders would leave with thousands of pounds in cash.

Dario Eastcroft was the kingpin of the OCG and had a pivotal organisational role within the conspiracy, monitoring all the gangs’ communications and carrying out any surveillance necessary.

The other defendants were drafted in as and when they were needed, then Eastcroft would then watch the gang carry out the robberies at the targeted premises from a location nearby.

To launder the stolen money often dye-stained by security devices exploding during the course of the robbery, members of the conspiracy visited a total of 47 betting shops across the North West.

There they would use fixed-odds betting machines to deposit the stolen cash before using credit slips to obtain clean bank notes.

Another gang member – Cameron Yearwood – began filling in an online account application because the cashier had insufficient cash to pay-out in full.

He put co-conspirator Noel Devers’ phone number on the application but abandoned it part-finished. When Yearwood returned the following day in an attempt to cash the betting slip, staff realised what was happening and stalled him.

Devers left empty handed and the betting slip, which was retained by staff, was found to have Dario Eastcroft’s finger prints on it. 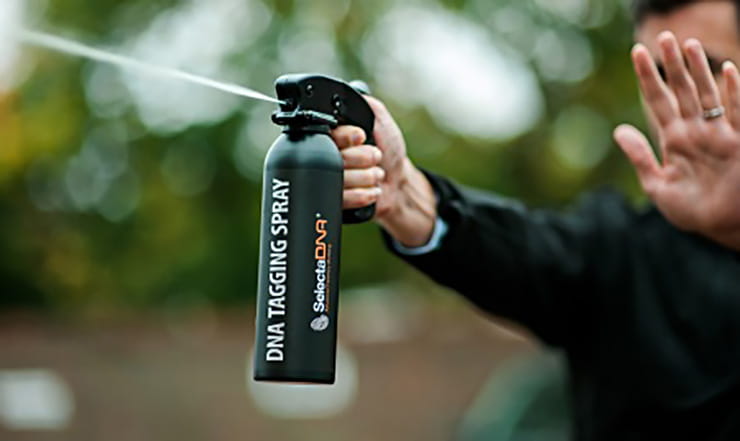 The Met’s latest incident to involve the new DNA spray started on 29th April, when a delivery driver's locked scooter was stolen while he was making a delivery on Maitland Park Road, Camden. On 1st May, two males were seen by officers riding a stolen scooter at speed on Pond Street, Camden. The scooter failed to stop for officers before riding across Fleet Street junction.

Officers coordinated air support, ground units and dog units to search and contain the suspects. The scooter was then seen to mount the footpath and continue towards Cressy Road, Camden, at which point officers sprayed DNA tagging spray at the two males and used a tyre deflation device on their vehicle, causing it to come to a stop.

The two males then made off on foot, abandoning the scooter in the road. Suspect A was immediately detained and Suspect B was found half-an-hour later, hiding in a garden shed in Camden.

The 17-year old youths were arrested for aggravated taking and driving away, dangerous driving and driving with no insurance. They were both found to have traces of DNA tagging spray on them, which indisputably linked them to the stolen bike and the related offences. They were further arrested (while in custody) on suspicion of theft of a scooter. Both males remain in custody at a north London police station.

Commander Julian Bennett said: “Police are working hard to keep the public safe and make the streets hostile territory for criminals who steal scooters, mopeds, motorbikes and bicycles and then use them for other offences.

“Our message is simple – if you commit a scooter-related crime, you will be found and arrested. We are using every tactic available to us to bring offenders to justice.”

DNA Tagging Spray is used to deter and prevent personal attack and criminal behaviour, such as moped and motorcycle enabled crimes. It can be aimed by officers at suspected illegal and anti-social scrambler bikes, as well as at mopeds and motorbikes involved in other crimes such as robberies, assaults and smash and grab raids. The DNA tagging spray marks the bikes, clothing and skin of any riders and passengers with a uniquely-coded but invisible DNA that will provide forensic evidence to link them to a specific crime. 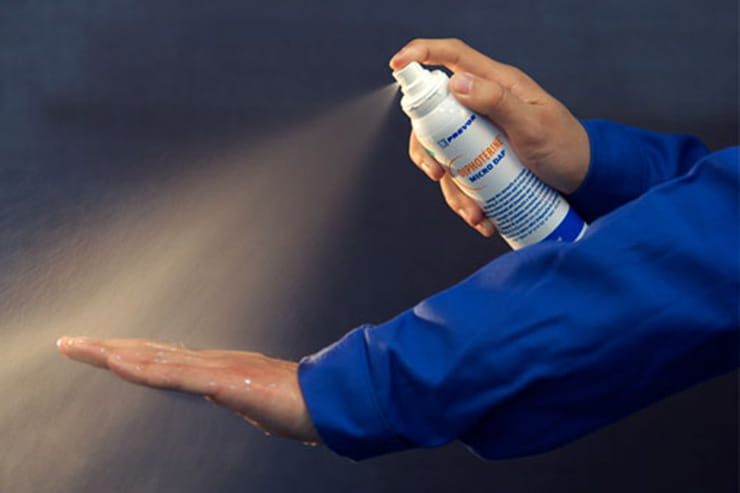 With the amount of acid attacks happening in London, motorcyclists and scooter riders are now including in their ‘must have’ kit a spray containing liquids effective against many kinds of corrosive and irritant chemical attacks. These can help to rapidly and effectively absorb and neutralise most aggressive chemicals and hopefully prevent any possible reactions that might ensue. One such spray is an aqueous, polyvalent, washing solution called Diphoterine.

It’s advised however that whatever anti acid-attack solution is chosen, its important to check with a doctor or chemist first. Whatever it is it must remove the chemical from the surface of the skin and absorb and neutralise the aggressive chemical molecules that are attempting to penetrate the tissue.

In the event of an attack, the first course of action after calling an ambulance should be to ensure the casualty is still breathing and responsive, and to douse the affected area with water for 20 minutes, while gently trying to remove it from any clothing. If it’s gone into their eyes keep pouring water in them for at least 10 minutes. If the chemical is in powder form, it needs to be brushed off quickly. 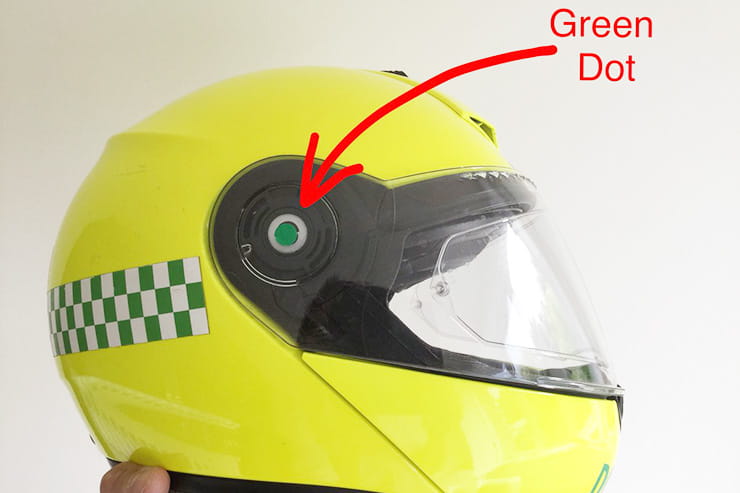 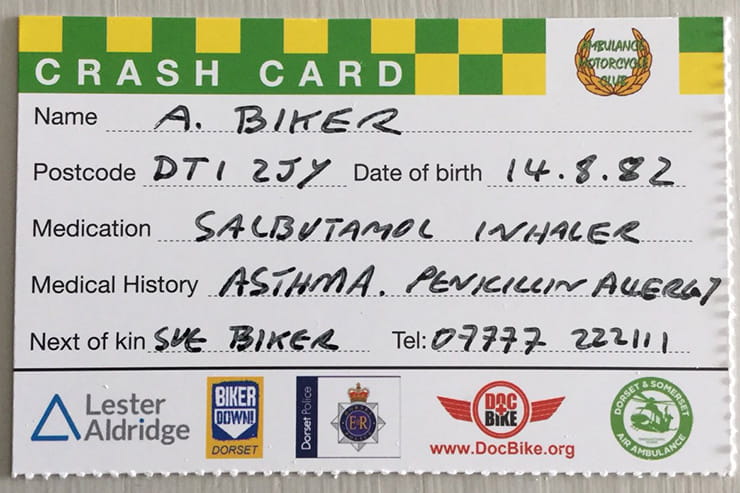 A small green dot stuck onto the crash helmet indicates that on the inside of the lid is a 'Crash' card containing written details about an injured rider’s medication and medical history (if any), and their next of kin. This is all vital information for attending ambulance crews that could save valuable time in helping an injured rider who is either unconscious or unable to communicate.