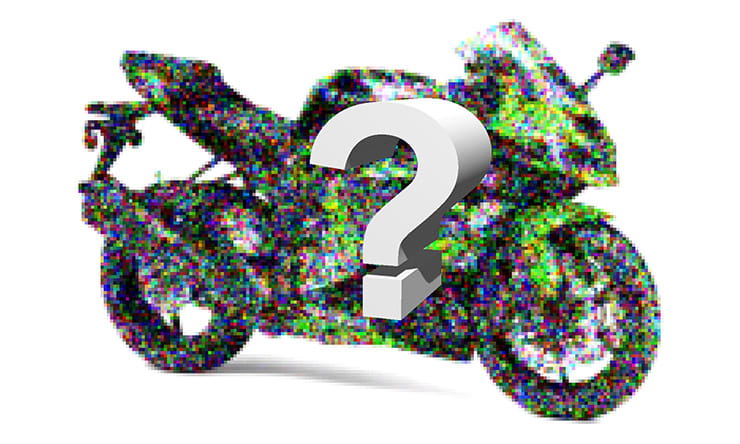 The 600cc supersports class might be a shadow of its former glory in terms of sales but Kawasaki is set to reveal a revamped ZX-6R later this year.

With sales declining worldwide, the onset of strict Euro4 emissions rules looked set to be the death knell of the 600cc supersport category. They prompted Honda to discontinue the CBR600RR, since the firm decided it wasn’t economically viable to develop a Euro4-compliant replacement. It was followed by Triumph, which ditched the Daytona 675 rather than making an emissions-legal version for Euro4 rules.

Recently Kawasaki, too, has quietly let the ZX-6R slip out of its model range in Europe, although the bike remains on sale in America and Japan, and Suzuki’s GSX-R600 and GSX-R750 models have also disappeared from the price lists.

The Euro4 limits came into force at the start of 2017 but of all the main 600-class contenders only Yamaha made the investment in creating a Euro4-legal machine in time for the rule change.

Despite the January 2017 deadline, manufacturers were given permission to sell small numbers of non-Euro4 machines for up to two years, until December 31 2018. Kawasaki was initially among those to take advantage of this, along with Suzuki, Triumph and MV Agusta. But while MV has since revealed an updated, Euro4-legal version of the F3 675, the rest have dropped their supersport-class contenders – at least in Europe.

That means the European supersport class in mid-2018 contains only two Euro4-legal models – the Yamaha YZF-R6 and MV Agusta F3. But it looks like there will be more soon.

The clue to the bike’s existence comes from America, where the company still sells the old model. Now it’s filed documents with the California Air Resources Board (CARB) for a 2019 version of the 636cc ZX-6R.

And the key change? Improved emissions performance; the 2019 model is far cleaner than the 2018 version, which means it will hit those elusive Euro4 targets to allow it to be sold over here. 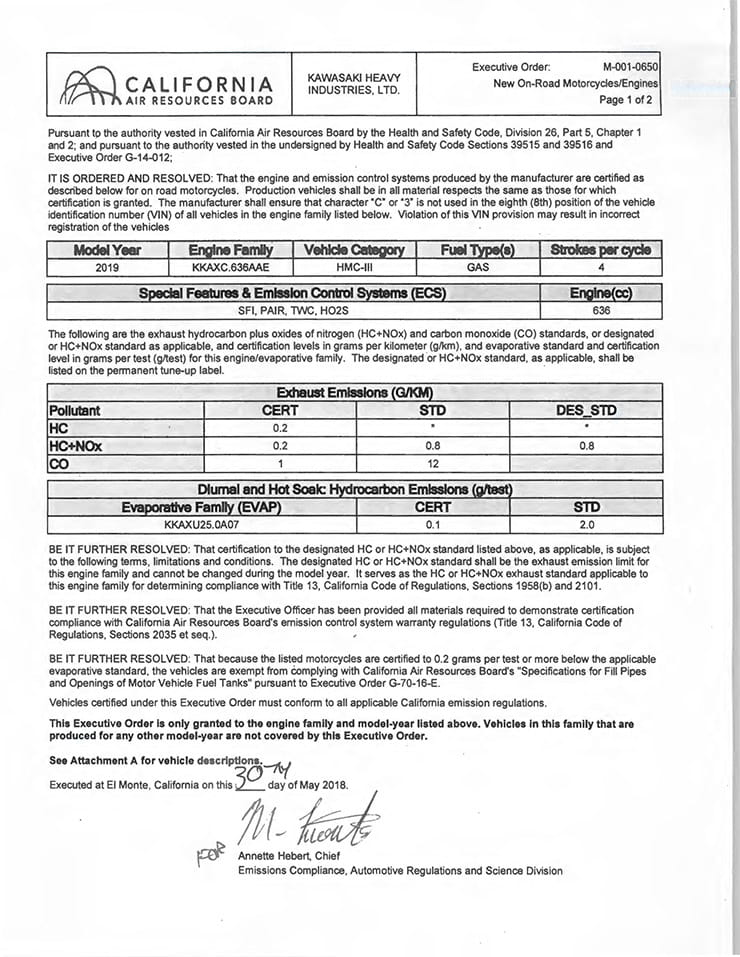 According to the new CARB certificate, the 2019 ZX-6R will retain a 636cc engine of the same basic design as the old model, but with a three-way catalytic converter instead of the old bike’s two-way (or ‘oxidation’) cat. That means as well as converting carbon monoxide to carbon dioxide and hydrocarbons to carbon dioxide and water – the two operations of a two-way cat – it can convert oxides of nitrogen (NOx) into nitrogen.

The result is that under the American testing system, the 2019 ZX-6R achieves a combined hydrocarbons and NOx level of 0.2g/km. In comparison, the 2018 version’s figure was twice as high, at 0.4g/km.

Meanwhile, emissions of hydrocarbons alone have dropped from 0.3g/km to 0.2g/km and carbon monoxide levels drop from 2g/km to 1g/km.

The CARB documents tell us is that as well as the three-way cat, the 2019 ZX-6R gains a heated oxygen sensor in its exhaust. That’s no real surprise, as three-way catalysts require a ‘closed loop’ system, where the oxygen levels in the exhaust are constantly monitored and the injection map adjusted to suit.

They also give an ‘equivalent inertial mass’ figure – a fairly vague guesstimate at the bike’s real-world weight including an average rider – of 310kg. That figure doesn’t mean a lot, except that it’s the same as the number given for the old 2018 version of the ZX-6R, so the new model is neither gaining nor losing a lot of weight.

Given the fact that the 2019 bike’s engine is a development of the previous model’s, and that sales in the 600cc supersport class are low, it’s a safe bet that Kawasaki’s modifications to the rest of the ZX-6R will be along the lines of those made by Yamaha to the YZF-R6 in 2017.

In other words, it might get a new look – perhaps radically so – but the majority of the underlying components will be changed as little as possible to keep R&D costs to a minimum. We’d expect to see the same chassis as the old bike, with perhaps a few minor tweaks to the suspension and brakes, but a heavily updated style to make sure customers know that this is a new model.

While there’s little indication that sales in the 600cc class are likely to pick up soon, at least the news of the new ZX-6R means there will be options for those buyers remaining loyal to the category or looking for a sporty stepping-stone towards a 1000cc superbike.

It means that in 2019 your options will include at least two Japanese bikes – the R6 and ZX-6R – as well as the MV Agusta F3. It’s also a near-certainty that Suzuki is working on Euro4-legal versions of GSX-R750 and 600, although we’ve yet to see the same sort of documentary confirmation that the CARB certificates give to the existence of the 2019 ZX-6.

Will Triumph also join the fun with a 765cc Daytona derived from the new Street Triple? It would certainly make a neat tie-in with the company’s 2019 Moto2 engine supply deal, although there’s been no sign of such a bike on test and no paper-trail to prove it’s anything more than a pipe-dream.