No time to trawl the internet and catch up with the last seven days’ worth of biking news? Never fear: here’s BikeSocial’s round-up of stories that might have passed you by. 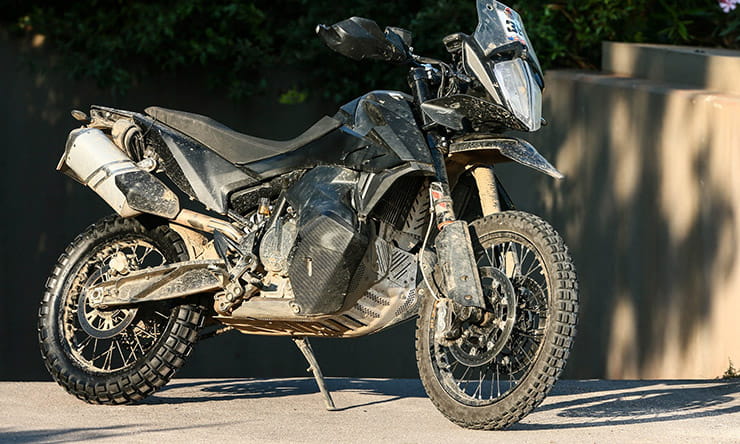 KTM hasn’t made any attempt to keep its planned 790 Adventure R model a secret, having shown a concept version last November and making little effort to avoid the lenses of spy photographers with its prototypes. But the firm has now come clean about the machine by showing a final-stage prototype to fans at the exclusive European Adventure Rally.

While we already knew the bike was powered by the same RC8c, 799cc parallel twin that debuted in the 790 Duke, KTM has now revealed that the engine is retuned for a wider spread of torque. It also said that the Adventure’s unusual low-mounted fuel tanks will give it a range in excess of 400km, while allowing for a low centre of gravity.

Unusually for this style of machine, the 790 Adventure R has a relatively low seat and ‘adjustable ergonomics’ to suit different riders and situations.

The bike was ridden at the three-day event by eight-time New Zealand enduro champion Chris Birch, who said:

“I’m honestly blown away by the new KTM 790 ADVENRTURE R. Naturally, I’ve got a lot of experience on enduro bikes and the awesome ability of the big KTM ADVENTURE models, and this just feels like the perfect combination of them both. Obviously, what I rode is still a prototype, but it´s looking in terrific shape. Can’t wait to ride the final product!” 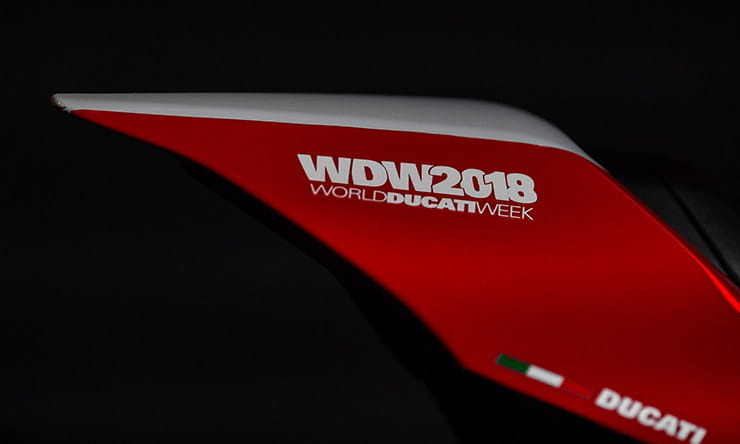 Ducati will give visitors to next month’s World Ducati Week a sneak preview of a still-secret 2019 model.

The so-called ‘closed room’ preview, which will feature a prototype in a sealed area where cameras are banned, is something the firm has done before, first revealing both the Scrambler and the Supersport in this manner. But at the moment it’s not known what model will be hiding in that room.

Given past experience, it seems virtually certain that someone will manage to sneak a camera in, though – it’s happened every other time this has been tried. So expect to see news of the bike leaking out when WDW takes place at Misano on 20-22 July.

Ducati said: The public of the WDW2018 will have the chance to enter an exclusive “closed room” where they can admire a new Ducati motorcycle representing a preview of the Model Year 2019 which will be unveiled to the public during EICMA2018.

What bike will it be? Perhaps the most likely preview candidate is the uber-exotic Paniagle V4 R. This will be a sub-1000cc version of the V4 superbike (currently 1103cc), with a host of race-ready elements designed to be homologated for its debut in the WSBK series in 2019. 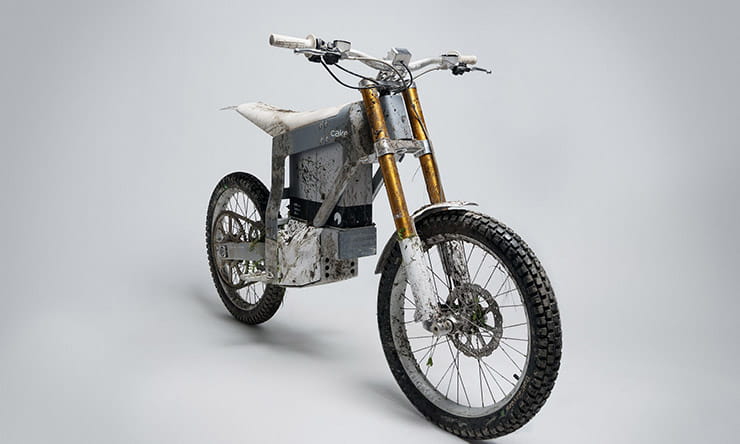 Electric bikes might still be struggling to break through into the mainstream but the number of small start-ups entering the arena is constantly growing. And Sweden’s CAKE is one of the more intriguing ones.

Rather than aiming at the conventional bike market, it’s new Kalk model – which was revealed some time ago but is now available to order with deliveries due in early 2019 – is an off-road-only bike that straddles the space between mountain bike and motocrosser.

Not aimed at competition, its intended for fun and for enjoying the wild outdoors.

“When I first started riding electric off-road bikes a few years back, I was caught by the qualities and aspects of exploring the backcountry quietly and without pollution. I have been on a mission ever since,” says Stefan Ytterborn, founder and CEO of CAKE. ”With a clear mission to contribute speeding up the transition towards a zero emission society, CAKE aims to turn the motorized two-wheeled future upside down.”

“It’s somewhat unreal being at this stage,” continues Ytterborn. “The highly competent and committed people on our team have worked hard to define this new category, demonstrating what light, clean, and quiet electric performance off-road bikes can be. To see the response we’ve gotten so far, and to have the Production series available for pre-order is an amazing feeling.”

The Kalk weighs only 69kg including its 16kg li-ion battery, has a top speed of over 46mph and makes 20hp. But its price - €13,000 – means it’s still one for dedicated early-adopters at the moment. 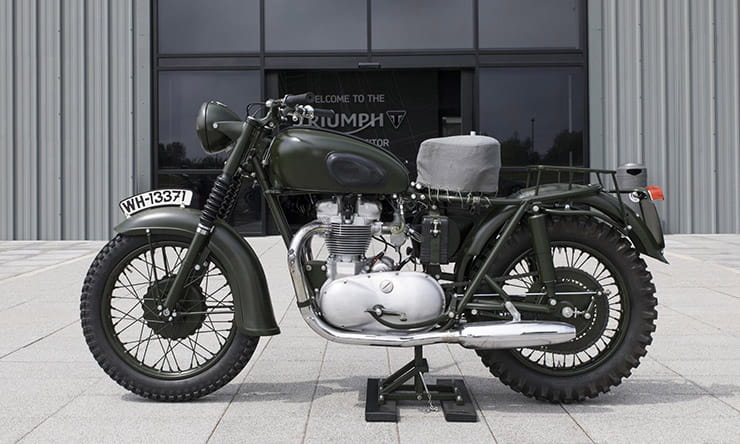 The world’s least-convincing WW2-era BMW – the 1962 Triumph TR6R used by Steve McQueen in The Great Escape – is to star at the Salon Privé concours d’elegance at Blenheim Palace.

An accomplished amateur racer on 2- and 4 -wheels, McQueen begged the film’s director John Sturges to let him perform the famous stunt which saw his character Virgil Hilts attempt to flee his pursuers by jumping across barricades and barbed wire from Germany into neutral Switzerland.

The film’s insurers wouldn’t allow it, so the task fell to the King of Cool’s great friend and sometime team-mate Bud Ekins instead. World War 2-era machine would not have been up to the task, so as many as three TR6Rs were aged to look the part and used for the rough stuff. The stunt entered into legend in an instant and helped cement the film’s legendary status.

The McQueen Triumph will be competing in Class B, with judging taking place on August 30. It will be on general display on Friday, August 31. 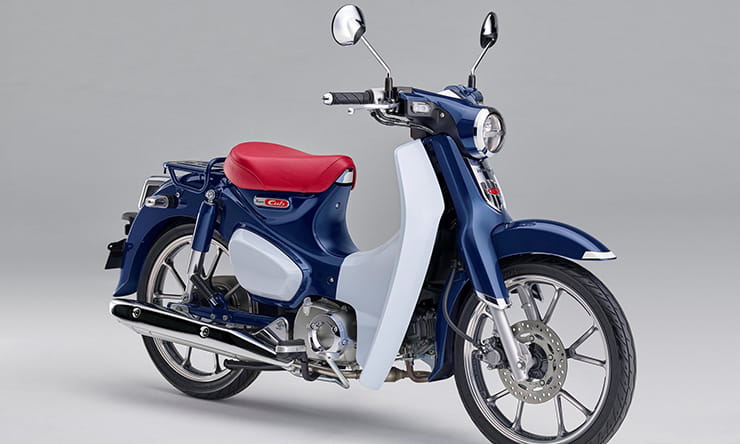 Ever since Honda showed its Super Cub C125 as a concept at the Tokyo Motor Show last year there’s been little doubt that the fuel-injected, emissions-friendly machine would be making a return to the European market for the first time in years, just like the Monkey 125 that was revealed alongside it. Now Honda has confirmed exactly that.

The 125cc capacity makes the latest Super Cub a perfect fit for European learner laws, and carries on the classic style of the Cub that was first introduced 60 years ago in 1958. Not that it actually shares any parts with that original machine; this is a brand-new take on the idea.

Unlike normal twist-and-go scooters, which use seamless continuously variable transmissions, the Super Cub sticks to its tradition of combining an automatic, centrifugal clutch with a foot-operated four-speed gearbox. And in classic Cub style, it’s insanely fuel-efficient, with an official rating of 188.4 miles per gallon, giving a 152 mile range from a tiny 3.7 litre tank.

Engine wise, it uses an air-cooled, two-valve 125cc single making 9.5hp. Simple stuff, but at least it has an electric start, and you even get LED lighting front and rear and a ‘Honda Smart Key’ keyless ignition system.

But the real feature of the Super Cub is the style statement it makes. It’s a modern representation of the single most popular motor vehicle ever made, and as such has a classless appeal that few other learner-legal machines or scooters – other than the Vespa, perhaps – can hope to match.

“We know our customers, male or female, take their personal style seriously and we want our new Super Cub C125 to enrich their lifestyle. Its timeless design expresses value and universality, and we have added a new level of performance to the engine and handling ability to the chassis. Just like it was for our founder, our biggest joy is to play a positive part in daily life – and also put a big smile on the face of every Super Cub owner whenever and wherever they ride it.”