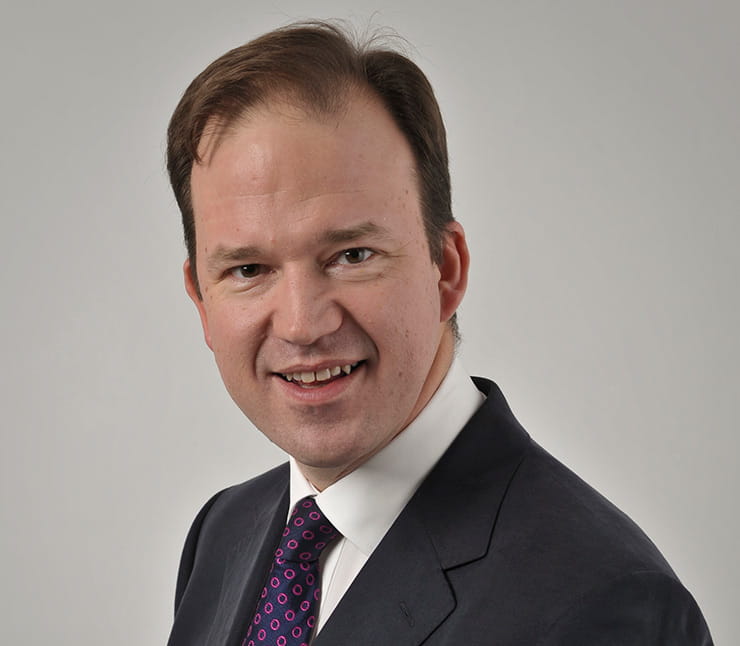 Roads Minister Jesse Norman says that he’s instructed the Department for Transport to draw up a new road safety action plan and that motorcyclists will be one of four road user groups it will specifically focus on.

He revealed the plan while publishing a progress report on the delivery of actions from the 2015 Road Safety Statement.

It came shortly after the announcement of two other major road safety initiatives. The first was a £350,000 ‘innovation competition’ intended to encourage the development and delivery of a new evidence-quality roadside breathalyser. The Government wants police across the country to be equipped with such devices by summer 2020. Current mobile breathalysers aren’t accurate enough to secure convictions, so suspects need to take a second test at a police station, leading to delays that give them extra time to sober up.

The second initiative is a £480,000 pilot scheme that will see the RAC Foundation and police team up to trial in-depth investigations of road crashes. These investigations, inspired by the types done by the Air Accident Investigation Branch, should give better insight into the causes of certain types of crash.

Jesse Norman said: “This package of measures underlines the government’s recognition of the importance of road safety. But, thirdly, we intend to go further still, and I have asked the department to develop a refreshed road safety statement and a 2 year action plan to address 4 priority user groups - young people, rural road users, motorcyclists and older vulnerable users. The first 3 of these groups are continually over-represented in our road casualty statistics, while we have data to confirm that the safety of older road users is a growing concern. Our goal is for everyone to continue to enjoy the mobility that driving offers, but to do so safely. The development of this refreshed road safety statement will also take account of the early lessons from the new road collision investigation pilots.”

We say: Any initiative to identify the causes of motorcycle crashes and try to reduce them is essentially a good idea. However, there’s inevitably going to be a level of concern when it comes to the plans drawn up as a result. Anything making bike licences even harder to get or adding to the expense or inconvenience of riding could harm motorcycling’s popularity; reducing the number of bikes on the road would no doubt lead to lower accident figures, but it’s not the right solution. 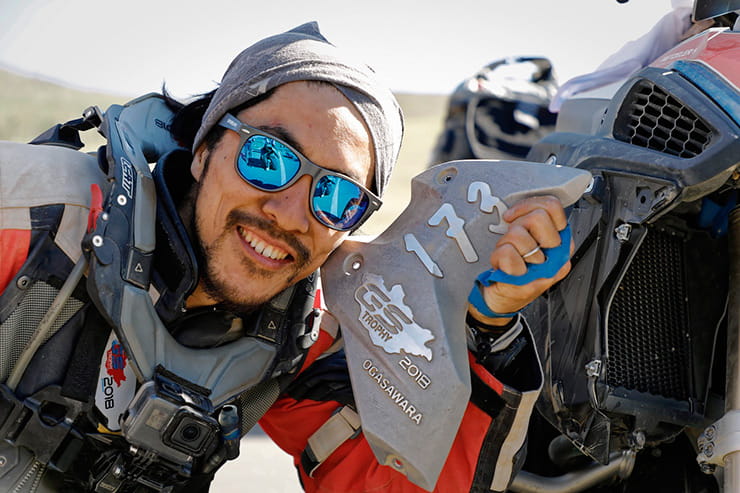 We’ve already explored the potential for 3D printing when it comes to making motorcycle parts and now BMW has once again demonstrated its potential.

The firm has created unique, individualised radiator covers for each of the 114 competitors in the 2018 International GS Trophy, and it’s surely a clue as to the sort of personalised accessories that will soon be available to normal riders as well.

Experts of the BMW Group Additive Manufacturing Centre have teamed up with BMW Motorrad to individualize the bikes of the Int. GS Trophy 2018. A generative design algorithm was used to individualize the radiator covers of the 114 BMW R 1200 GS Rallye bikes: the rider’s names and start numbers were added to the existing CAD data of the part. Subsequently, the radiator covers were printed by using additive manufacturing.

In the selective laser melting process aluminium powder is fused by powerful lasers. As no tools are required, every produced component can be different, thus making it the perfect choice for individualization. At the same time, the resulting parts are of a very high strength – perfect for rough conditions like the Int. GS Trophy which took place in Mongolia from June 3 till June 10 2018. An additional milling process was used to create greater contrast and surface quality of the design.

As a souvenir from the 2,350 km journey, the individualized radiator covers were handed over to the participants at the awards ceremony. 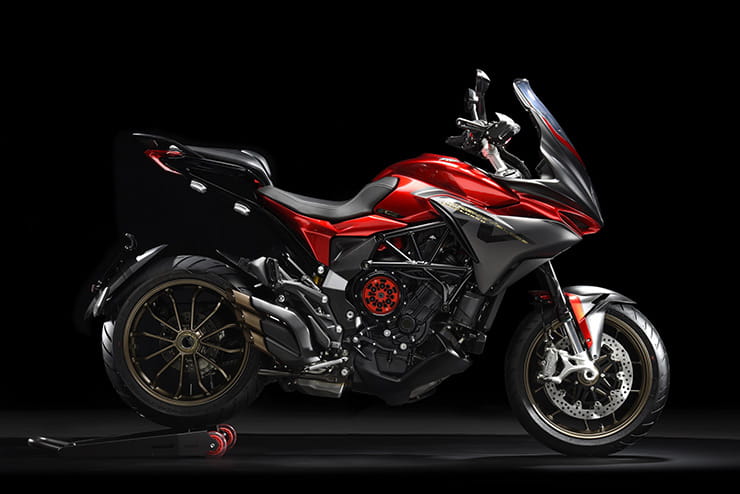 It’s been nearly a decade since Honda introduced its double-clutch transmission and even longer since Yamaha brought a semi-auto box to its FJR1300. And yet the idea of doing without a normal clutch still feels alien to most of us.

Which is perhaps why MV Agusta’s new Turismo Veloce 800 Lusso SCS has sparked such interest; it offers the option of an automated clutch that doesn’t do away with any of the familiar controls that we’re used to.

MV’s semi-auto actually comes from combining its existing up-and-down quickshift with a centrifugal clutch from US firm Rekluse. The Rekluse clutch, originally developed for motocross use, is a straight replacement for a normal multi-plate clutch. A specially designed disc inside the clutch incorporates weighted wedges that are forced outwards when revs rise. They make the disc expand, engaging the clutch automatically as the hits a pre-determined engine speed. However, since there’s still a normal mechanism as well, you can still pull the lever in to disengage it whenever you want. And we’ve ridden it!

The research, testing and engineering took two years of work, in the hands of a dedicated team.

The initial objectives were ambitious. Improve comfort and riding fluidity, whilst enhancing the level of performance and sportiness that people expect from every MV Agusta model. At the start of the project, we analysed the solutions already available on the market. On the one hand, there are CVT type systems with their continuous gear variation, considered suitable for scooters but in no way good enough for a sports model like the Turismo Veloce. On the other hand, double clutch systems that are effective, but complex, very heavy and excessively bulky. These characteristics are completely at odds with the design choices underpinning our 800cc three-cylinder engine, engineered to be compact and light-weight, and part of a vehicle designed to be as light as possible.

The Smart Clutch System offers the rider two choices: to use the clutch in the traditional way by operating the lever on the handlebars (yes, it's still there!), or hand over complete control of the clutch to the system so that the rider can concentrate on the road and fully enjoy the ride.

This automatic system takes nothing away and ensures maximum freedom of choice. MV Agusta technology requires perfect integration of the mechanical, hydraulic and electronic components. Ensuring perfect engine control is crucial in order to have a better integrated and more efficient automatic clutch system. As mentioned, the clutch lever can be used at any time, without limitation.

The automatic clutch system actually operates in parallel and so there is no need for any prior selection when switching from manual to automatic operation.

READ our full review of the bike here 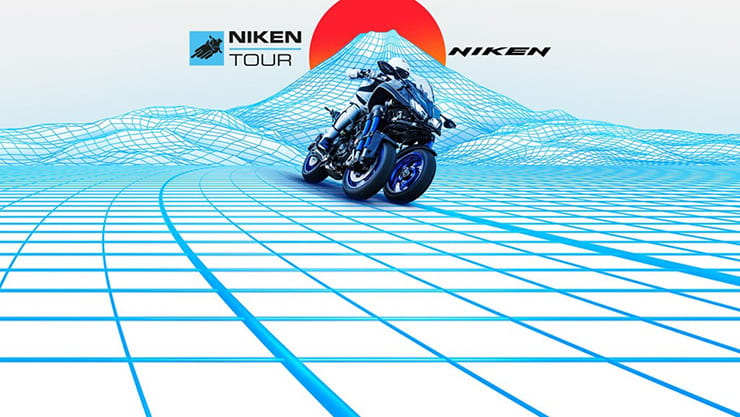 Yamaha’s Niken 3-wheeler remains without doubt the most interesting new bike of 2018 even we reckon it needs to be repositioned as a sports-tourer to make the most of its technology.

But while we’re lucky enough to have ridden one, Yamaha’s online sales system means there’s no simply getting a demo bike from your local dealer if you want to experience it for yourself. So Yamaha is taking the bikes on a tour around Europe, allowing potential customers to have a go for themselves.

The time has come for NIKEN to get out into the world and start making headlines. Featuring Yamaha's unique Leaning Multi Wheel (LMW) technology, the NIKEN rides and feels like nothing else on the road. The NIKEN Demo Tour is the first chance the public will have to Ride the Revolution.

The Yamaha LMW technology project was first unveiled at the 2013 Tokyo Motor Show and it immediately drew a big reaction. NIKEN's unique design provides the rider with unparalleled control over their riding experience. The extra stability that the innovative chassis creates means that anyone can conquer the road and gives the NIKEN rider what many consider to be the most thrilling motorcycle experience in the world. Couple this revolution in design with a specially tuned Yamaha 847cc CP3 engine and you have a machine that is not only incredibly responsive and tuned to maximise rider performance, but powerful as well.

Expertly designed to find the perfect line, the NIKEN was built for winding roads and tight turns. That's why the NIKEN Demo Tour is going to be travelling Europe and finding the most appropriate locations to show off what makes this machine so unique. From conquering mountains to carving through valleys, this tour will put everything the NIKEN can do on display.

More details, including how to book a test ride, will be announced at the tour’s website here: https://www.yamaha-motor.eu 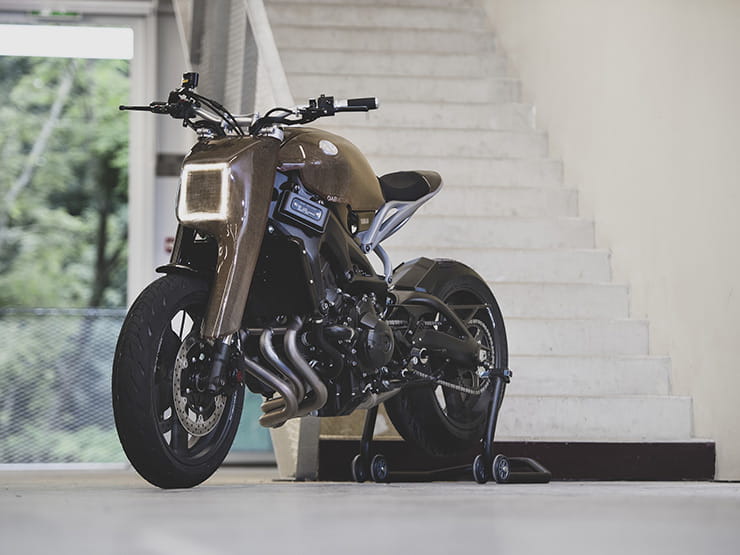 Yamaha has been getting external custom builders to create ‘Yard-Built’ versions of its machines for years now but the latest one seems to stretch the concept beyond breaking point.

The original idea of the Yard-Built campaign was to demonstrate what buyers of Yamaha’s bikes might be able to achieve with a few modifications of their own. As in, they could build one in their yard. That’s not the case with The Alter, built by Biarritz-based Dab Motors.

It’s got a 3D printed aluminium subframe, ‘sustainable flax bodywork fresh out of the lab’ and even Yamaha’s own Product Manager, Antoine Clémot, describes it as ‘something out of a science fiction film.’

Good luck making that in your garage at home.

Dab Motors felt an affinity with the XSR900 from the start with its mix of modern and retro design, and innovative lines. They knew the lightweight body, packed with character, and sporty engine would be more than a match for their futuristic concept. From the very moment that Dab Motors got their hands on the Sports Heritage machine, a powerhouse of customisation, they put their knowledge of technology into top gear. Using 3D modelling, and advanced rendering techniques, they designed a customised bike in an almost entirely digital world. With data built from modelling techniques and schematics created in a virtual work space, they set the robots to work on forging this mechanical marvel.

Putting to life their designs using advanced manufacturing machines, they produced high quality, ultra-durable, 3D printed aluminium sub chassis, upper triple tree, risers and headlight holders. The exhaust is a collaborative creation by Dab Motors and a trusted partner. There's brand new handlebars, grips, brake reservoirs and mirrors. The bike features ultra-light, sustainable flax fibre body work fresh out of the lab. Even the lighting system is pushing the boundaries, with a smart LED array controlled by an Arduino micro controller board. All of this is wrapped around the finest quality brakes, suspensions from industry giant Öhlins (STX 46 shock absorber and NIX 30 cartridge kit) and other parts making this a high-performance message sent back in time from the 22nd Century.