Beware of the new car and bike insurance scam 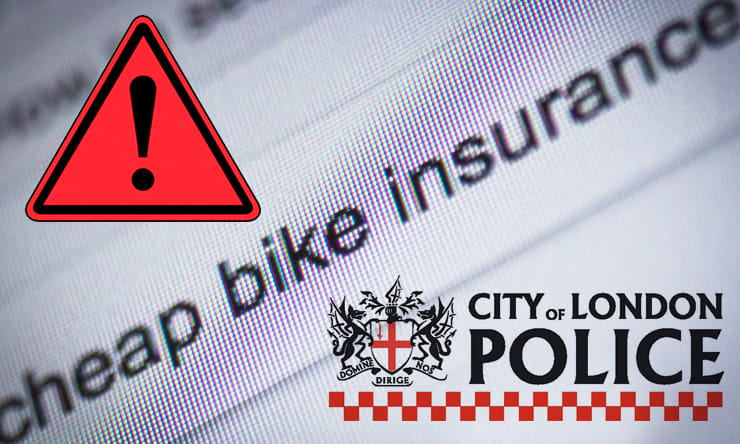 The City of London police is warning bikers and drivers to be vigilant after a new motorcycle and car insurance scam – sometimes referred to as ‘ghost broking’ has many out of pocket and uninsured.

Already at least 800 people have been found to have fake insurance policies, so the number potentially driving or riding unlawfully – unknowingly without genuine insurance – is expected to be in the thousands.

Bike and car owners are being targeted through adverts on social media, money-saving forums and student websites, with advertisements from the crooks even appearing in pubs, clubs, newsagents and repair shops.

How do these car and bike insurance scams work?

One way this crime is being carried out is with the crooks posing as brokers working for established household insurance companies and contacting potential ‘customers’ directly, who are offered an insurance quote that could potentially save them a lot of money on an annual insurance renewal. After handing over hundreds and even thousands of pounds, the ‘customers’ are issued with forged documents.

Other fraudsters take out genuine policies on the customers’ behalf, then cancel the policies and claim the refunds for themselves, as well as keeping the money from the victims. One convicted scammer was found to have set up a total of 133 fake insurance policies worth £90,000, with a further £60,000 being scammed before he was arrested.

The fake insurance policies are deemed worthless. Some unfortunate drivers and riders have only found out about the scam when they were involved in an accident and were left footing the entire bill, which often runs into many thousands of pounds.

Detective Chief Inspector Andy Fyfe of the City of London Police said: “Ghost brokers trick unsuspecting victims with offers of heavily-discounted vehicle insurance, leaving them with a policy that isn’t worth the paper it’s written on, and open to the severe harm that comes from driving without valid insurance.”

The rise of ‘ghost brokers’ has been fuelled by increases in the cost of genuine insurance premiums. Regulatory and market changes through 2017 saw the underlying cost of many underwriters’ policies increase by around 15%. In addition to this, the government has upped Insurance Premium Tax by a further 2-12%. Combined with the increasing price of claims – parts cost more due to inflation and the weakened value of the pound – many buyers have been lured by the promise of being able to slash their quotes from sometimes thousands of pounds to as little as just £100.

Ghost brokers are being targeted by the UK police in a concerted nationwide effort, but the fraudsters are still posting messages on social media and even paying for Facebook ads, with ‘cover’ offered at temptingly low rates.

Driving without valid vehicle insurance is a crime that carries a hefty penalty so Police are warning all customers looking for car or motorcycle insurance to be vigilant. People are advised to do some research into the company they’re considering, and to remember that if an offer seems too good to be true, it most often is.

To ensure your vehicle is legally insured, visit the Motor Insurance Database to perform a free check of your own vehicle: https://ownvehicle.askmid.com/