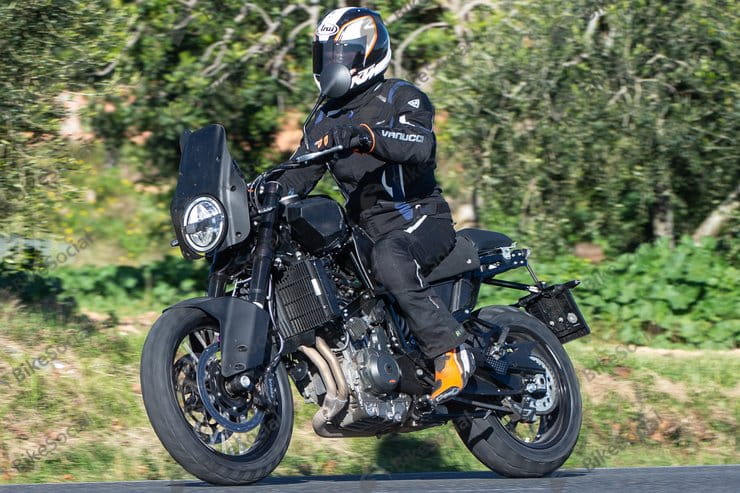 The modus operandi over at Husqvarna is pretty well established now; the firm takes existing KTM models and remoulds them with a distinctive neo-retro style to create bikes with an appeal all of their own. And that’s just what we’re seeing here in the first spy shots of a future Husqvarna parallel twin adventure bike.

Given that, since 2013, Husqvarna has been a subsidiary of KTM, the formula makes a lot of sense. KTM’s own models are strong on performance and ability but the Austrian firm steers its own path, using styling that, while distinctive, doesn’t appeal to everyone. By using the same capable mechanical parts under completely different skins, Husqvarna is growing a model range that’s reassuringly KTM-based but attracts a completely different set of customers.

It’s instantly clear that this prototype is based on KTM’s newly-launched 790 Adventure. It features the same 94bhp, 799cc ‘LC8c’ parallel twin – as also used in the KTM 790 Duke – while its chassis and suspension are also immediately familiar as 790 Adventure parts.

However, it’s not a straight case of slapping some new plastics on to create a Husqvarna version. The firm has also adapted the bike’s stance, moving away from the KTM’s seriously off-road attitude to a more asphalt-oriented style.

The wheels, for instance, are different. Although they're still wires, the front rim is smaller; probably 19in rather than 21in, and the rear appears to be 17in instead of the KTM’s 18in. That wheel change is certain to have a knock-on effect on the geometry, too, sharpening the steering, shortening the wheelbase and lowering the front of the bike.

It’s a little early to make any judgement on the Husqvarna’s styling. At the moment, there really isn’t any. The angular fuel tank looks like it’s come from the rejects bin at a sixth-form metalworking class; it’s clearly a lashed-together stopgap. Only the nose shows something that might be representative of final styling, with the same oversized circular headlight of the Svartpilen and Vitpilen 701 models but this time mounted in a near-vertical cowling that also doubles as an instrument pod. The aesthetic is very much in the same, industrial vein as the rest of the Husqvarna road bike range.

Given the bike’s early prototype state, it’s probably still quite some distance from production. Husqvarna’s usual style is to show a concept version of a new model a year before the production model appears, and it’s likely that this machine will follow suit. The concept – presumably set to carry an ‘801’ name to reflect its 799cc engine, in line with the existing '701' (693cc) and '401' (373cc) Huskys  – could well appear at shows in late 2019. A production model would then be likely to appear 12 months later, in late 2020, as part of the 2021 model range.

In the meantime, Husqvarna is also working on a massive Vitpilen 1301, based on KTM’s 1290 Super Duke R, and is also expected to create production versions of the faired Vitpilen 701 Aero and Vitpilen 401 Aero concepts shown in 2017 and 2018.