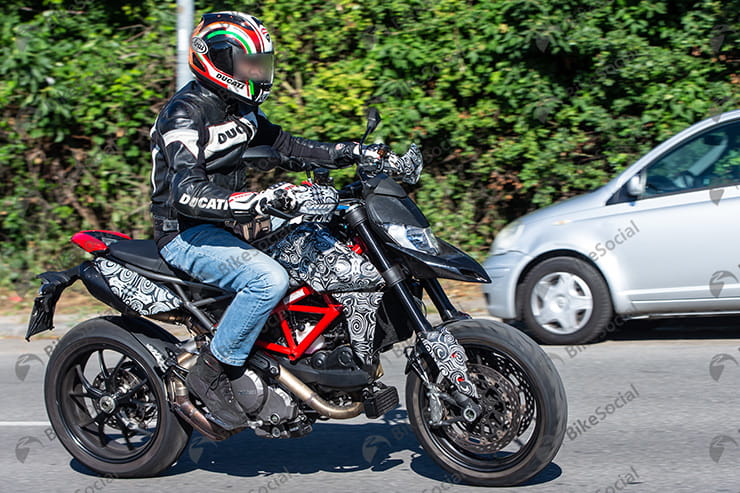 In a hefty revamp, next year’s bike is getting more power than before, along with changes to its styling, weight and emissions. But the main sections of the engine and chassis are being carried over from the current model.

While the bike has been spied testing already, we’re the first to have concrete information regarding its technical changes. As such, we can confirm that Ducati will be retaining the existing bike’s 937cc engine capacity and adding a small power boost thanks to minor revisions including a new under-seat exhaust system.

Instead it’s likely to adopt a specification close to that of the Multistrada 950, which makes nearly as much power (83kW/113PS). Although essentially the same engine as the older Hypermotard 939, the Multistrada 950’s version of the “Testastretta 11°” V-twin engine actually has a fractionally lower compression ratio – 12.6:1 instead of 13.1:1 – and features Bosch fuel injection rather than Magneti Marelli kit.

As well as helping make more power, the Bosch injection integrates seamlessly with the high-end, Bosch-made electronics used on all Ducati’s latest models. So we can be sure that the 2019 Hypermotard 950 will gain Ducati’s full ‘DSP’ (Ducati Safety Pack) including Bosch 9.1 ABS and traction control. It’s also sure to feature a host of options and riding modes, since Ducati has a track record of keeping its range at the cutting edge of electronics technology.

Engine aside, the 2019 Hypermotard 950 looks set to carry over the existing bike’s tubular trellis frame and single-sided swingarm. Information leaked to BikeSocial reveals that the bike’s wheelbase will be between 1455mm and 1555mm, depending on chain adjustment and suspension set-up. The existing bike’s range is pretty much identical, with Ducati quoting figures of 1493mm for the Hypermotard 939 and 1498mm for the Hypermotard 939SP – both roughly around the mid-point of the 2019 bike’s adjustment range.

The Hypermotard 950’s other dimensions are similarly close to the existing bike, with width, length and height all within a few millimetres of the current Hypermotard 939.

The biggest change is to the exhaust. Where the current 939 model uses a single pipe on the right hand side, the 2019 Hypermotard 950 has a pair of under-seat end cans. As well as looking better – they make the most of the single-sided swingarm, exposing the open side of the rear wheel – the under-seat exhausts hark back to the original, air-cooled Hypermotard 1100’s style.

The evidence suggests that while these pipes are longer than the single exit of the current bike, they’re freer-flowing. Tech information that we’ve seen shows that as well as an extra 4hp over the existing Hypermotard, the 2019 model gains a couple of decibels in noise output. That’s something of a surprise, since most bikes are getting quieter as new versions are introduced, but since the current model is already well under the legal noise limit, there’s some leeway to make it a little louder.

The new under-seat exhausts also require a redesigned subframe, and Ducati is shifting from the cast aluminium unit of the Hypermotard 939 to a more traditional steel trellis design for the Hypermotard 950.

As on the current bike, there will be a higher-spec ‘SP’ model as well as the base version. The Hypermotard 950 SP is no more powerful than the normal 950, so it will be distinguished by improved suspension and equipment. Chances are that the base bike will stick with Sachs-supplied suspension, while the SP uses Ohlins kit, mimicking the difference between the existing Hypermotard 939 and 939 SP.

We’re expecting Ducati to reveal the majority of its 2019 range at the EICMA show in early November, where the Hypermotard 950 will be shown alongside other new Ducatis including the revamped, DVT-equipped Diavel and the much-anticipated, homologation-special Panigale V4R.