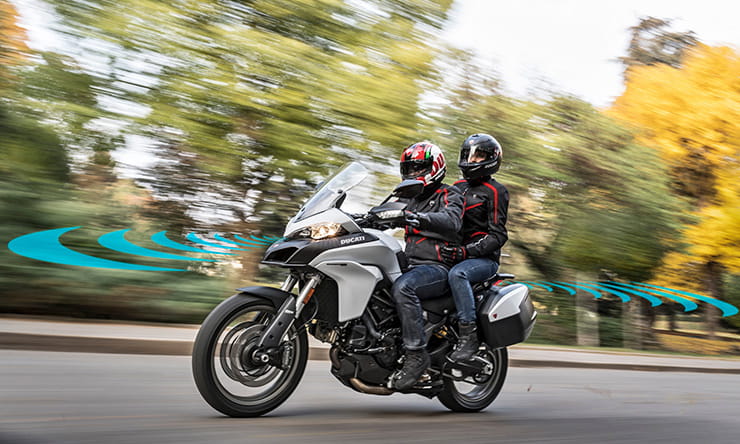 Ducati will have a production bike on sale in 2020 featuring both front and rear radar systems to alert riders to potential dangers even when they can’t see them.

The firm has made the announcement as part of its “2025 Safety Road Map” which promises a host of new technologies across Ducati’s range in the years to come, all under the umbrella ‘ARAS’ – Advanced Rider Assistance Systems. It’s a reflection of the recent and rapid evolution of similar tech in cars, which has been accelerating at breakneck pace over the last few years.

Most of us are familiar with the idea of radar; sending out radio waves and sensing when they’re reflected from objects in the environment; the same technology that gave the RAF an edge in the Battle of Britain. But while in the 1940s radar required huge masts, these days short-range systems can be built into units small enough to be incorporated into the fairing of a bike.

Ducati’s system has been under development since 2016, with help from the Department of Electronics, Information and Bioengineering at the Politechnico di Milano.

There’s a reason why we’re all trained to do a ‘life saver’ to check our blind spot before making a manoeuvre, and Ducati’s system seems set to provide useful backup to that.

The front-mounted radar will measure the distance to the vehicle in front and work in conjunction with the bike’s cruise control to maintain a safe buffer between the two. Adaptive cruise control systems like this have been available on cars for several years, but the technology has never been applied to bikes before.

The front radar will also be able to work as an alert system when the cruise control isn’t being used – potentially giving an early warning if the vehicle ahead slows suddenly or another obstacle in the road emerges.

We’ve already seen in cars how quickly technology moves once the basic building blocks are in place. Just a handful of years ago, only the most expensive cars had radar-assisted cruise control or blind spot detection, but it’s now become standard kit on even mundane hatchbacks from many manufacturers.

What’s more, the same arrays of sensors are increasingly being used to operate even more advanced systems, right up to the controversial autonomous and semi-autonomous driving aids that are now part of the most hotly contested of automotive battlefields.

Once bikes have radar, it’s surely only going to be a short leap to ‘lane assist’ systems, which tell you if you’re drifting out of your lane. And from there it’s just another step before we’re into the realms of steering-assist, helping nudge the inattentive back on course.

Again, both systems are already commonplace in cars, and provide a stepping stone towards autonomous control.

What other tech is likely?

Once again, if we look at the car market, it’s easy to see that the sort of adaptive cruise control that Ducati will offer from 2020 may lead on to other tech being adopted.

For instance, the system could prove to be an incentive to work towards automated transmissions, or semi-autos that can operate in a full-auto mode when needed. In cars, Adaptive Cruise Control often works most effectively on vehicles with auto boxes, since the best systems can than operate throughout the vehicle’s speed range. In other words, if you set the cruise control at 70mph on the motorway, and then the traffic ahead slows to a standstill, your ACC-equipped, auto-transmissioned car might well be able to come to a complete halt without the need of touching the brakes, and then accelerate away again when the traffic starts to move once more, without needing to tough the throttle.

That brings another tech into play – automated braking. With the best ABS systems already in use on bikes, it’s not going to be hard to incorporate systems that assist the rider when he needs to brake.

While Ducati’s 2020 set-up will only give a warning ahead of a potential crash, it’s only a small step to use the tech – particularly when tied to an Inertial Measurement Unit (IMU) and cornering ABS – to provide automatic braking to prevent or mitigate an accident.

And speaking of cornering ABS…

…That’s another key part of Ducati’s safety pledge. The firm says that the tech is to be wheeled out to every model in its range as part of the Safety Road Map 2025.

It’s unlikely to take until 2025 to do it, though. Ducati is already at the forefront of the cornering ABS tech – all supplied by Bosch, of course – and has already made the kit standard on bikes as far down the range as the Scrambler 1100. It’s not going to take long to spread it further still.

While Ducati is clearly leading the way here, there’s absolutely no doubt that other manufacturers will be adopting much the same technology in a similar timescale.

That means radar-assisted cruise control and blind spot systems could start appearing on production machines within the next 12 to 18 months, and certainly within two years, from a range of manufacturers.

Safety-related tech has proved to be a fast-moving field in recent years. Not long ago, the very idea of traction control on bikes was almost unimaginable – as recently as 2005 manufacturers questioned about the tech widely dismissed it as unworkable on road bikes. Now it’s almost universally adopted. The same applies to ABS (while BMW has banged that drum since the 1980s, most firms ignored the potential of ABS until less than a decade ago).

These days, no bike firm wants to be caught napping on the tech front. That means whatever radar-assisted systems Ducati introduces in 2020, its rivals will want to match or beat as soon as possible. Some may even try to beat the Italian firm to the punch by launching 2019 models equipped with a similar system.

Who’ll be at the forefront? It’s hard to dismiss Honda, which is already au-fait with the tech thanks to its car arm, and offers an advanced semi-autonomous driving system – Honda Sensing – on some of its production cars. You can be sure Ducati has been assisted by its VW patent organisation, too, since VW and its subsidiaries are also at the forefront of the tech.

While the idea of a ‘semi-autonomous’ bike might sound worrying, these systems all have safety at their heart. Like ABS brakes, at their best you won’t even know they’re there – right until they save your skin from an accident you could never have avoided without them.