Drones and the motorcycle thief 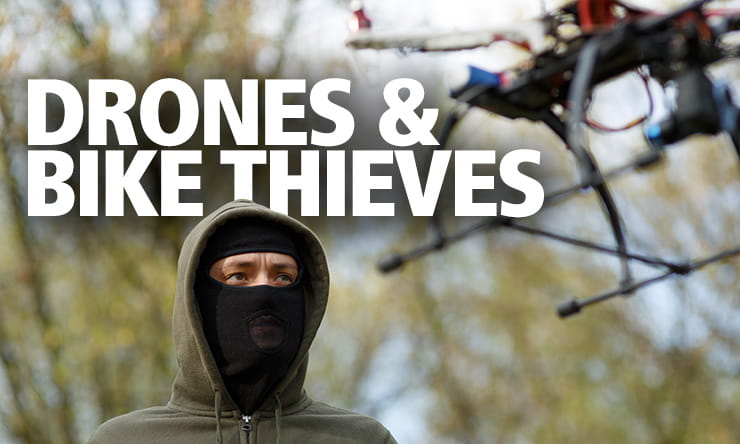 Ever since they were made available for sale to the public, the drone – or Unmanned Aerial Vehicle (UAV) – has attracted more than its fair share of bad publicity, particularly when involved in criminal activity.

The illegal use of UAVs is a pressing concern for Law Enforcement Agencies across the world as criminals adopt drone technology and seek more creative and sophisticated ways in which to commit crime. As a direct result of the criminal use of UAVs, police officers are having to investigate a fourfold rise in the number of crime reports involving drones purchased online or direct from stores.

In the UK we have seen them deposit drugs into prisons, feedback aerial scenes of premises to burglars intent on finding good access points, and working out where cars and motorcycles are kept. Last year a drone was allegedly seen being used to film a cash point as people entered their private security pin codes to withdraw cash from their bank accounts.

Many of the latest drones, quad-copters and multi-rotor helicopters already come equipped with 4K video cameras – more than twice the quality of HD – and are currently cheap to buy without any registration, permit or approved pilot training in many jurisdictions. Speeds can be as high as 70mph for mass-produced drones, with potential altitudes up to 10,000 feet. Many also offer image transmission to a handheld device, such as a smart phone, and others even include night vision facilities. One of the greatest concerns among the international security community is the use of drone technology by terrorist organisations.

The French government has now proposed a new law making it mandatory for all drones to be fitted with electronic conspicuity beacons, an idea with big implications for the future of drone regulation.

This public consultation exercise by the Direction Générale des Enterprises is looking at adding electronic beacons to all drones weighing 800g or more (so not covering smaller devices like the DJI Spark or Mavic), which would include a unique manufacturer code issued by French authorities that will be broadcast at intervals of no greater than three seconds. This digital code would also carry the drone’s latitude, longitude and altitude, the latitude and longitude of its takeoff point, its speed, its heading, and a timestamp for all the above. Each drone will also have a light visible from 150m away, flashing the Morse code for the letter U (dot dot dash) but not using the colours red, white or green, which are already currently taken for manned aviation.

While Britain's own Drone Bill – due for publication in Parliament this summer (2018) – is likely to mirror the EU's regulations in requiring the registration of all drones weighing more than 250g, the mandatory installation of visual and radio conspicuity beacons may be a step too far for the UK.

European port authorities and border guards – including those in Calais and Dover – have recently stopped suspects entering the UK in large vans that were found to contain sophisticated drones, lap tops, GPS jammers, lock picks, various offensive weapons and even loaves of bread soaked in rat poison.

Some of these vans, occupied by known bike thieves ready to trawl through our towns and cities intent on stealing our motorcycles, are suspected to have been secretly painted with covert U/V roof markings and fixed with GPS trackers to monitor their activities. Apart from being a great idea, this sort of ant-crime activity is highly contentious and of course denied by the authorities. Nevertheless, it remains a good use for the large number of drones now operated by the police in the UK.

As this article is understandably causing some chatter on social media, we wanted to add a couple of points...

Clearly, drones are not the root of all evil, and we're not looking to claim that. They offer the police and other emergency services a hugely valuable additional resource, are a brilliant tool for professional photographers, and can be a lot of fun for recreational users. The information here has come from police officers in the UK and Europe during various meetings and conferences.

Google street view and Google maps are indeed also used by criminals looking for the easiest entry and exits points in a crime, and bikes left outside regularly can even show up on the site, but the images are far from current – a UAV can show you what's happening right now.

Drones have been used to recover stolen bikes, but the French consultation is ongoing, and the British drone bill is coming. We hope it doesn't overly restrict the recreational and professional use of drones, certainly not to the extent that it already does in some other countries, but there's no denying that security forces are worried about the potential these devices have in the wrong hands.

Police investigations across the UK into drone-related crimes have gone up, but of course these aren't all bike-related. And as for the ATM mention, Northern Ireland's police recorded a drone being used to film a cash point in Templepatrick in June 2017. This was an alleged use of the technology – as we stated – because when spotted, the drone reportedly flew off and crashed into a taxi. A male suspect was forced to pay compensation to the taxi driver, but officers were unable to prove the footage was being used with criminal intent.