Bimota: the rise, the fall and the 10 most significant bikes 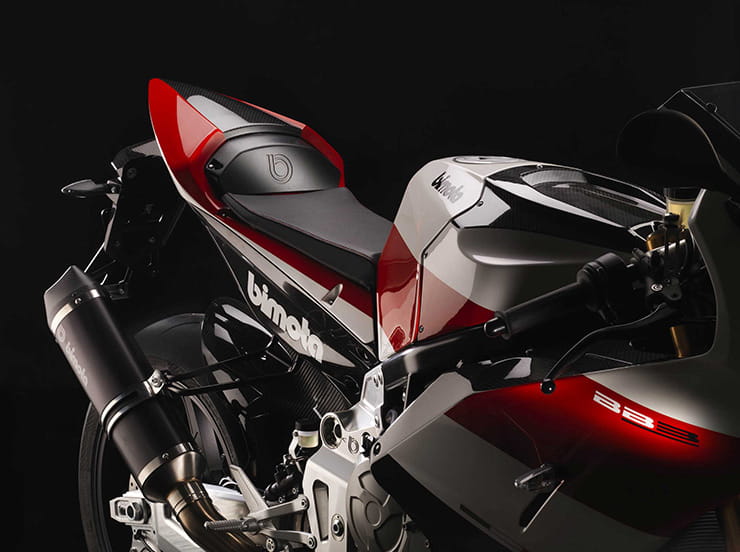 Once again the Italian firm is in trouble yet Bimota has created some of the most desirable and outright interesting bikes ever seen.

After Victory and EBR have said their recent farewells, it also seems Bimota are again in a serious trouble. Recently its Rimini headquarters has been dismantled and spare parts moved near Lugano (CH) where the current Bimota owners, Daniele Longoni and Marco Chiancianesi, live.

The future of the company remains unclear but it seems latest bikes have been assembled in Switzerland and shipped to Australia while a collector close to the company, said as the brand is on sale now but no bids have yet been received.

From air conditioning and heating equipment to HB1

Bimota is the acronym of Bianchi, Morri and Tamburini, the surnames of three friends in the air conditioning and heating equipment business. They have a common passion for motorcycles, especially Tamburini, owner of a sparkling white MV Agusta 600, completely self-built.

The motorcycle activities of Bimota begun after a crash at the Misano Circuit on 1972. The notorious anecdote says that Tamburini was riding a Honda 750 Four and he lost the control at the Quercia, the fastest turn at Misano. Back home and with three broken ribs, he redesigned a complete new frame-set; the HB1, a breathtaking superbike weighing only 155 kg, a huge 50kg lighter of the stock Honda 750 Four!

The origin, rise and fall

For over 45 years of Bimota's production, three chronological times linked with the technical direction of Tamburini, Martini and Marconi, the three key people related to the success and downfalls of the superbikes made alongside the Adriatic Riviera.

In 1983, when Tamburini left Bimota for the emerging Cagiva Group, he was replaced by a former Ducati engineer, Federico Martini. Despite his young age and relative inexperience, he was able to design two best selling bikes of Bimota’s history, the DB1 and the YB4 as well as doubled its production from 600 to 1200 bikes per year.

During the nineties, the quality of Japanese frames and components was getting better compared to the previous decade and the performance gap between Bimota and Japanese bike was reduced. Bimota decided to concentrate its forces on the futuristic Tesi in order to keep a distance from the new sport bike generation.

Beginning with the V4 Hondas (VFR 400 and 750), the Tesi project was moved on the Yamaha 5-valve engine and finally industrialising in the Ducati 851/904 engine five years later. Although the project was still futuristic, Bimota had wasted too much time and the Tesi failed its expectations becoming a collectible bike instead of a cash cow.

Much more awkward was the 500 V2 project, the first bike 100% made by Bimota, including the engine (assembled on Motori Franco Morini). Underperforming and equipped by an unreliable injection system, after many attempts it was fixed by turning the direct injection system into classic carburettors.

From bankrupt to Switzerland

The unsuccessful Tesi and 500 V2 projects drove the company to bankruptcy in 2001. Two years later, thanks to an investment by Milan-based Roberto Comini, Bimota restarted under the technical direction of Sergio Robbiano. He focused on Ducati platform creating the DB5 and DB6 Delirio and, in cooperation with Vyrus, the rebirth the unlucky Tesi.

The DB7, powered by the 1098 Ducati engine was the last model before the company was sold to the Switzerland contractors, Daniele Longoni and Marco Chiancianesi. Both passionate and active gentleman riders, they brought riches grand enough to boost the brand in the right direction.

Under their direction, they grew the Ducati engine line-up and launched BB3, the fastest Bimota ever made, driven by BMW's S1000RR engine. Despite the bikes great looks and being powered with the best-in-class engine, the BB3 also didn't achieve the heights the company hoped for.

Starting with its origins, the activities the Bimota grew up quickly in sales and popularity thanks to the strong reputation built on the racing. In 1980, Jon Ekerold and his Bimota HB3 won the 350 World Championship, plus also champions like Uncini, Mamola, Lavado and Cecotto have won races on Bimota frames.

In 1987, the YB4 I.E. won the final edition of the TT/F1 World Championship with Virginio Ferrari, before the WSBK was introduced. Thirteen years later the talented madman, Antony Gobert, was able to push his SB8R to first place in race 1 of the Australian WSBK round.

THE 10 MOST SIGNIFICANT BIMOTA'S EVER MADE 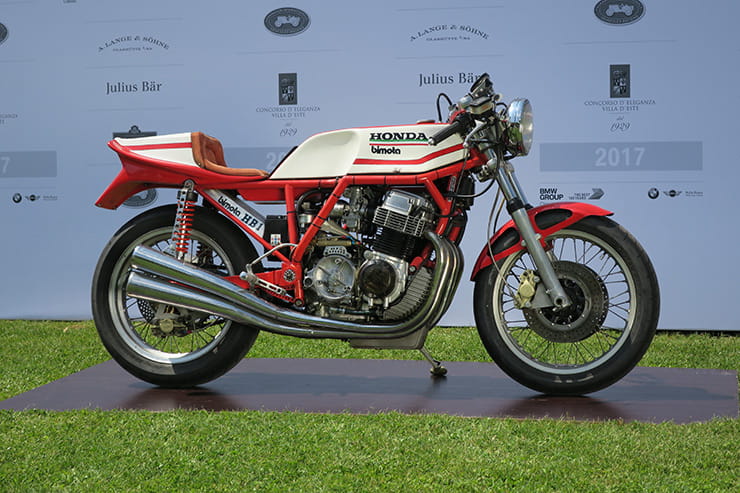 The first masterpiece made by Massimo Tamburini. He created a complete kit to transform the best-selling Honda 750 Four into the Bimota HB1. Only 10 units were made - one complete bike and 9 kits were sold to the Swiss importer, Rossi & Roncoroni in Locarno. In 1974, the price of complete kit was 4.200.000 Lire. (€2100) 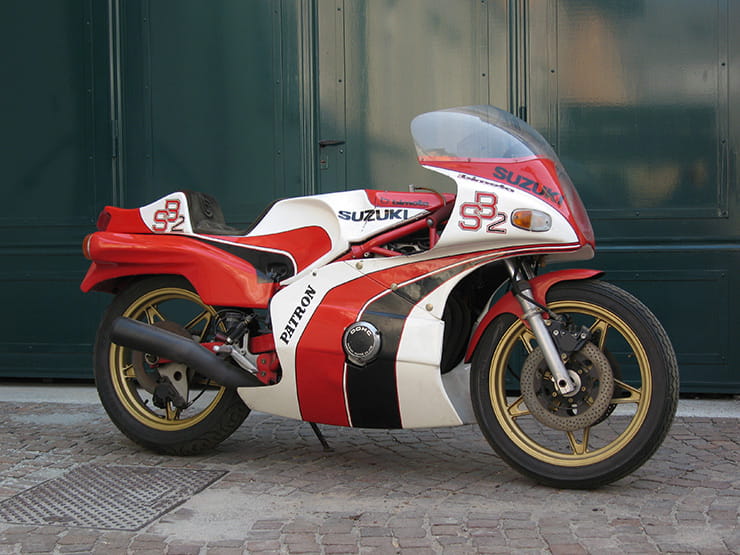 The first Bimota powered by Suzuki engine which was sold in kit form as a complete bike. The SB2 was built to order from SAID, the Italian Suzuki importer. Revealed at the Motorshow in Bologna in 1976, it came out of the blue for its revolutionary design; a tank under engine, progressive rear suspension, pipes under seat. Only 200 frames were built, 170 of them sold but the remaining 30 were destroyed. The price of complete kit 3.100.000 Lire (€1600) while the complete bike was 7.100.000 lire (€3666). 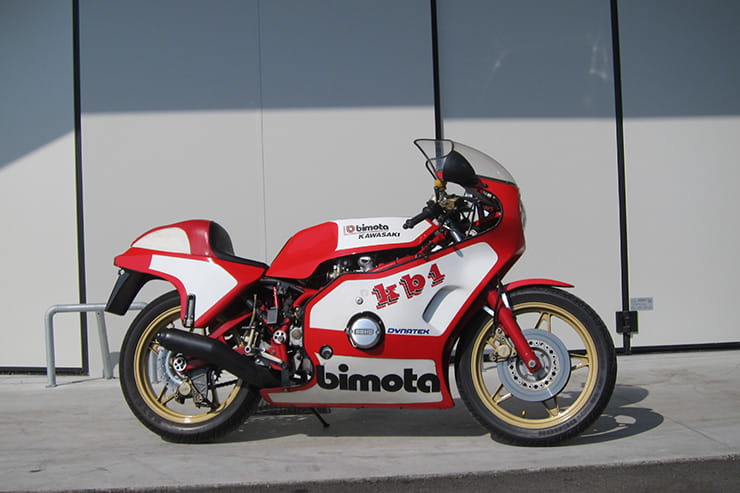 Powered by a Kawasaki Z1000 engine, the KB1 was the most successful Bimota in the Tamburini era. 827 bikes were produced in three series from 1978 and 1982, the KB1 is also the first model to show only the Bimota badge on the tank (MK3). Only 16 were completely assembled in the factory and sold at the astronomical price of 8.100.000 lire (€4183), the same price of a contemporary sports car like Lancia Beta Montecarlo. 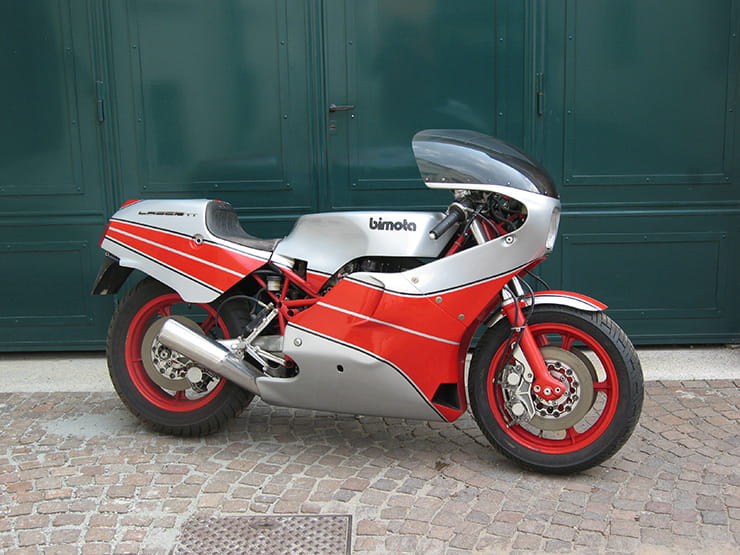 This was Massimo Tamburini’s favourite bike, strictly focused on reducing weight instead of looking for more power. The KB2 was also the first bike equipped with 16” Campagnolo wheels and it was powered by the middleweight Kawasaki 550. 177 bikes were built, 64 assembled in-house and the rest sold as kits. Tamburini also made a one-off KB2 for himself; ultralight and powered by 600 TT2 engine configuration capable of 75 hp instead of standard 54. The KB2 was also the last Bimota model available in kit form. 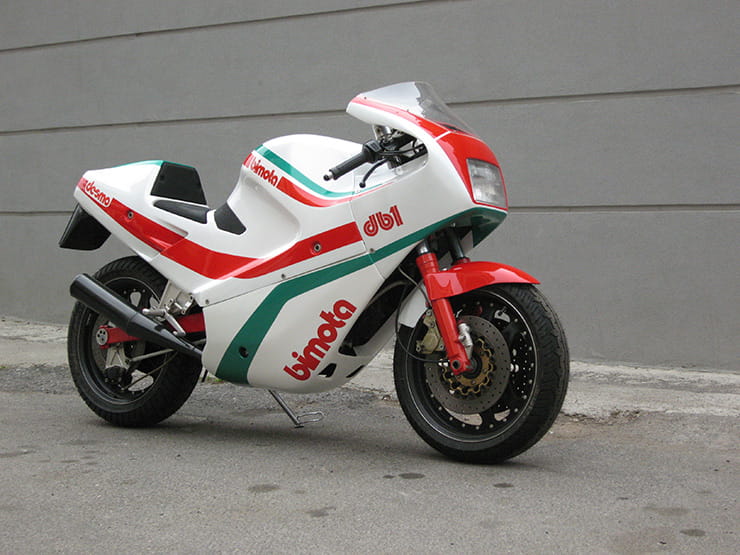 Launched in 1985, the DB1 was the first bike created by Federico Martini. Powered by Ducati Pantah 750 engine, it was also the first 100% Italian Bimota. It introduced close-fitting integral fairing that hid all mechanical parts just as the Honda CBR and Ducati Paso did some years later. Weighing only 160 kg and with 63 hp (which then became 69 in the S version equipped by bigger carburettor and open pipes) more than 500 bikes sold in the two year production, more than two-thirds of them in Japan. 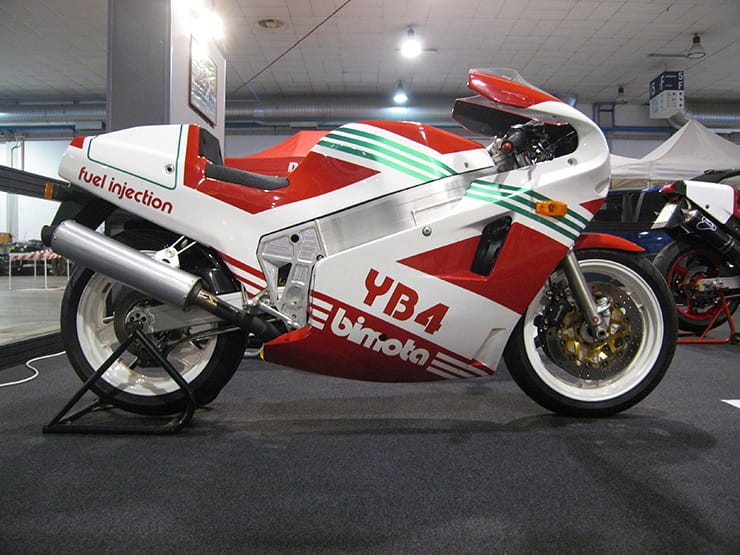 The YB series changed the personality given to Bimota by Tamburini with a tubular steel frame. Martini believed in the aluminium parametrical frame quality and the resulting TT/F1 world championship win in 1987 with Virginio Ferrari on a YB4 I.E. showed as he was right.

One year later Bimota launched a road legal version of its YB4 I.E. and most buyers were actually riders instead of passionate collectors. Actually, the YB4 I.E. was the best Bimota for track use the firm ever made. It mixed the best frame of the superbike bunch combined with the most advanced 4-cylinder of the time (the 5-valve Yamaha was modified with electronic injection). It was simply the top bike of late eighties. 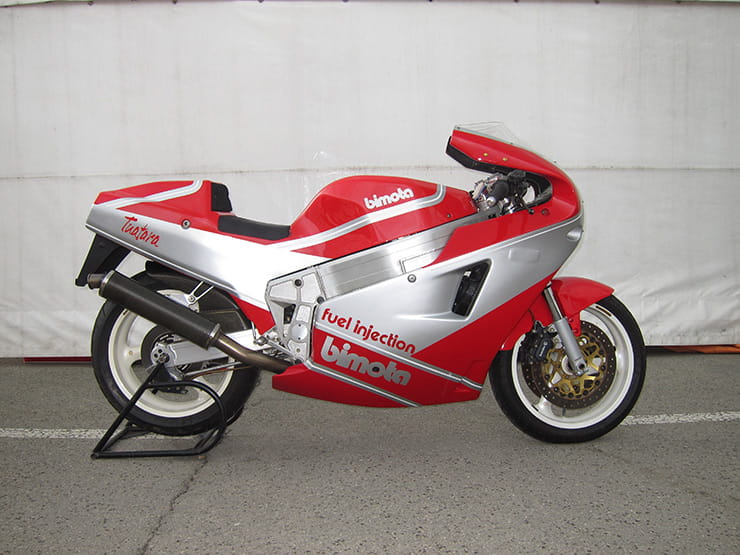 The Tuatara was a special, limited-edition run of only 60 units launched at the 1989 and was one of first bikes in the world equipped with a LCD digital dashboard. The Tuatara was powered by FZR1000 engine with Marelli Injection giving it a max power of 145 HP @ 9500 rpm. With a claimed maximum speed of 175mph it was also the fastest production bike at the time although ‘Tuatara’ was the name of a 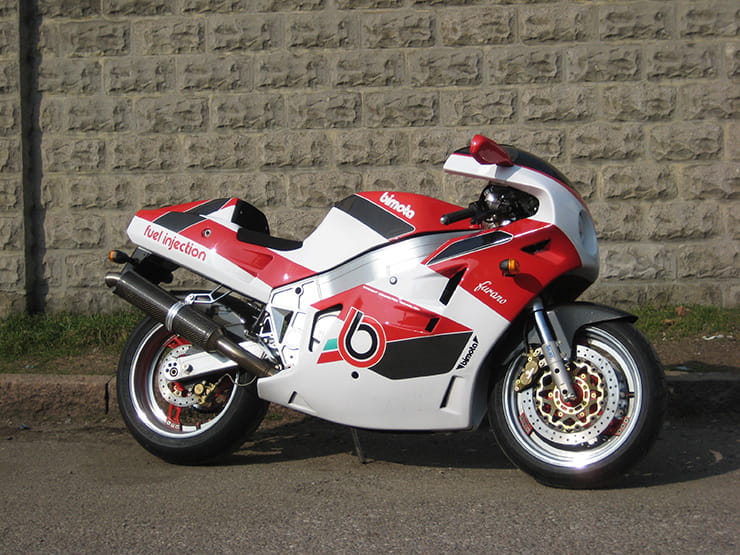 Furano is the name of the wind in the Adriatic sea but also one of more best beautifully finished and expensive Bimota’s ever made. On sale in 1992 at the astonishing price of €25,000, or two FZR1000 EX-UP, the YB8 Furano signalled the introduction of full Ohlins equipment. Fully carbob-fibre shrouded, it only weighed 180 kg while the ExUp engine, customised by Bimota, optimistically claimed 164 hp instead of 145 of the stock engine. 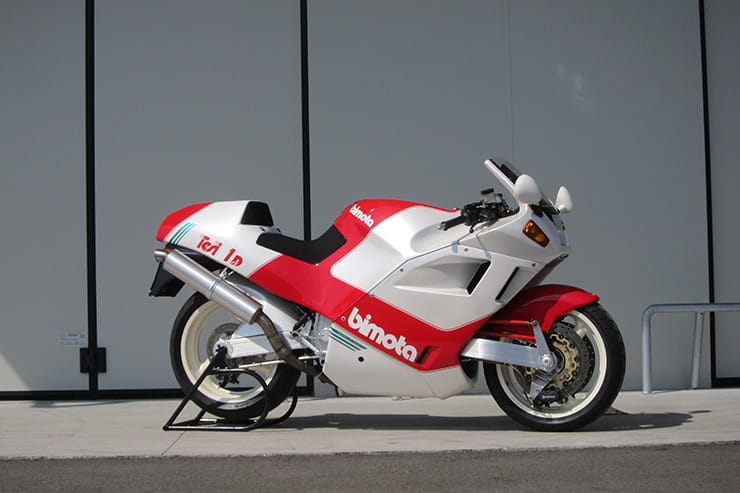 The Tesi has shown the brave of this factory boutique. After a long period of prototype testing, powered firstly by the Honda V4 engine and then Yamaha’s FZ750, Bimota developed the road version with the eight-valve Ducati Desmo 851 motor. The core structure of the Tesi is the billet-aluminum “omega” frame, to which both the front and rear swing-arms attach. The main advantages were its lightness and stability. Despite Bimota belief in this project, making plenty of upgrades in every direction, the Tesi, growing up to become 904cc, was never the star that Bimota hoped for. 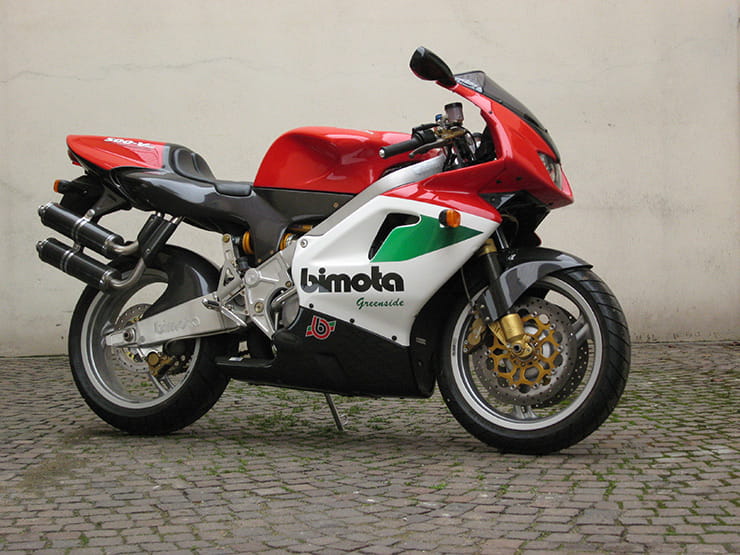 Nowadays, the 500 V2 is one of more collectable Bimota’s but it was also the bike that killed Bimota. Lovely design, super light but underperforming and unreliable, the first 100% Bimota bike was a total disaster. Assembled from 1998 to 2004 with a claimed of 110 Hp, the 500 V2 engine was produced by Franco Morini and developed with a highly sophisticated direct injection that never worked, and all bikes were instead converted to carburettors. Many customers demanded that Bimota take the V2 back and refund their money and the company ended up bankrupt.