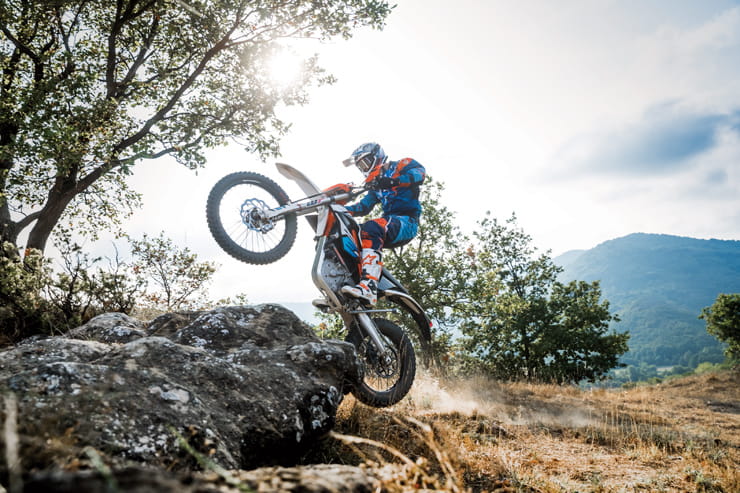 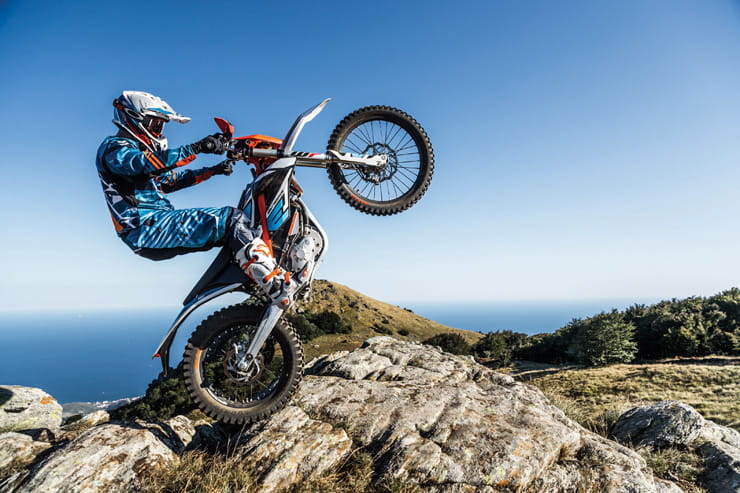 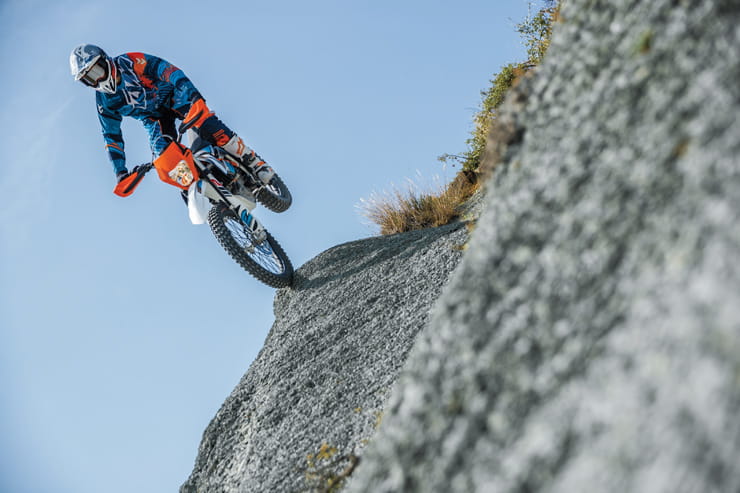 KTM have updated the battery performance of their flagship electric bike, the Freeride E-XC, for 2018. They say this means the road legal, dual-purpose machine now has 50% more capacity – and, without mentioning actual test figures, KTM suggest in real terms it means if the previous E-XC could run for an hour, the new machine can now stretch to an hour and a half at the same level of performance.

The new battery, made by Sony, takes advantage of advances in lithium-ion technology to deliver more zap in the same-size package. It’s uprated to 18kW peak from the previous Freeride battery’s 16kW – an equivalent increase of around 3bhp, from 22bhp to almost 25bhp (for battery nerds, the kWh rating is up from 2.6 to 3.9kWh; effectively, it can work either harder or for longer). Peak torque – it’s not really ‘peak’ because it’s delivered from standstill – is 31 lb.ft, or about the same as KTM’s 250 EXC 250cc four-stroke engine. The Freeride E-XC is, however, A1 licence compliant and legal for 17 year-olds.

Charging time has gone up on the old unit: the old battery took 50 minutes for an 80% charge and 80 minutes for a full charge, but new battery takes 75 minutes for 80% and 105 minutes for 100%. But the Freeride E-XC now incorporates a recharging system that feeds power back into the battery when freewheeling downhill. The level of motor performance can be set from the same three ‘power’ mode buttons as previously, giving the options of Cross (full power, least range), Enduro (less power, more range) and Economy (max range with regen). 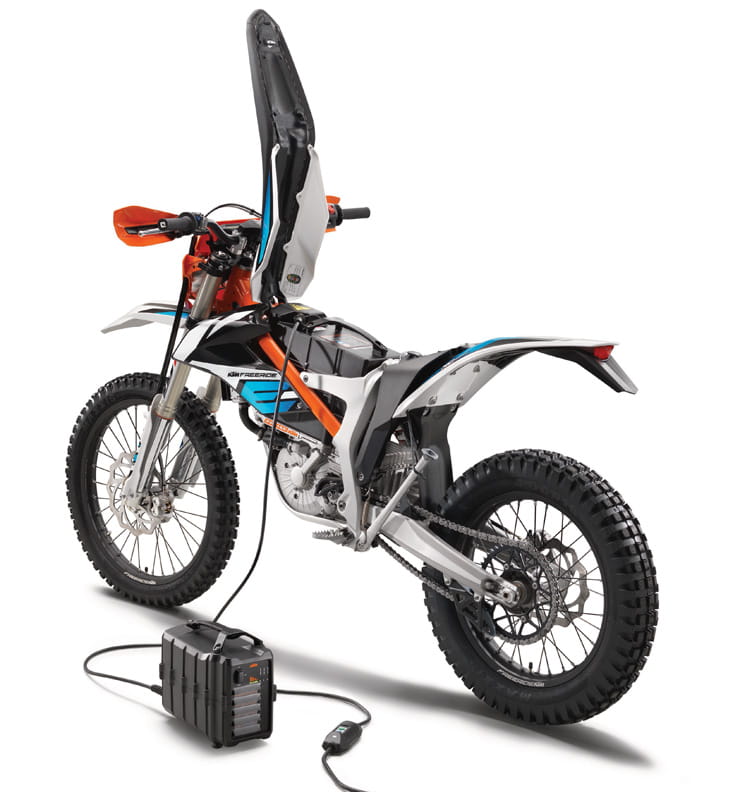 Also as previously, the Freeride E-XC’s battery is quickly removable by lifting the seat and undoing four bolts (KTM say it takes as long as filling a fuel tank at the pump), which then gives the rider the option of having a standby battery ready to go when using the Freeride E-XC at a closed off-road track. However, at around 8kg, it’s a bit weighty to lug a spare about if you’re green laning. Although if you’re one of the 3000 people worldwide who’ve actually already bought an electric Freeride since it was launched in 2015, the good news is the battery from the new bike will happily fit in the old bike – and, with the new power-source costing £3600, it’s cheaper than buying a new bike. But by how much is unclear – the price of the E-XC has yet to be announced because a volatile exchange rate precludes pricing until the bike is in production at the start of 2018. The old Freeride E-XC was a hefty £10,299 – which is an eye-watering sum for 125 performance, no matter how advanced the battery technology. 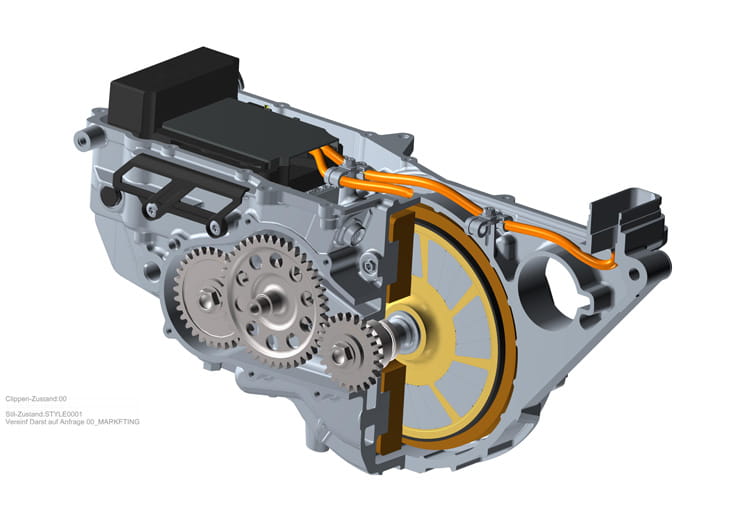 The Freeride E-XC’s electric motor, made in-house at the Austrian factory by KTM, is watercooled as before; tests in the early years of the Freeride’s development, in which the battery was repeatedly swapped to give continuous use, saw the motor and ECU begin to overheat – hence the need for watercooling. But the motor is unchanged from the old bike; the only other changes besides the battery include uprated WP suspension front and rear, now incorporating opposite rebound and compression damping in the 43mm legs at the front and with a lighter WP rear shock. Minor changes to bodywork and the clocks complete the 2018 bike. 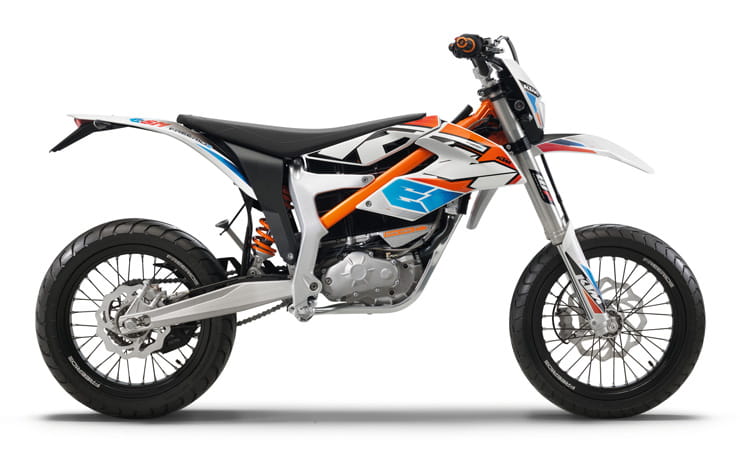 As for a future upgrade to the Freeride E-SM, KTM say the supermoto model (which pure road use reveals to have an even shorter battery life of around 20 miles) will need extra features for city use, such as storage space, and as such they have no update planned. However it’s worth noting the spark of KTM’s e-mobility development was a battery powered concept scooter, shown at the Tokyo show in 2012, so look out for something along those lines before long. KTM say the electric Duke-styled KTM that’s been spotted in testing is an experimental prototype and current battery technology is not ready – too heavy and limited – to fulfil the needs of a fully road-oriented machine.

And with regards to the proposed MotoGP e-class in 2019, KTM say they’re unconvinced of its success in the short term. 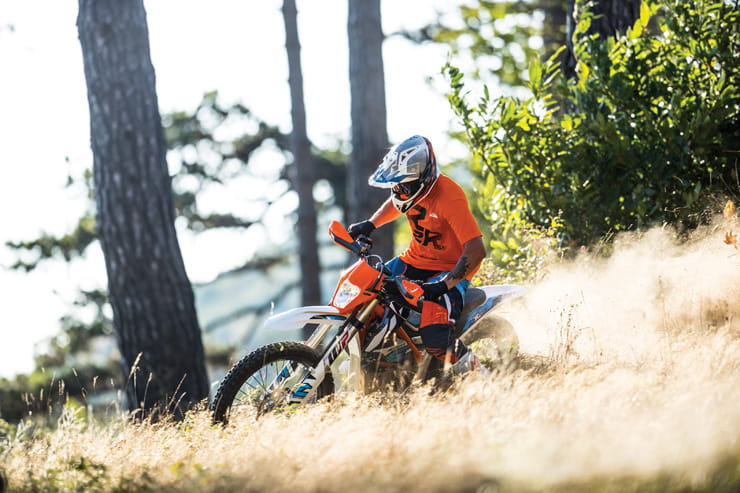 Whether or not you’re turned on by the prospect of electric bikes – and, at the moment, neither price, performance nor practicality of any anything on the market, including the Freeride, gets even remotely close to a petrol engine – the noise around them is steadily growing (even if the bikes themselves remain silent). KTM are convinced they’re worth investing over 20 million euro in since 2007 – but maintain nothing electrical is seen as a direct replacement for high-status petrol-engined bikes just yet; the point of their investment is to explore the potential for the emerging crossover powered two-wheeler market, with a machine placed somewhere between a powered mountain bike and a moped. And you have to give them kudos for taking the plunge and making the effort.

But would you buy one? Electric bikes remain, essentially, expensive toys and while KTM’s Freeride is one of the most compelling – it has a very high chassis spec and is just about viable for someone looking to bomb around a local off-road track where noise is an issue but plugging into the mains isn’t (a pretty specific set of demands, admittedly) – it’s still likely to be over ten grand. 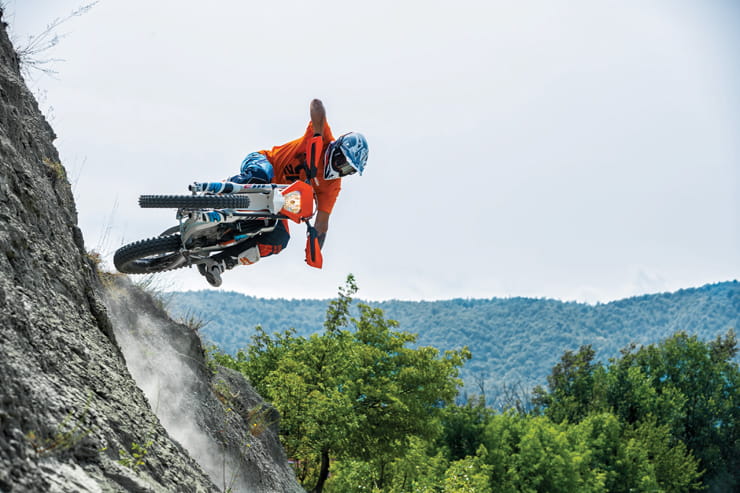