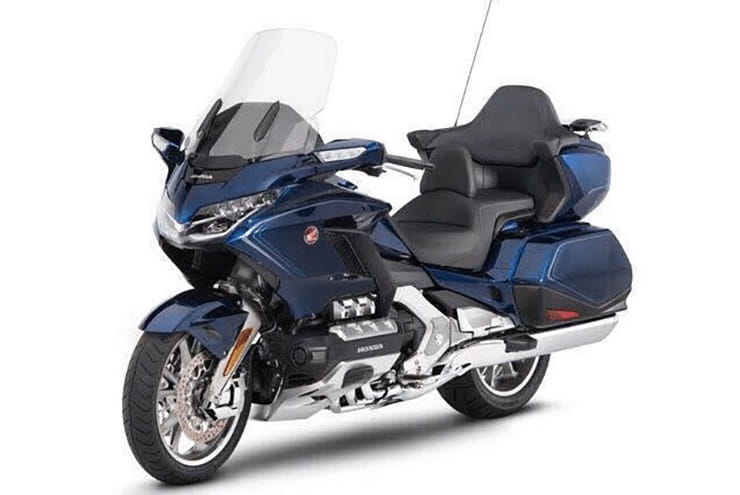 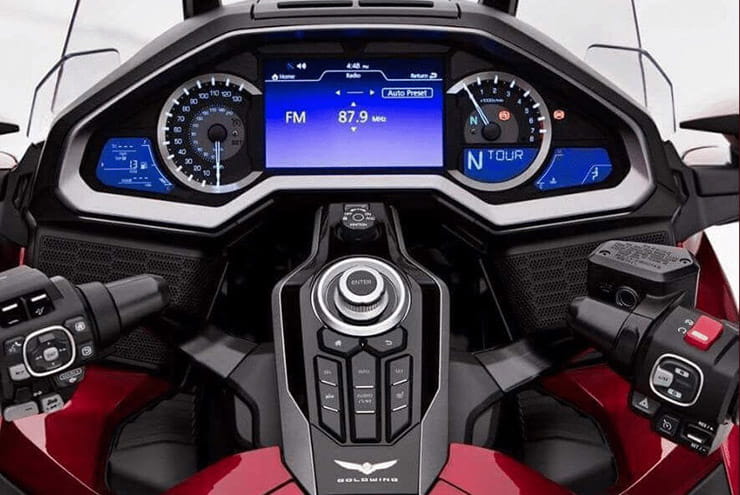 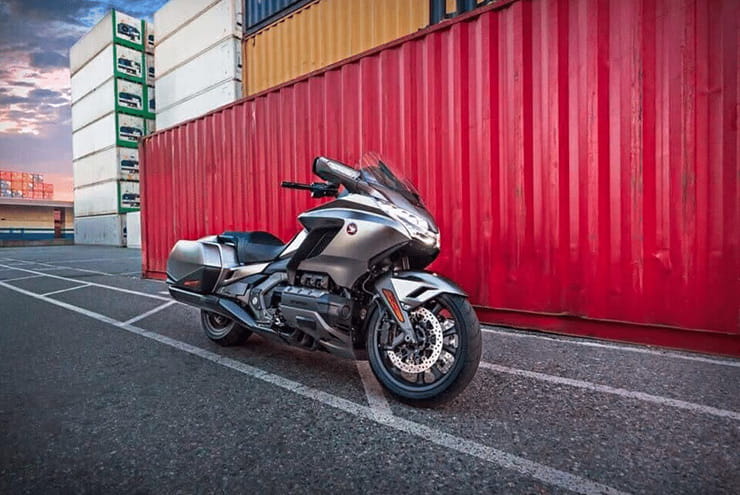 Pictures of Honda’s new Gold Wing emerged a couple of weeks ago but until now there’s been no detailed technical information on the bike. Now we’ve exclusively got our hands on the key figures that demonstrate exactly how different it is from its predecessor.

While all the details will be officially revealed on 24 October, the information we have now means it’s finally possible to make direct comparisons between the new machine and the old version.

We can reveal that there are five separate models in the new Gold Wing family. The basic versions are the GL1800 and the GL1800B (F6B) bagger. There are also GL1800D and GL1800BD models, each with Honda’s DCT semi-automatic transmission. The official documents we’ve seen also reveal a GL1800DA. This is the heaviest version, and we reckon the ‘A’ indicates it’s fitted with the airbag that first appeared on the Gold Wing a decade ago. 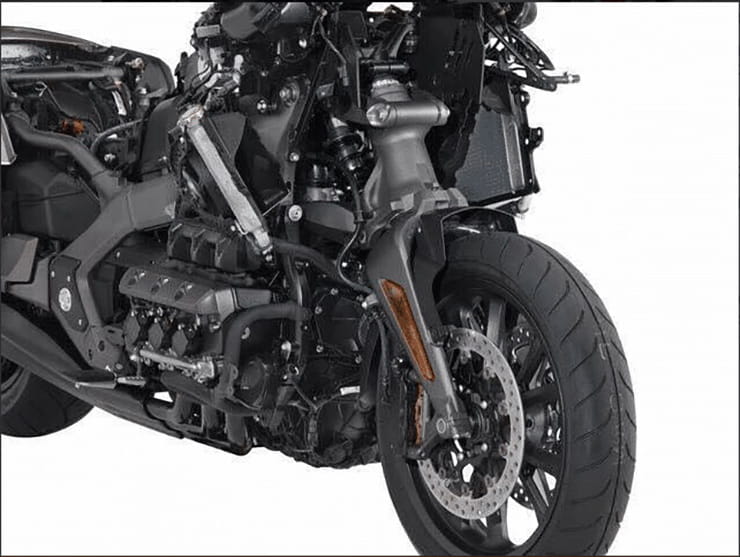 We already know that one of the new Gold Wing’s key technologies is its Hossack-style front suspension system. This eliminates stress at the headstock and means the frame can be significantly lighter. How much lighter? A lot.

Ready to ride, the existing GL1800 Gold Wing weighs in at a massive 421kg. According to the figures we’ve seen, the new version will be 42kg less than that, with a wet kerb weight of 379kg for the basic model. Interestingly, the DCT transmission doesn’t add any weight, while the ‘DA’ version of the bike is 4kg heavier at 383kg.

In stripped-back F6B/GL1800B form, with no top box and a lower screen, the bike is lighter still. The current F6B weighs 385kg wet, while the new one comes in at 365kg. The D version with the semi-auto transmission is actually rated at 1kg less; 364kg. 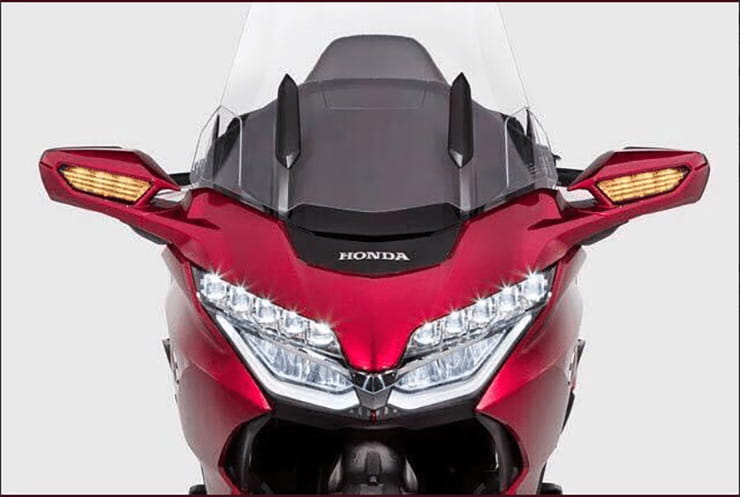 Not only is the new bike lighter than before, it’s physically smaller. Of course, it’s a relative measure – the Gold Wing is still a behemoth of a bike.

Overall length drops from 2630mm to 2575mm, while the F6B is down from 2605mm to 2475mm thanks to the lack of top-box. The new bike’s width is also a fraction less, at 925mm compared to the old model’s 945mm. And if you’ve got a narrow space in your garage, opting for the DCT version cuts off another 2cm (to 905mm) because there’s no clutch lever sticking out.

The new bike may be shorter, but its wheelbase is actually a little longer than before – all versions come in at 1695mm, where the old model was 1690mm.

Anyone with experience of the old Gold Wing will know that it’s unusual among big tourers in lacking an adjustable-height screen. That changes on the new one. There are also as many as three different screen options, from the cut-down F6B’s version (1340mm high at its lowest level) to a tall screen on the full-fat Wing (1640mm tall when extended to the max). 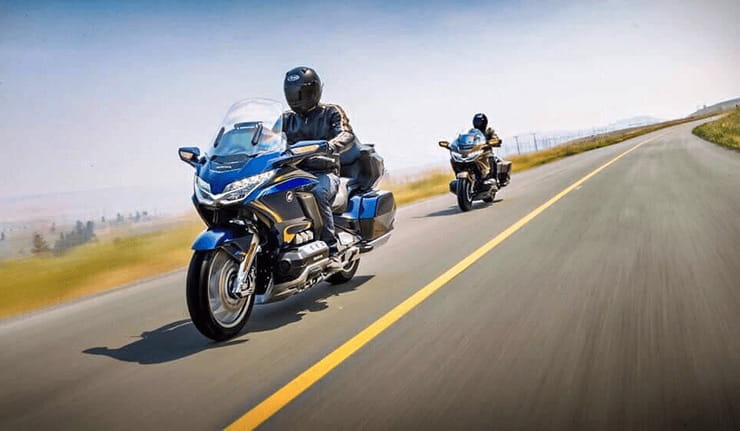 While it’s long been clear from the pictures that the new Gold Wing and F6B are still six-cylinder machines, the details of that engine have been secret. We now can confirm that it’s still called GL1800, as before, although the engine capacity increases by a single cubic centimetre, from 1832cc to 1833cc.

The Gold Wing has never been about speed and power, but the new version will be quicker than its predecessor, at least in acceleration terms. The 42kg weight saving alone would ensure that, but the new bike’s power is also increased. Where the old version achieved 87kW (116.7hp/118.3PS) at 5500rpm, the new model makes 93kW (124.7hp/126.4PS). Peak torque is likely to be similar to the current model, which achieves 167Nm/123lbft at 4000rpm.

In terms of out-and-out speed, the existing Gold Wing is rated to 124mph (200km/h). However, the figures we’ve seen for the new version reduce that to only 180km/h – which equates to 112mph. If correct, that figure is sure to be an electronically-restricted top speed rather than the bike’s actual peak potential. In Japan, top speeds must be restricted to 180km/h, which would explain why Honda has chosen that number. Will Gold Wing buyers be bothered? It’s unlikely, at least outside unrestricted autobahns in Germany, as rarely will they get the chance to explore speeds that high on the road.