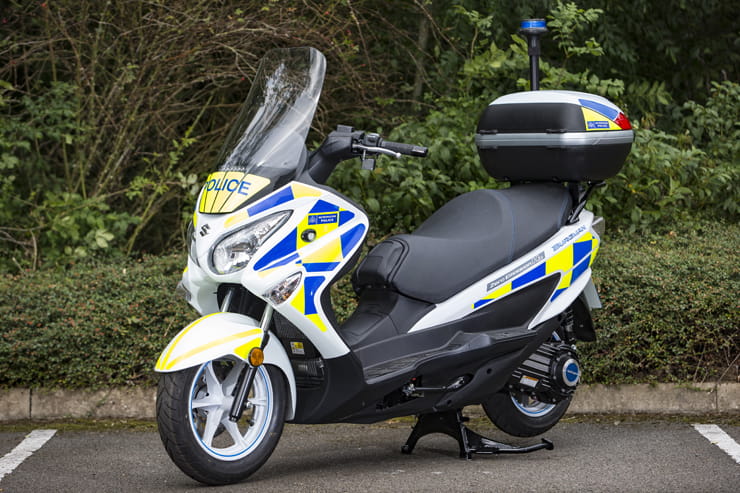 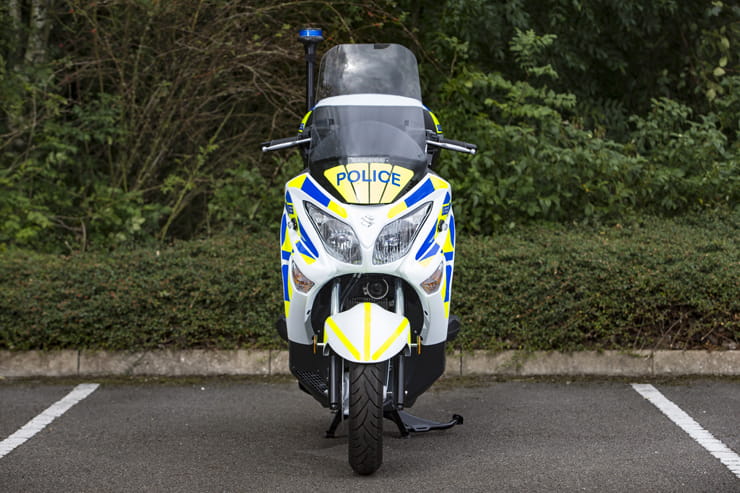 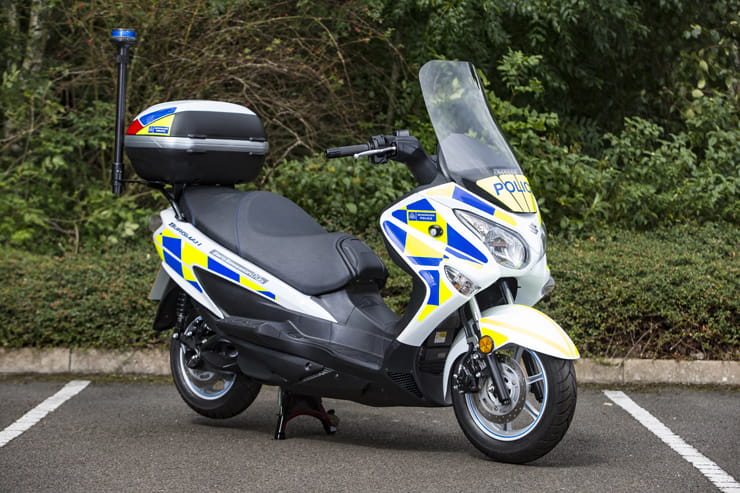 Suzuki is supplying a fleet of Hydrogen fuel cell powered Burgman scooters to the Metropolitan Police for an 18 month trial. The bikes, believed to be the first production two-wheelers to use Hydrogen power, will be assessed for real-world tank range, performance, service requirements and life cycle of the fuel cell in London, a city that exceeded its annual air-pollution limits in the first month of 2017.

Bobbies on a Burgman sounds like a gas to us so BikeSocial spent some time with Damian Davis and Kazuhiro Mizutani from Suzuki, who have developed both the technology and the bike in a project spanning 10 years. Our mission was simple; to ask the questions everyone needs to know about Hydrogen power. 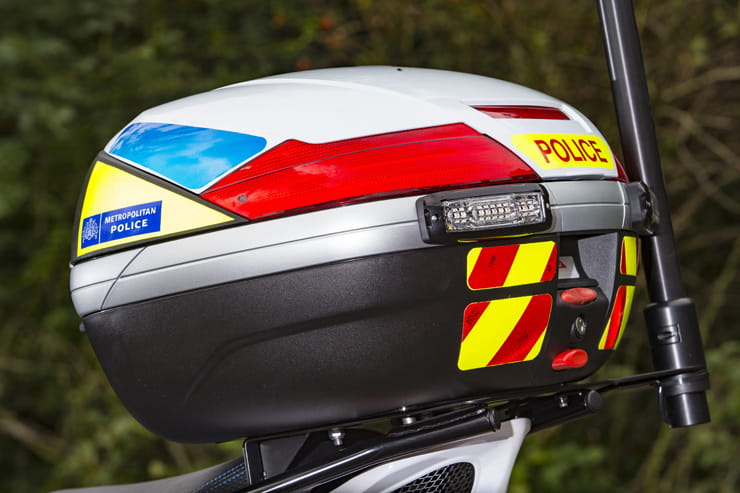 This could be the future because…

A hydrogen fuel cell powered vehicle is essentially an electric vehicle that doesn’t use a battery to power the motor. Instead, it uses dynamic electrochemistry that generates power from Hydrogen stored in a tank and Oxygen from the air passing through the fuel cell. This process is more efficient, giving a larger range from a given volume of Hydrogen than equivalent batteries. Plus, once the tank is empty it can be re-filled with hydrogen in a matter of minutes, rather than the several hours required to charge a battery.

How does it work?

There are three parts:

The fuel cell contains 144 smaller cells, each containing a polymer membrane coated in a platinum/carbon catalyst. The catalyst is what allows the chemical reaction that turns Hydrogen gas into electrons and protons to occur at real world temperatures and pressures. The electrons generated from this reaction provide a current that drives the electric motor and the protons combine with Oxygen in the air to form water vapour, which is the only waste product.

When you turn the key (don’t call it ignition because nothing combusts), pressurised Hydrogen gas is pumped from the tank into the fuel cell. At the same time an electric fan starts to draw air into the fuel cell through two filters. One of these filters remove particulates, the other is a chemical ‘scrubber’ that removes compounds such as carbon monoxide that will damage the catalyst. It takes a few seconds for enough chemistry to happen to prime the system and then you’re ready. Twist the throttle and off you go.

As well as providing the Oxygen to mop up the protons the airflow also keeps the fuel cell cool. When you switch it off, the Hydrogen flow is cut, the fan stops drawing in air and the chemical reaction finishes. 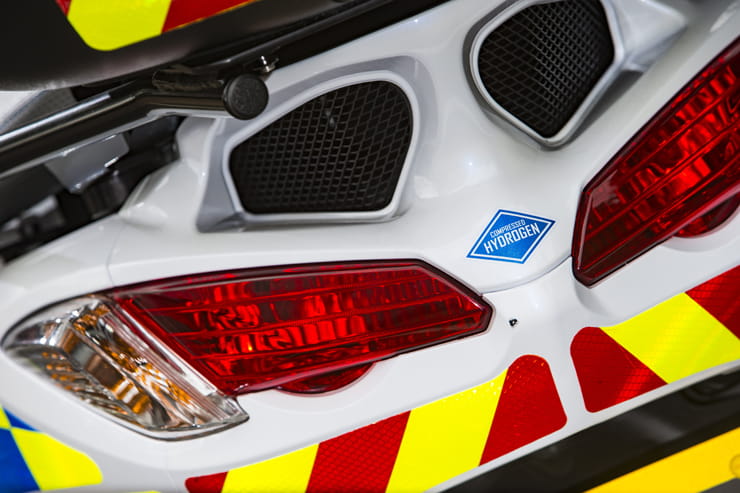 So no batteries then?

Er, yes, there are a couple. One is a compact, high voltage Lithium Ion battery kept charged by the fuel cell (mostly when the fuel cell is on but the bike is stationary), which provides an instant-but-short-lived power boost when needed. The other is a conventional 12v unit to power the fan and things like the lights and horn when stationary

How fast will it go?

That depends on what you want. Think of it like this… It’s the spec of the electric motor that provides the speed. The motor output is what we’re used to measuring as torque or BHP. In the TT Zero race on the Isle of Man, a battery-powered electric bike (which is much heavier than a fuel cell machine would be) managed an average of 119mph for 37.7 miles with a maximum speed well in excess of 150mph. What the fuel cell does is provide energy to the motor, which is more like the equivalent of MPG (or MPVG because it’s miles-per-volume-of-gas). If you want more speed, you’ll need more power, which needs more current from the fuel cell meaning lower MPVG. 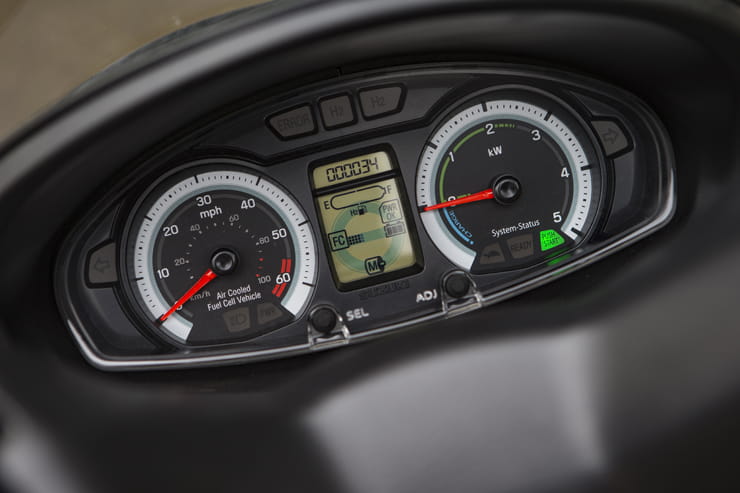 How long does a tank of Hydrogen last?

It depends how you use it. Fuel cell efficiency is increasing all the time as is electric motor technology, but combustion engines have had a 120 year head start and modern fuels are complex molecules. Right now, the relatively small tank on the modified Suzuki Burgmans lasts about 70 miles, but part of the purpose of the trial with the Met Police is to see how this varies in real life, day-to-day use in all weathers and traffic conditions

Refuelling takes about five minutes. The gas tank has to be refilled quite slowly because otherwise the high pressures (about 700bar) would generate a lot of heat and that would mean when it cooled, you wouldn’t actually have a full tank.

Right now there are a few Hydrogen filling stations around the UK. Not enough to make a practical network, but, as the popularity increases the infrastructure will come. 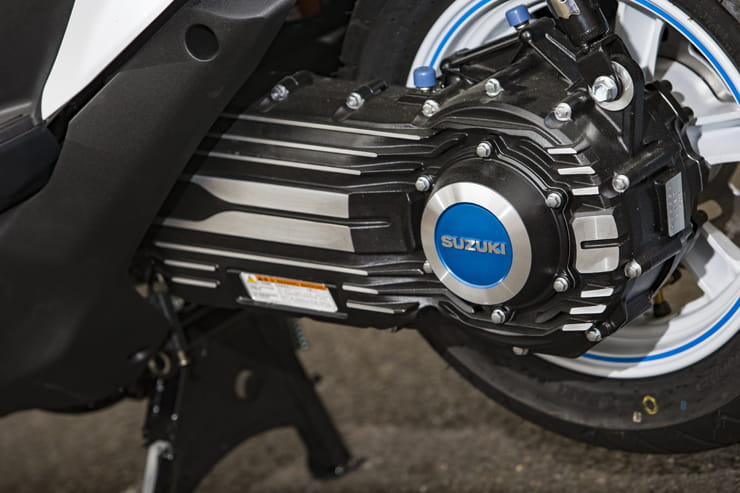 Will it be reliable?

Other than the fan, there are no moving parts to the fuel cell so reliability should be excellent. The polymer membranes and catalyst have a viable lifespan, but this will be determined by how effective the filtration is. So, it’s the quality and performance of the filters that will be key. Conservative estimates are that current membranes should be good for a minimum of 4000 hours of use, which, at an average of 40mph would be 160,000 miles, making your current bike’s 10,000 mile service intervals look a bit miserable.

Filter changes will be more regularly required though and part of the police’s trial is to establish how long they last in current environmental conditions. Right now, with the majority of vehicles being petrol or diesel our atmosphere is choking with particulates and harmful chemicals that, without effective filtration will kill the fuel cells quickly. But as more Hydrogen or electric vehicles are on the road, the air will be cleaner and the filters will last longer.

Anyone who’s seen the photo of the Hindenburg airship toasting a small part of New Jersey in 1937 might wonder about sitting on top of a tank of Hydrogen. Thankfully, the Hydrogen containment system on fuel cell vehicles is considerably more robust than canvas stretched over wire and the safety systems designed-in will ensure that, in the event of an incident, the gas will vent through a port rather than just explode. So, should the very solid tank (they’ve fired real bullets at it) be damaged you’ll have a single jet of burning gas, coming from a vent designed for just that purpose which is quickly spent, rather than an out-of-control inferno. Which also means the rest of the bike will be likely to remain undamaged - which is very different to when a petrol vehicle catches fire.

On the Burgman, the gas cylinder is mounted in the same space as where the petrol tank would be, which, on a scooter is well out of the way. Refuelling is potentially a dangerous event for any combustible fuel but the Hydrogen filler system has an infra red detection system that has to ‘recognise’ the nozzle (and the nozzle has to recognise the filler) in order to pump the gas. 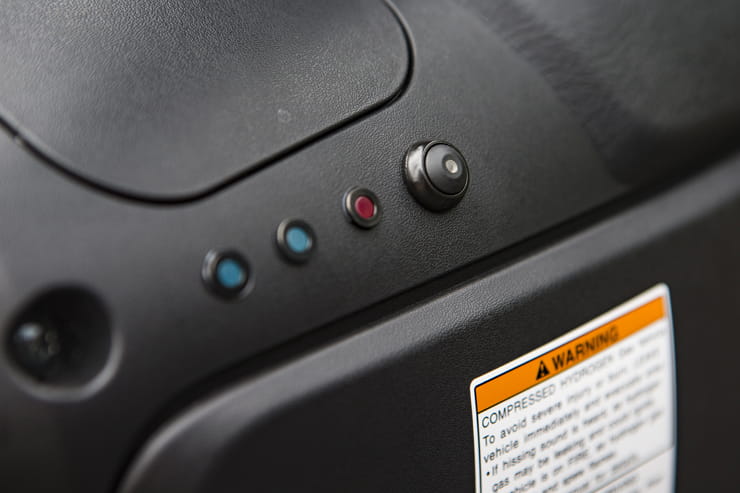 And the only by-product is water?

Yes, really. In fact the exhaust gas, which contains water vapour and the air sucked through the system will be cleaner than the air that went in because the filters remove harmful chemicals and particulates. Sitting in traffic behind a queue of fuel cell powered vehicle will be a fragrant (if slightly humid) place to be.

Yes, but most will be overcome by volume sales and investment in infrastructure. The two big unknowns in biking terms are outright longevity of the fuel cell membranes which will be determined by filter performance and being ridden in our diesel-soaked cities and how quickly a big enough network of fuelling stations can be built.

One other issue raised by a BikeSocial reader is what happens if Hydrogen really takes off and our streets are teeming with thousands of Hydrogen powered vehicles. With all that water vapour coming out of the back all day, every day, will it be like riding through a stream, in the fog? And, what happens when the roads freeze? BikeSocial asked the question and the answer is that we don’t need to worry. The amount of water vapour is minimal, it will disappear up into the atmosphere and shouldn’t be a problem. 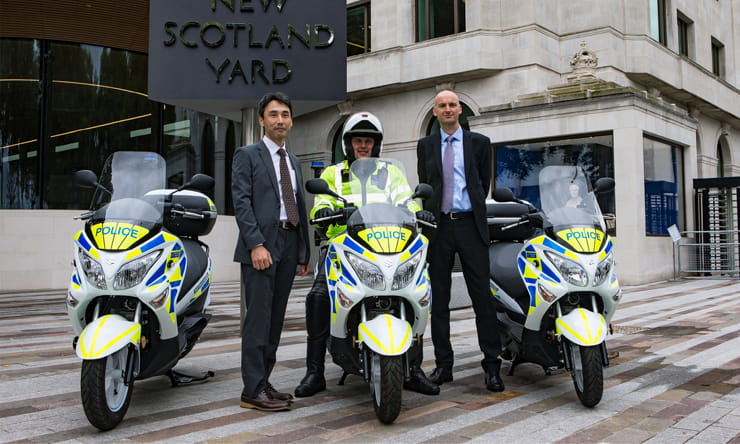