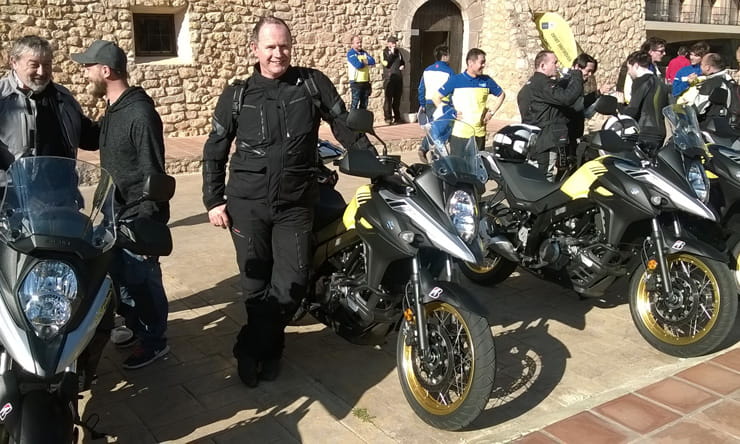 
BikeSocial’s Phil West has just been riding Suzuki’s updated 2017 V-Strom 650 at its world press launch near Barcelona, Spain. Here are his first impressions:

“We’ve just done 125km on the XT version of the new V-Strom 650 (that’s the one with the wire wheels, hand guards and belly cowling for £500 extra), along the gloriously sinuous switchbacks around Tarragona and I have to say I’m impressed with Suzuki’s newcomer.

“The main plus points are the same as they always were with the V-Strom – it’s a good, straightforward, easy to get on with bike that’s got enough pep and handling to entertain, is usefully flexible and all in a comfy, upright package. None of that’s changed.

“What IS new with this evolution is that, a bike that was being left behind by the competition and starting to look old now in Euro4 compliant, now has a tad more pep, a few extra goodies such as traction control, easy start and low rpm assist (although still no riding modes or adjustable forks) and all freshened up with new looks based on its 1000 big brother, better ergonomics (thanks to a slimmer riding position and better ‘comfort’ seat and more.)

“Don’t get me wrong: this isn’t a big leap ahead of the rest of the class. But is has caught up in most ways, has enhanced all the classic V-Strom 650 appeal of being a bike for all people and, at £7399 for the base model and £7899 for this XT, it’s still great value, too.