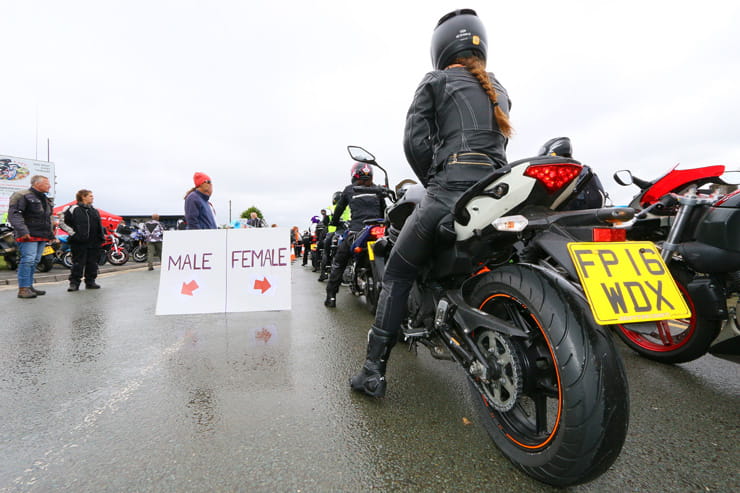 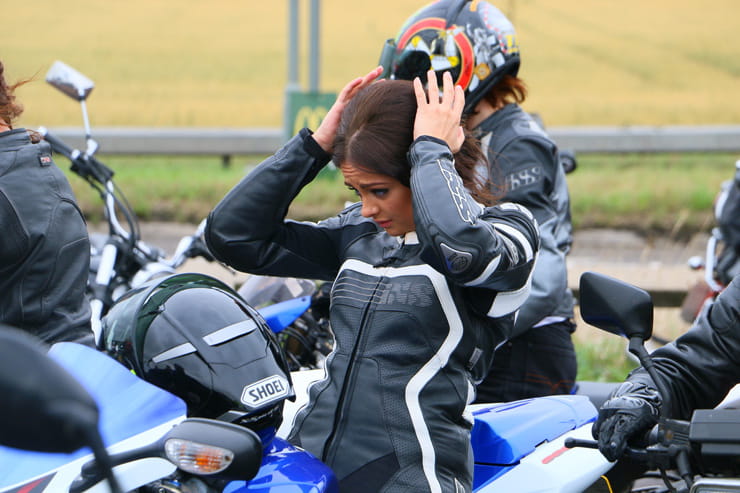 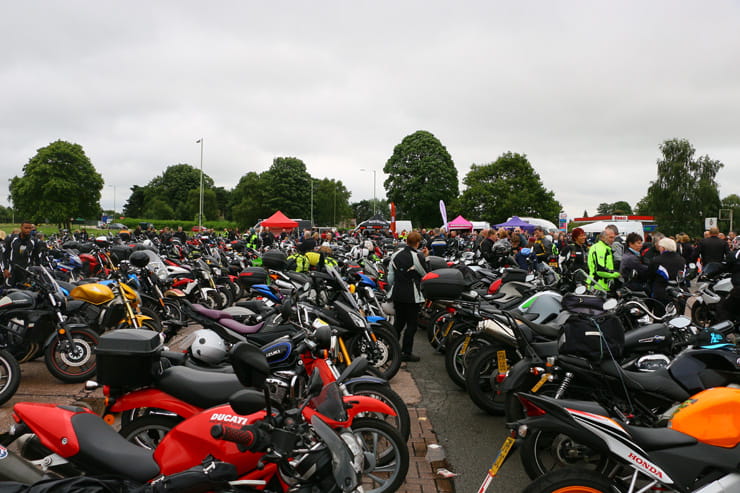 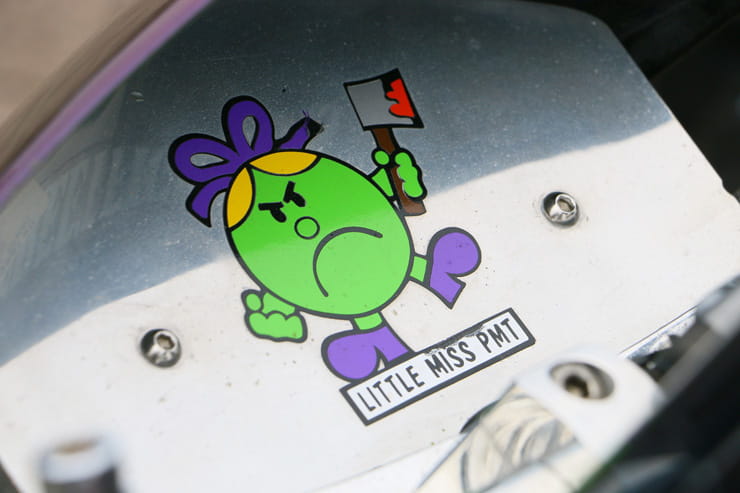 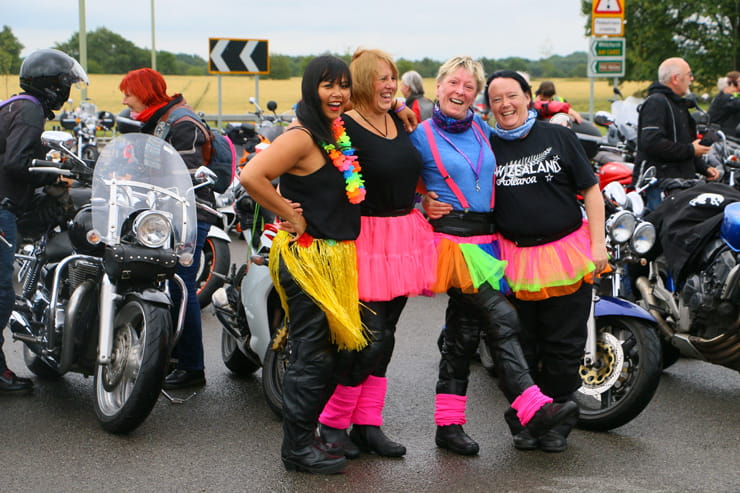 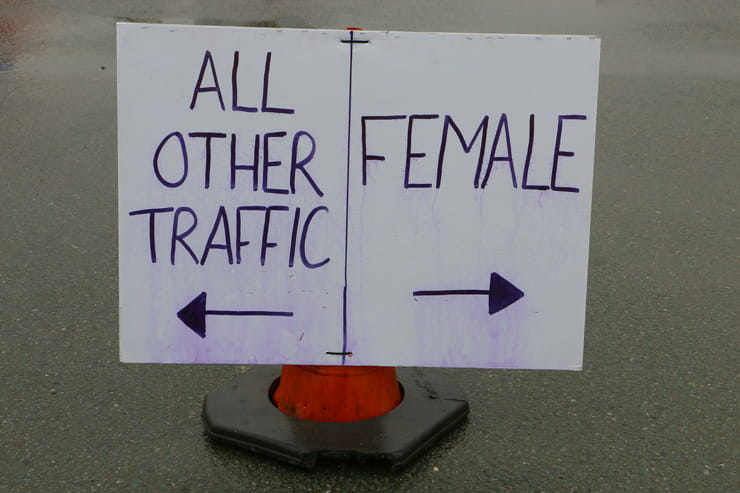 Over 1100 lady bikers have set a new world record for the largest number of all-female riders at a single bike meet in Shropshire, beating the previous record set in Australia last year. The meeting was the second record attempt run by organisers Sherrie Woolf and Nimi Patel; a previous girls-only meeting at the Ace Café in 2015 set the record at 681 riders, but last year it was comfortably broken by 1002 lady bikers in Dubbo, New South Wales.

Now the record is back in the UK after 1132 hardy women (and a few supportive men) braved the summer rain to meet at Lynn’s Raven Café, near Whitchurch close to the Welsh border. Even the wet weather couldn’t dampen the mood as a steady stream of bikes rolled in through the morning mizzle, slowly filling up the car park with a variety of machinery – everything from scooters to Harleys, sportsbikes to tourers, 1970s Moto Guzzis to 2017 FireBlades. Aside from the world record attempt, the Bennetts-sponsored event included live music, clothing stands, and a raffle with proceeds going to support the local air ambulance and Blood Bikers. 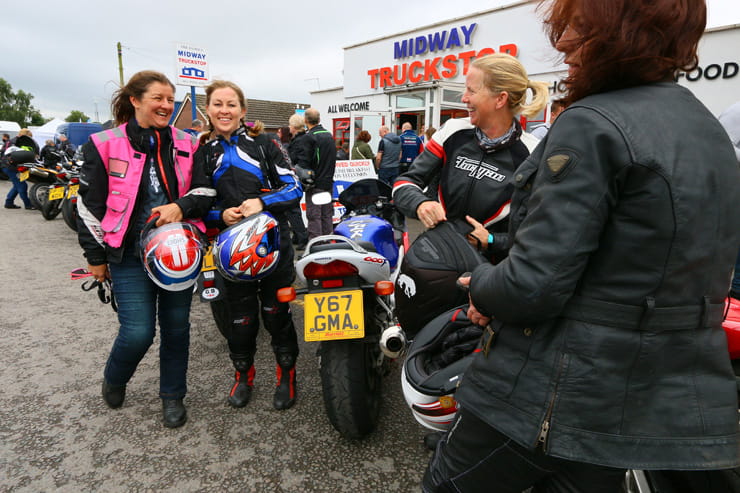 But the main aim of the day was an act of sisterly solidarity, bringing together an under-acknowledged biking minority faced with common issues and challenges in a male-dominated market – and on that level, quite apart from setting a new world record, the day was a massive success. Sherrie and Nimi are exploring the possibility of making the event an annual meeting. 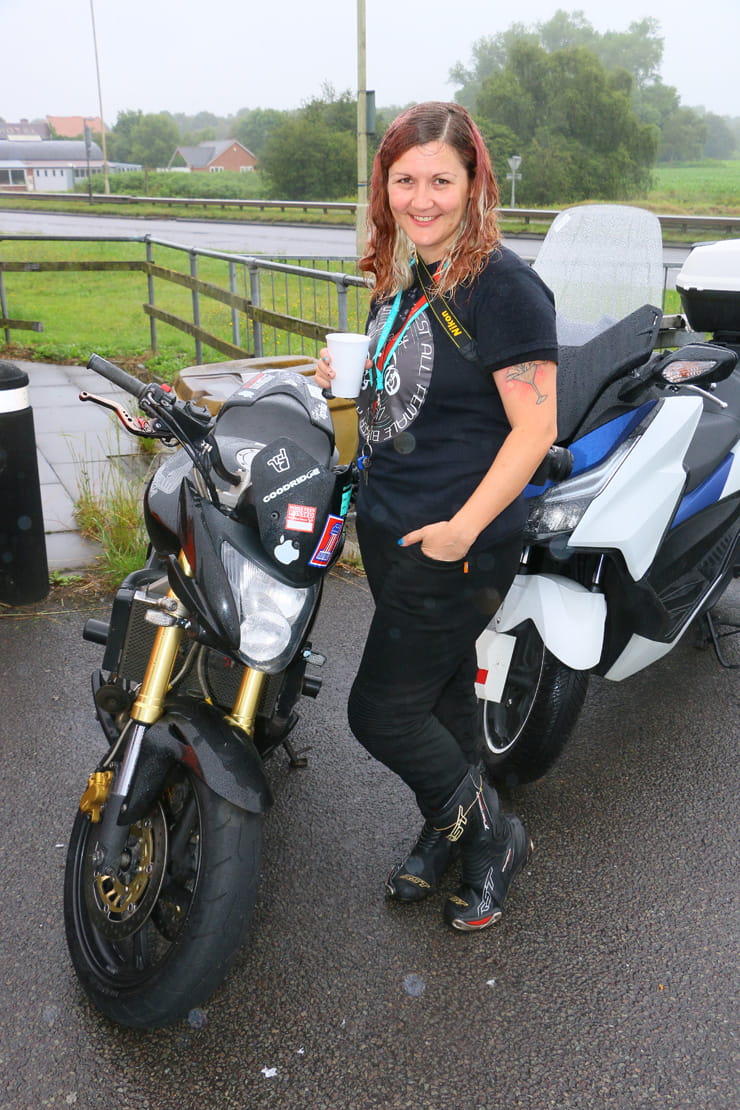 As one of the event workers, Emma rode 40 miles on her Honda CB600 Hornet to the meeting. “It’s still such a novelty,” she says of lady bikers. “So when you arrive somewhere, everyone’s watching. That puts you on edge, and then you do something silly, like drop your bike. I’ll avoid places because of that. So today is great because although we’re setting a world record it’s also that many women want to come together; it just takes that stigma away.” 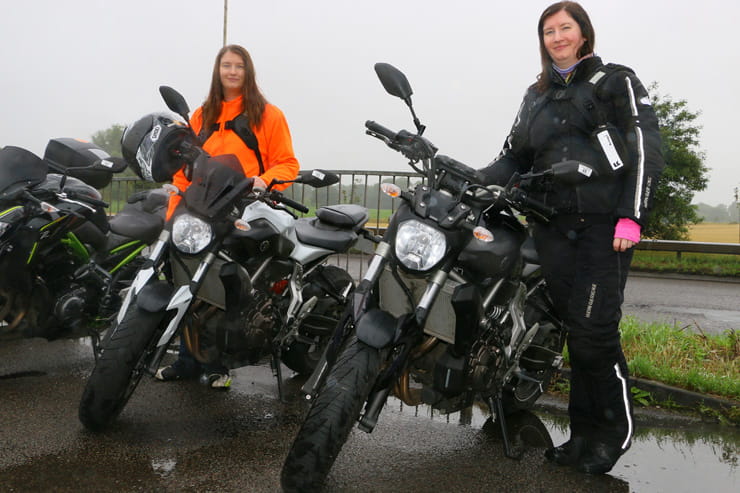 Twins Elaine and Gill rode 80 miles to be part of the record attempt on their – naturally – matching Yamaha MT-07s. One of their biggest challenges, as lady bikers, is finding the right kit: “It’s the gear,” says Elaine. “Clothing manufacturers all seem to think ‘Pink!’ and ‘Butterflies!’ and all this kind of stuff. And it’s like, we don’t want it.” “I’d much rather buy guy’s stuff,” says Gill. “And have it look a bit unflattering. Unless you’re, like, a stick-thin child, it’s not made to fit.” 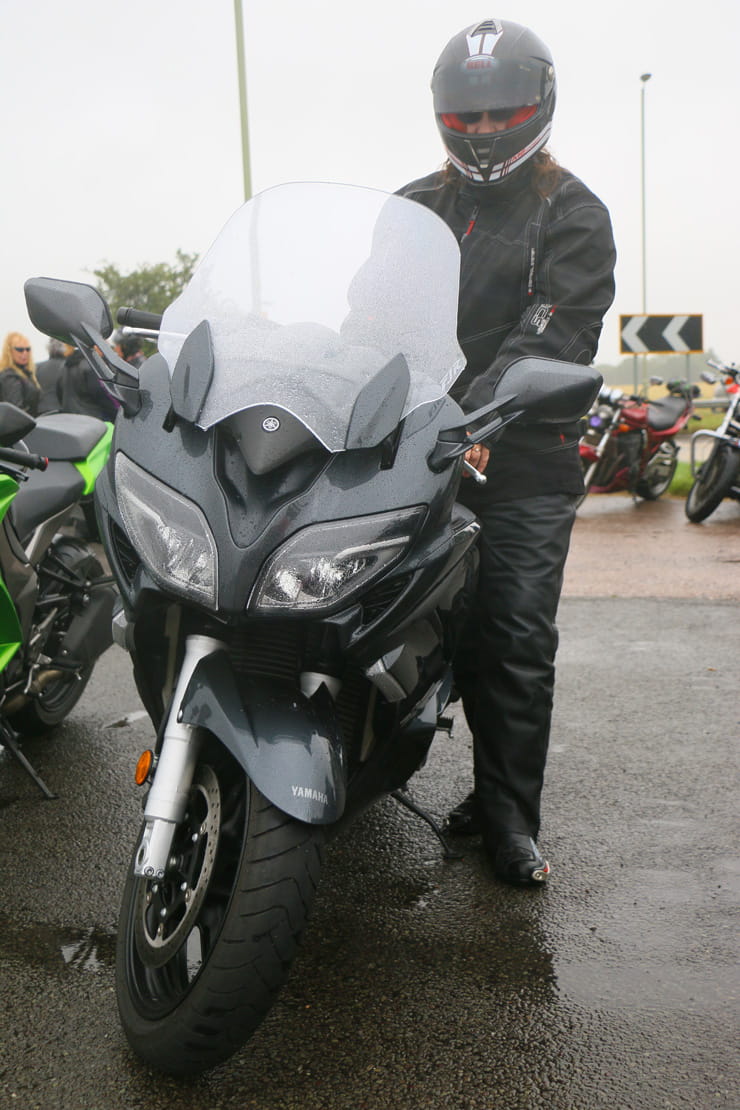 Rose has only recently bought her FJR1300 but has put 1600 miles on it already and will soon be taking off round Europe with her partner Rob. “We’ve even got tabards written in French: Just Married on the front and On Honeymoon on the back.” Flo is a big supporter of women riders: “I’ve been riding all my life but we’re still a very small percentage and there aren’t enough of us.” As a woman biker, she notices how other road users seem to have double standards: “I get cut up and sworn at as much as any other biker, but when they see it’s a lady they get manners.  Why can’t they have manners for all bikers?” 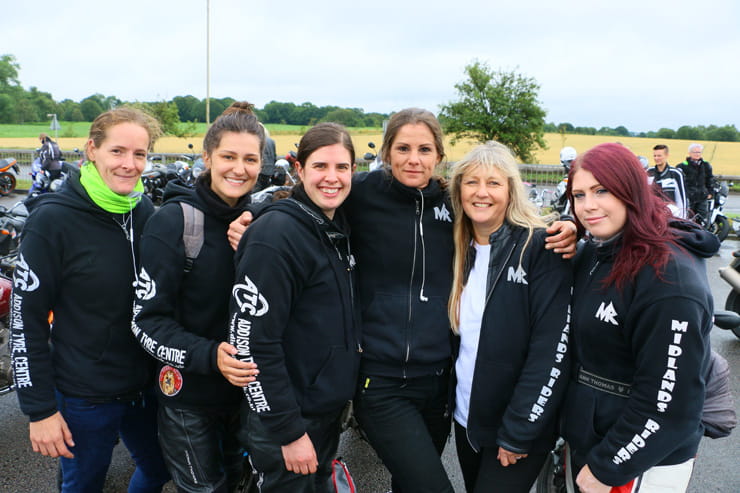 From right to left: Joanne, Di, Natalie, Natalie #2, Hannah and Nicola all ride with Midlands Riders and all face the same issues: “Finding damn trousers that fit! It’s such a male-orientated business, and women come in so many different shapes. When you walk into a shop the men’s clothing is huge but it’s like, where’s the lady’s section? And it’s a little bit in the corner.” But there are advantages too: “A lot of men are boys at heart on the bike; whereas us women, we think a little more cautiously. So statistically, we’re safer.” 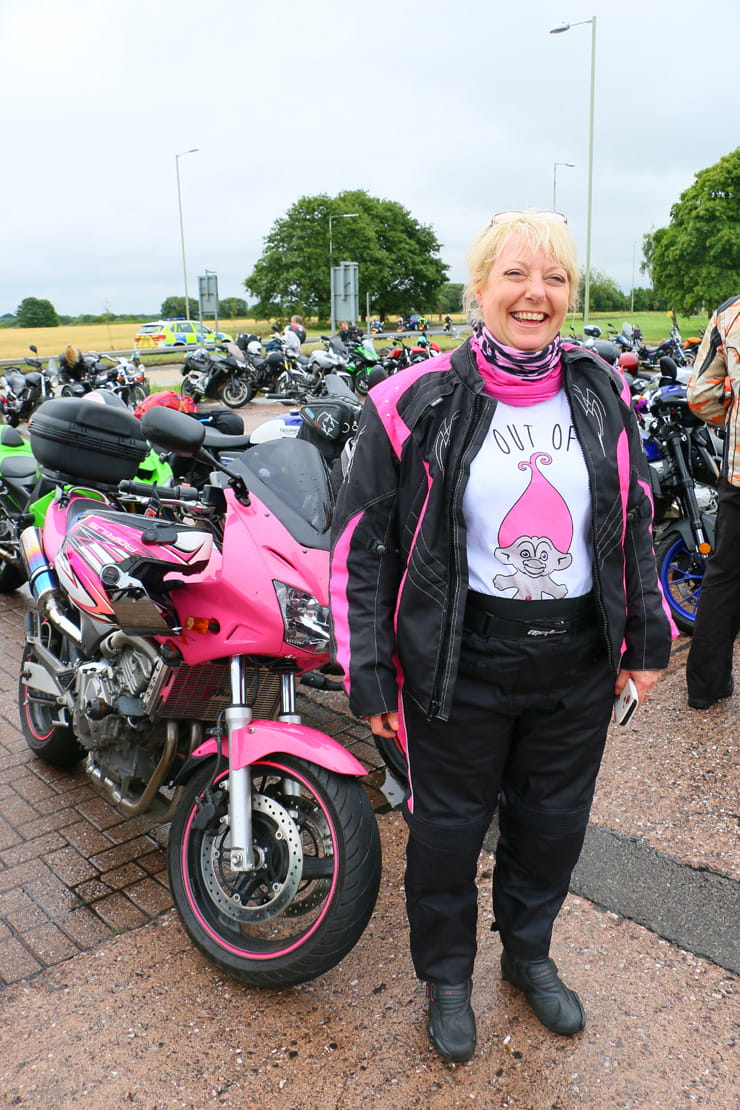 Jane left her black Bonneville at home and rode her pink Hornet 30 miles to get to the meeting. She’s been riding since September 2016, and finds attitudes to her change depending which bike she’s riding: “If I’m on the Honda, cars push me and think I want a race. But if I’m on the Bonneville they slow down more and are more understanding.” She also thinks female biker clothing needs an overhaul: “There’s hardly any choice for women. I love pink, but ladies who don’t will struggle to get something.” 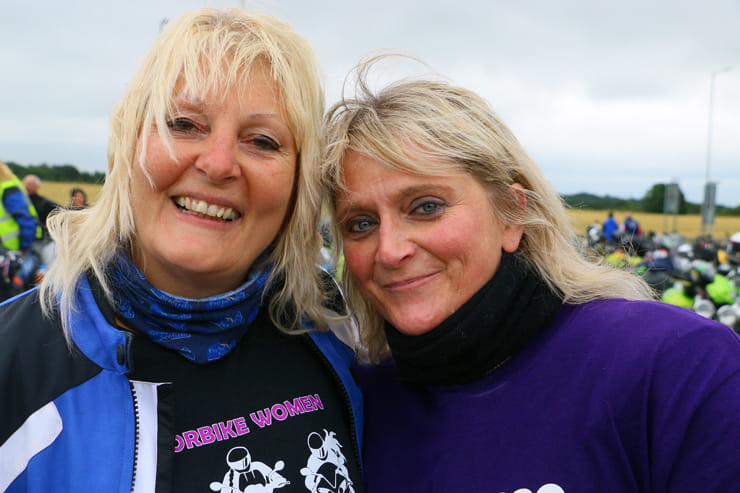 Paula (right) and Karen (left) have been riding over 30 and 40 years respectively, “...so when the marshals in the car park try and help us move our bikes about [Tiger 1050 Sport and R1200 GS]... hey, we can! But maybe that’s just manners.” Both ladies ride off-road (they’ve been trail riding as far afield as Peru), “...and sometimes men offer to ride our bikes up a big hill or something... we can ride up it perfectly well!” 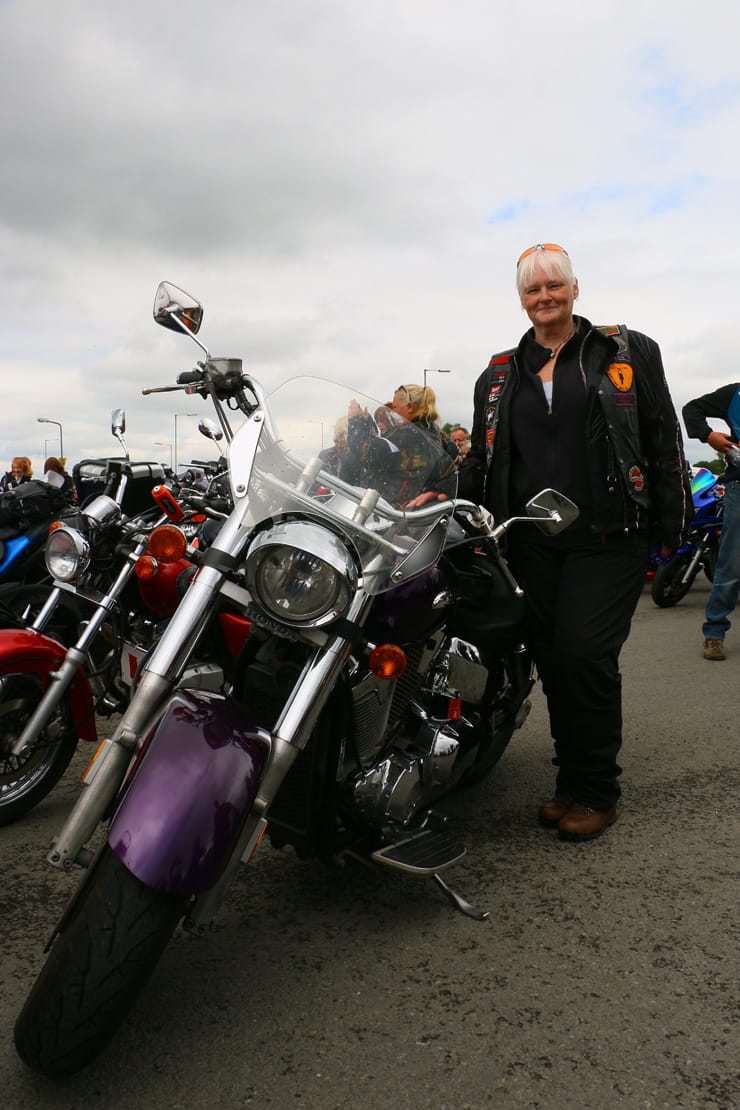 Alison and her Honda VTX1300 were the unofficial record breaker – as bike number 1008, she was the rider who took the day’s tally over the number needed to set a new world record. She’s been riding for 27 years: “Attitudes to lady bikers have definitely changed over that time,” she says. “When I started riding there were hardly any female riders and you’d get started at a lot more. Nowadays it’s more commonplace and people are less surprised. They admire the bike rather than wait for you to mess up. But finding the right kit is still a problem – most bike-wear is made for skinny women, and they don’t seem to realise how far you have to reach to the bars. It’s finding something you’re comfortable in; that’s still tricky.”

The full photo collection of the day can be found on Bennetts’ Facebook page, here.