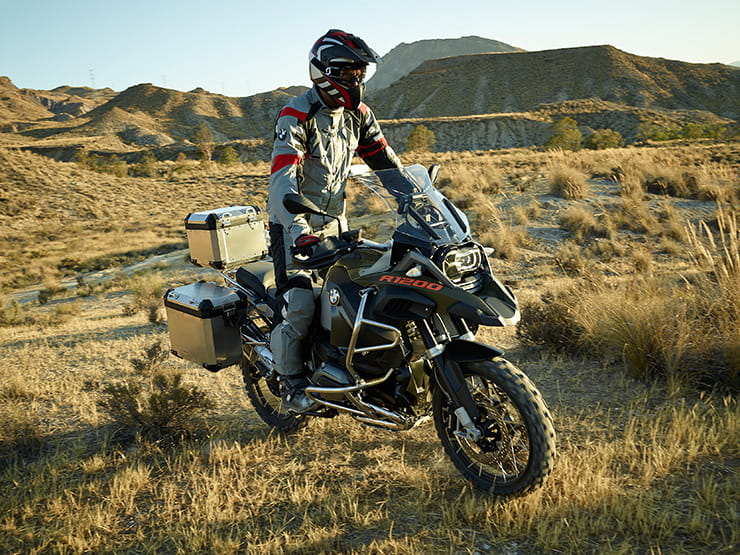 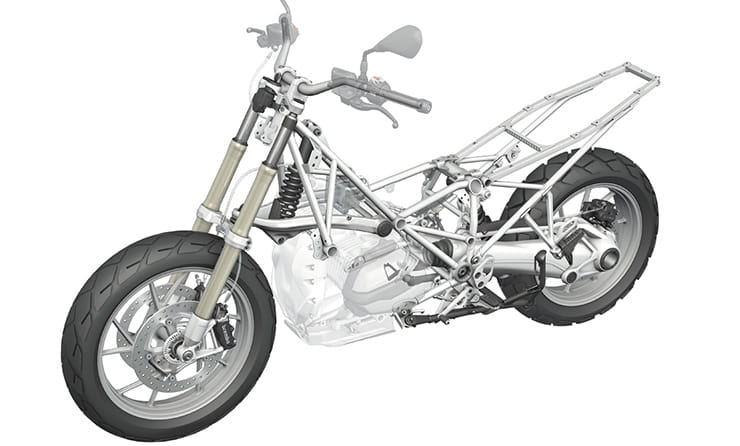 BMW Motorrad UK has issued a fork stanchion safety recall for all R1200 GS and GS Adventure models built between November 2013 and June 2017, in an escalation of BMW’s service campaign begun last week. All owners will be contacted and asked to take their bikes to a BMW dealer for the recall work.

BMW’s recall notice does not require owners stop riding immediately (unlike BMW’s 2014 R1200RT rear suspension recall) and, despite the nature of the problem potentially leading to a catastrophic failure of the forks and the front of the bike collapsing while being ridden, it suggests BMW is confident there’s little or no risk of imminent danger.

“There have been no warranty claims in the UK [from GS or GS Adventure] customers,” said BMW’s spokesperson.

The R1200 GS, on sale in its current guise since early 2013, is not just Britain’s most popular bike, but the best selling BMW worldwide: last year BMW sold over 25,000 GSs, nearly 20% of their overall sales, and the GS Adventure added another 21,000. Total sales of all affected bikes stands at around 168,500 units. 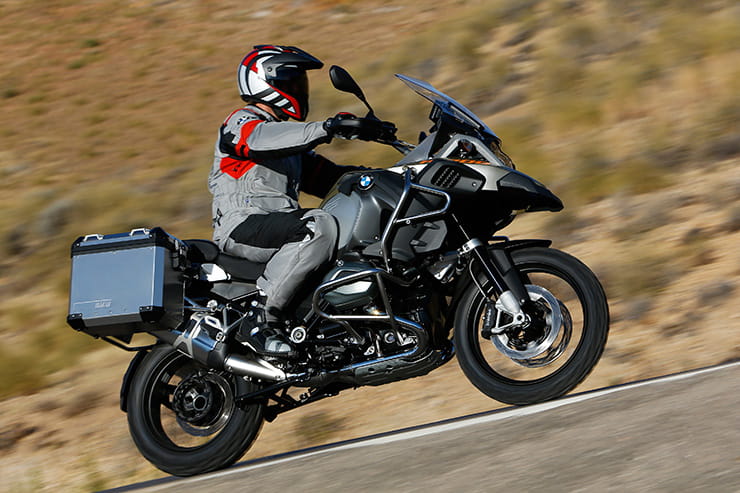 BMW’s recall notice is specific about the details of the issue, saying that “unusual incidents with momentary high stress” – in other words, very big bumps – can cause the press-fitted fork stanchion ‘plug’ (that locates in a rubber bush in the top yoke) to generate play between itself and the top of the stanchion tube – presumably as repeated shocks stress the plug either from side to side or up and down.

It’s a bit like wedging a metal bung in a vacuum cleaner tube, then repeatedly hitting it with a hammer. The tube will spread and expand around the bung, and eventually the bung will come loose. When that happens to a fork stanchion, the front of the bike will collapse with a loss of steering, suspension and control. 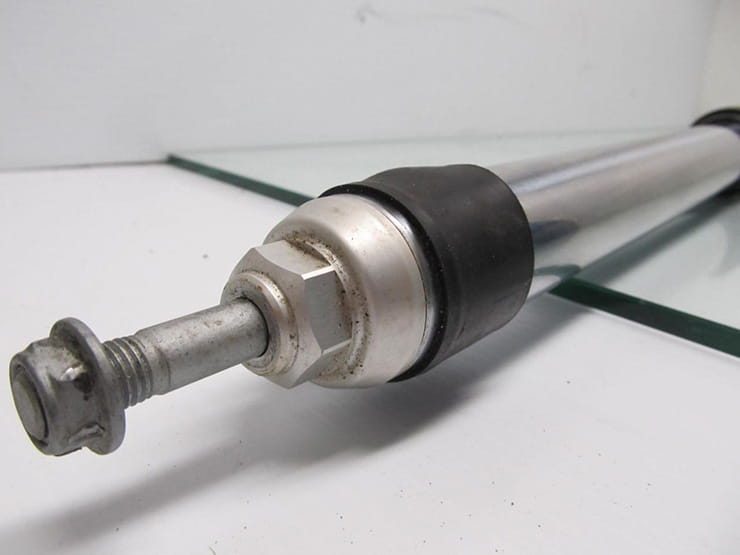 Can I tell if I have a problem?

Depends who you ask. According to BMW’s recall notice, “...preliminary damage to the fixed fork tube manifests itself through a gap between the pipe and the pressed-in, top seal plugs.”

What it doesn’t say is this gap is a) shrouded by a rubber sleeve and b) is out of spec when it’s only around 0.2mm – so you need a feeler gauge to measure it.
BMW go on to say, “...the gap may increase through longer, high-stress usage. This may lead to oil leaks and noise. If these signals are not perceived, or are ignored, and further high-stress incidents occur, the plug may become completely loose.”

BikeSocial has spoken to several GS owners and expert GS riders who say if you aren’t specifically listening and feeling for the problem, you’re unlikely to notice it until either nothing happens or your forks fall off. 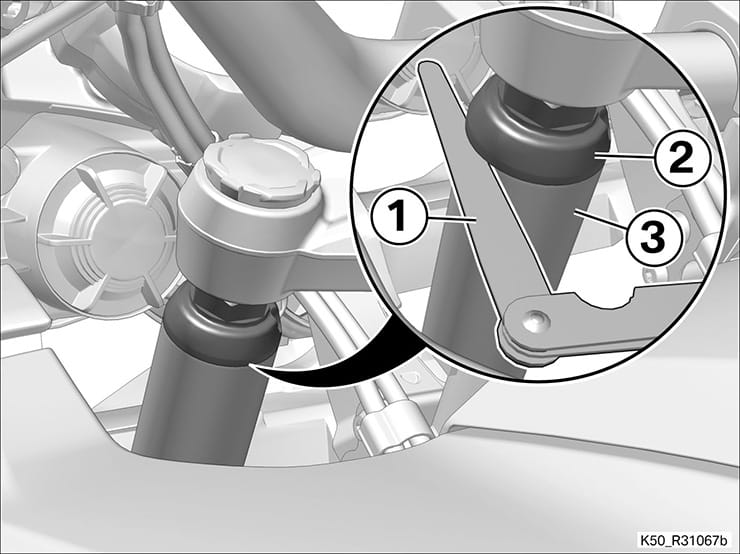 First, your dealer will measure for wear or play between the alloy insert plug at the top of the stanchion and the fork tube. If there is none, a special tool press-fits a reinforcing steel sleeve over the stanchion top, with the idea of effectively preventing any wear and build-up of play.

If either fork legs are showing signs of wear, the both legs will be replaced with a pair that already have the steel sleeves fitted.

No. Only GS and GS Adventures built after November 2013 to date are affected.

BMW have been asked by BikeSocial for an official explanation; as soon as we have it, we’ll publish it.

In the meantime, finding out why early GSs are unaffected is a matter of deduction and speculation. The R1200 GS was launched at the start of 2013. By November 2013, a series of revisions were made to the bike to coincide with the launch of the Adventure model. Among these was the addition of a steering damper.

The damper was added, at least unofficially, to address concerns the GS could suffer issues with straight line stability – which themselves followed on the heels of the tragic death of respected journalist Kevin Ash during the bike’s launch, and subsequent stories – some verified with snapped lock-stops – of unexpected and unexplained tank slappers.

But other changes were made too. Comparisons of part numbers between the early 2013 bikes and later bikes show the fork inners and outers, top and bottom yokes, rear shock and rear torque arm strut are all different specification.

It seems logical, via a process of elimination, that the current fork problem is most likely to be an unforeseen consequence related to these changes rather than an issue with a change of materials or a design flaw.

For example, one idea behind the GS’ Telelever concept was originally to maintain steering geometry during braking. The degree to which it does this (or not; some dive is desirable for ‘feel’) can be adjusted according to the geometry of the wishbone or ‘front swingarm’.

But Telelever also decouples suspension forces and steering – bump forces are fed into the chassis via the wishbone, leaving the handlebars free to do only the steering. That’s why the GS doesn’t need a heavily braced headstock at the steering stem, unlike a conventionally forked bike. And it’s also why the GS’ forks don’t need to be rigidly clamped in a deep top yoke but instead locate via a short rod into rubber bushes in the yoke.

But if, say, BMW fit a stronger spring to the rear shock or alter its length to stabilise the bike, or reengineer the front end to accommodate a steering damper, it’s plausible to imagine even a slight increase in suspension force transmitted into the steering could, over time, lead to unexpected wear in that area. 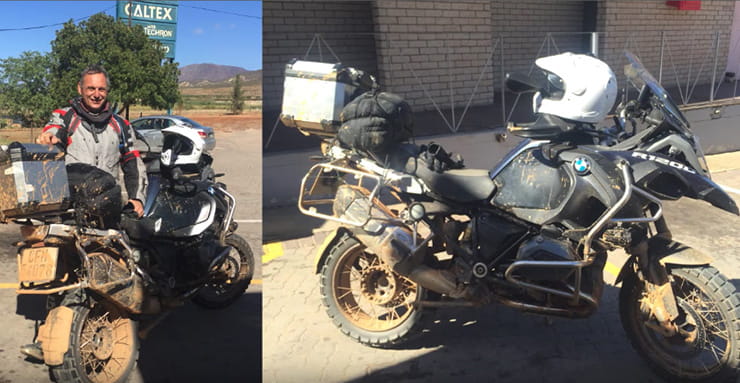 But that was over two years ago. Wouldn’t BMW be aware of it before now?

They were. In December 2015 South African Tony Georgiou, 59, bought a new BMW R1200 GS Adventure. Six months and 8500 miles later he was riding off-road along a gravel trail, travelling at around 28mph, when – in his words – “the front of my bike collapsed and I hit the ground heavily.” From the resulting loss of control and crash, Mr Georgiou was hospitalised with his injuries.

A rider ahead of Mr Georgiou (also on a GS) was filming the ride and the ruts across the trail that triggered his front end failure can clearly be seen.

A cursory investigation showed the fork stanchions had separated from the top yoke insert. After inspection by his dealer in South Africa, the damaged front end of Mr Georgiou’s bike was returned to BMW in Germany for examination in October 2016.

It wasn’t until June this year Mr Georgiou got a reply, from BMW South Africa, which he says concluded “...that the stanchion separation was as a result of an impact and that it had nothing to do with the design or manufacture of the front forks.”

Mr Georgiou didn’t settle for that, believed BMW were negligent in admitting liability, and began a campaign to alert other GS owners to the potential failure. His actions led first to a local recall, then a global ‘safety campaign’, and finally this full-scale recall.

There have been other anecdotal incidents, including one alleged crash in Portugal in identical circumstances. A Facebook group has been set up, and stories of other failures are emerging. There have also been off-the-record acknowledgments by sources within the industry that fork separation has long been a significant issue requiring routine maintenance and monitoring on GSs used for off-road schools. One even went so far as to say, “Knowing what I know and having seen some of these bikes, I wouldn’t brake hard into a hairpin. It’s a scandal BMW haven’t addressed this long ago.” 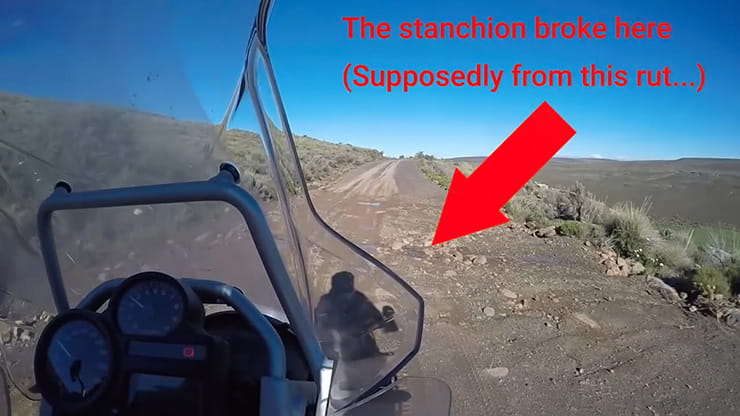 So why didn’t BMW do something sooner?

They probably should have if only for safety’s sake – but also, from a PR perspective, the current recall looks like a belated reaction to customer pressure rather than a proactive step.

And it’s not as if BMW don’t have a track record of acting quickly and decisively when they need to issue a safety recall – and they also have a reputation for excellent customer service.

But when a problem such as this crops up certain procedures will be followed: identify the issue, determine if it’s user-related, determine the likelihood of it being an isolated case or indicative of a larger problem, engineer and test a counter-measure, and develop a strategy for communicating it and acting on it. None of this happens overnight. 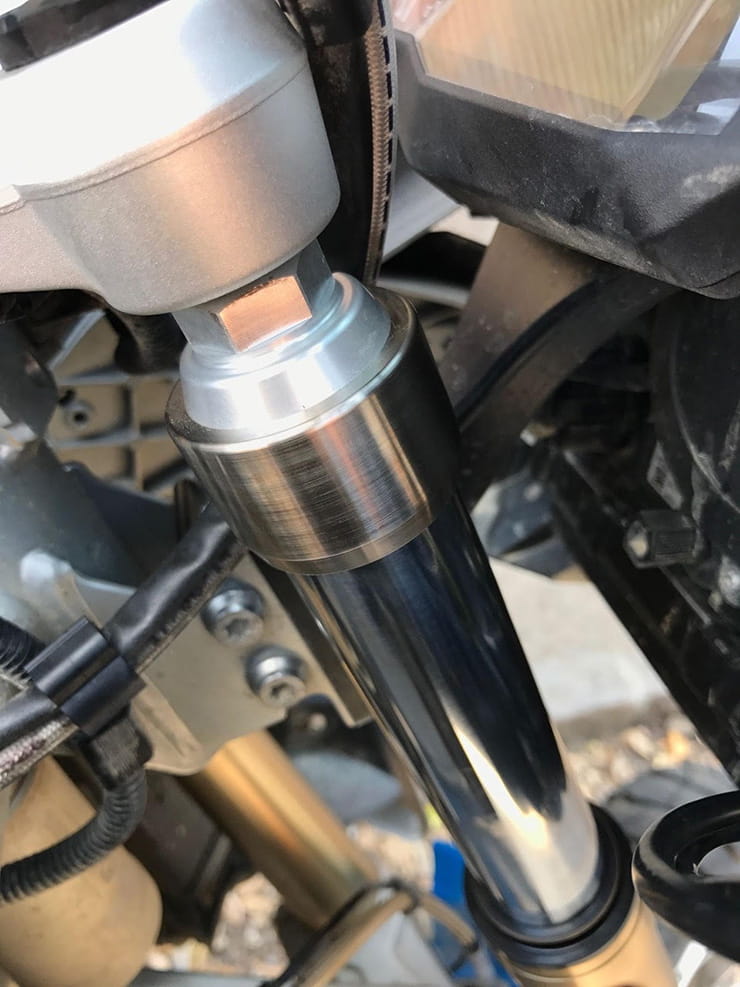 Should I feel safe now I’ve had the fork mod?

BikeSocial reader Toby Mears owns an affected R1200 GS and despite initial concerns, is now happy with his bike.
“My bike had gaps bigger than 0.2mm at the fork tops,” he says. “It was a little scary to think what could have happened, especially considering how I had been using it only weeks before [off-road at the GS Trophy in Wales]. But, on the other hand, knowing how I had been using it, it didn’t fail. What I don’t know is if the gaps were there before I started using it off road or if they developed as a result of using it off road.”

But having seen BMW’s modification, Toby is reassured: “The addition of the steel sleeve, which is quite chunky, would offer a lot of support and strength to prevent the top of the stanchion deforming. I feel better having thought it through. I think the fix is good.”

Here is an excellent video by BMW dealer Riders of Cardiff, showing exactly what the problem is, and the recall work: https://youtu.be/EXGJkOG-5P0

Have you been affected by the R1200 GS and Adventure fork issue? What do you think of BMW’s response? Are you happy with the fix? Let us know below.

As part of a safety recall, BMW Motorrad is checking the fixed fork tubes R 1200 GS and R 1200 GS Adventure motorcycles from the production period November 2013 to June 2017.

BMW Motorrad has determined during ongoing field observations that the fixed fork tube of the specified models can suffer damage, due to unusual incidents with momentary high stress, without the user noticing. Potential preliminary damage to the fixed fork tube manifests itself through a gap between the pipe and the pressed-in, top seal plugs.

If the fit of the pressed-in seal plug has loosened, the gap may increase through longer, high-stress usage. This may lead to oil leaks and noise. If these signals are not perceived, or are ignored, and further high-stress incidents occur, the plug may become completely loose. Subsequently, critical driving conditions cannot be ruled out.

BMW Motorrad has therefore decided to recall all motorcycles that could be affected to retrofit the fixed fork tube bushes. The owners of these motorcycles will be informed by BMW Motorrad. The safety recall is carried out for free for the customer at approved BMW Motorrad service centres.