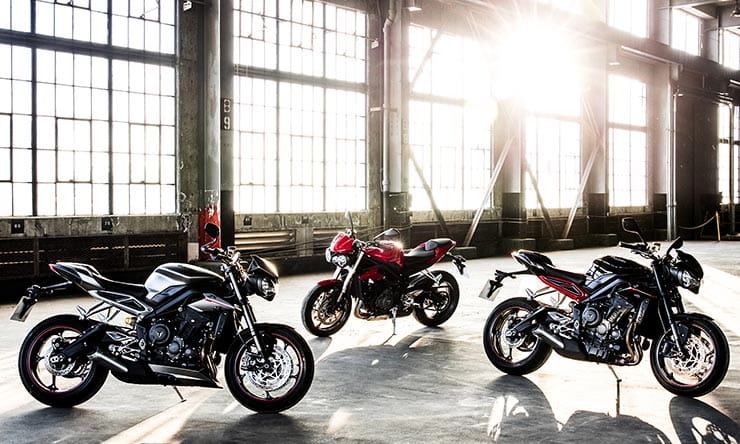 Last night, in a glitzy gig at London’s Olympic Park, Triumph unveiled not one, but three versions of it’s new 765cc Street Triple.

Actually, scrub that, the Brits are bringing out FIVE variants of the Street. Last night we brought you the first pics and full specs, but it’s complicated stuff and to make sense of it all, BikeSocial met with some of the people behind the project to bring you an overview of the various different specs for what is likely to be the company’s biggest selling bike in 2017.

The base model, which we know will have an on the road price of £8000 when it goes on sale in April. It’s powered by a 111bhp version of the new 765cc engine and features basic Showa suspension and Nissin sliding piston caliper brakes. The instrumentation is also more basic than the upspecced models, being based on that of the outgoing Street Triple, and there’s a softer ‘Rain’ mode alongside the default ‘Road’. Seat height is lower than higher spec versions, at 810mm, and it comes in red or black colour options.

We expect this to be the most popular sight on British roads, taking the base S version and adding on some pretty serious spec for a middleweight. This has got Triumph’s gorgeous 5” TFT dash (which can be adjusted for angle) and power is up 5bhp, to 116bhp, and the R engine features a slipper clutch and a different crankshaft to the base model. There are also two additional power modes, ‘Sport’ and the programmable ‘Rider’ but the main differences are in the chassis. Up front, Showa Big Piston Forks (BPF) are fully adjustable and there’s a good spec Showa piggyback monoshock out back. Geometry is also sharpened up, with less rake and trail than the base model. Stopping power comes from Brembo’s M4.32 four-piston radial monoblocs and the seat is also 15mm higher on the R version. It’ll go on sale in May, but price is to be confirmed. Colours are black, metallic silver or white, with a red subframe and neat detail stitching on the seat. Oh, and the headlights are brighter…

Daddy of the Streets, the top spec RS version will be the first to go on sale, landing in showrooms in March. It boasts 121bhp and sprouts a quickshifter and yet another riding mode in ‘Track’. It’s got the highest specification BPF forks and an Öhlins STX40 rear shock, range topping Brembo M50 four-piston radial calipers and Pirelli’s brilliant SuperCorsa SC tyres, which ties in with Triumph’s description of the RS as a potential track bike. Colours are metallic black or matt silver.

Triumph is bringing out an A2 compliant version of the base Street Triple, but rather than use the new 765 motor, it uses a destroked 660cc version of the previous 675 engine that previously saw action in Australian learner legal ‘LAMS’ versions of the outgoing model. It’s going on sale in June.

It’s a mark of how important the Street Triple range is when it comes to bringing new riders into the Triumph range that the company has devoted significant resource to developing a separate version for shorter riders. In addition to having resculptured seat padding, the low version has different specification front and rear suspension that is shorter and that will make it 30mm lower than the already pretty accessible R, at 795mm. The low version will feature slightly softer geometry and a bit less ground clearance at extreme lean angles, although full specs won’t be available until closer to this variant’s launch in August.

All about the performance

Triumph’s legendary Daytona 675 motor has been used as the base for the new Euro4 compliant 765cc engine, with a bigger bore and stroke (78 x 53.4 mm) and most of the internals changed, including the crankshaft, pistons, conrods and barrels.

The 765cc capacity was chosen as it is the maximum that Triumph’s designers could reach without making the engine bigger and heavier. Speaking at the launch Stuart Wood, Triumph’s Chief Engineer, told BikeSocial: “The Street Triple has been really well loved. We’ve built 50,000 over the years and the bike, like the market, is going to evolve. Euro4 exists and we need to comply, but we always try to make a point of embracing things like that and doing a thorough job. Euro4 hasn’t been the main driver for the new bike, but obviously it has been a part of it. The main driver has been to get more performance and by that I don’t just mean more power.

“We wanted more torque, and the larger engine capacity that would give us that torque. We were going to go to ride by wire, which helps with Euro4 but also gives us better response, so really it was about evolving the 675 motor and the best platform upon which to do that was to start working with the latest evolution of the Daytona 675 engine and to take that as far as we could ,without increasing the package size. In fact, we’ve actually reduced weight.

“The bike is still lightest in class. It has always been agile and we wanted to keep that. It wasn’t about getting a bigger bike, it was about getting more performance.

“It’s also all about choice. We can optimise bikes to do certain things and different people want different things. We may find that the R, for example, becomes the best seller, but that doesn’t mean that someone doesn’t really want an S and really love it, and it is definitely the case that someone will want the low seat height version, which isn’t just a lower seat, or even retuned suspension. We have put a lot of effort into the unit (suspension) to make it shorter. The Street Triple is the first big bike for many people, who have maybe just been riding for a few years, and there are people who are less confident or physically need a lower seat, and this just makes it more accessible and anything we can do to help their confidence will allow them to explore the bike more and give them a better ride.”

The first of the 2017 Street Triples will be in showrooms from March, with BikeSocial’s first review coming next month.

After spending 2016 cleaning up in Retroville, the new Street Triples see Triumph getting back in the ring with the big boys – bringing along a bike that looks set to give Yamaha’s incredible value MT-09 a run for its money.

I’m pleased to see the Hinckley crew launch a bike that’s not aimed at trendy London types with graffitied arms and hipster beards, but a good, honest middleweight that should ride as well as anything else in the class.

With fewer and fewer niches to be filled by the classically styled parallel twins, let’s hope that the new Street marks a return to bringing in some brilliant new models for the core Triumph customer, the guys who love the character of the three cylinder engine and no nonsense engineering. There are loads of versions, which is confusing, but it should mean that there's something for everyone. I'd also be very surprised if we don't see some kind of semi-faired 'Tracer' type of triple in the future. The market appears to be crying out for one!

Personally I'm a bit underwhelmed by the styling. Triumph are the kings of hyperbole and spent the evening throwing out superlatives about their new baby. I'm sure that this bike is going to kick butt and take numbers but, if it is the gamechanger they claim it to be, I can't help but wish that it had a bit of an edgier look to it. The headlights are always going to polarise opinion, but I'm thinking that it all looks a bit on the safe side.

As the former owner of several Street Triples, this is definitely the one new bike that I am looking forward to riding more than any other this year. The technology is right at the cutting edge and with rumours suggesting that a version of the new Street Triple engine could be adopted as the spec motor for the Moto2 class, as well as a new 1175cc superbike engine, it looks like we are at the start of another golden era for this grand old British brand.