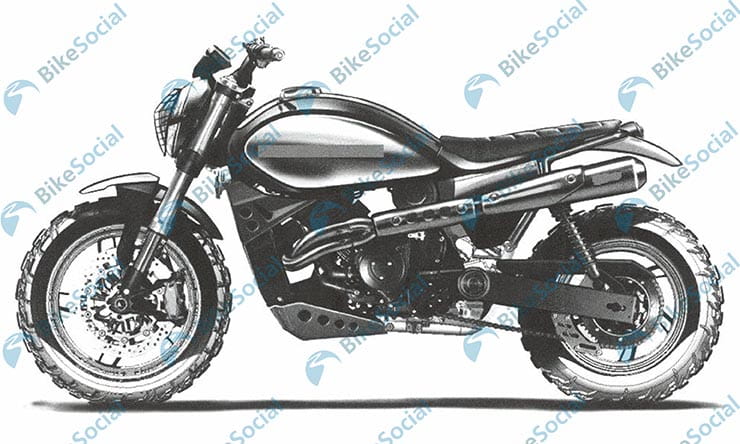 Moto Parilla might not be a familiar name yet, but it’s a London-based firm that’s hoping to disrupt the bike market by combining Italian engineering and styling with low-cost outsourced production to create surprisingly cheap and attractive bikes.

Back in September we broke the news of Moto Parilla’s intention to bring the Brutus 750 concept bike to production under the name SUV750. That machine, distinguished by its 750cc twist-and-go engine and massive, oversized tyres, first appeared at bike shows under the Brutus name back in 2012. It reappeared a year later, bizarrely badged as a Caterham. The tiny British car firm intended to expand into bikes and even backed a Moto2 effort in 2014, and the big-tyred 750 was to be its headline-grabbing first production model. However, after a brief flurry of publicity the idea was quietly dropped.

Moto Parilla has since stepped into the breach. It intends to fund the bike’s development with a Kickstarter campaign and plans to offer it at a low $5500 to early backers. The firm has already successfully funded a new electric bicycle – also originally part of Caterham’s plan – in the same way.

The common theme between the original Brutus, Caterham’s machines and Moto Parilla is designer Alessandro Tartarini, who previous mainstream credits include the Italjet Formula and Italjet Dragster scooters.

And that’s where this new design comes into the story. Revealed in a recently-published patent document it shows a sketch by Tartarini that’s clearly a further development of the Moto Parilla SUV750 theme, but one that eschews the crazy looks and oversized tyres for a retro scrambler style that’s more conventionally appealing. As well as aiding its sales prospects, the new design’s sensibly-sized tyres should add up to improved handling. It’s hard to imagine that the Brutus 750, which uses Maxxis Bighorn rubber from a quad bike, will be the nimblest of machines.

The chassis and engine appear to be similar to the SUV750, but while that machine boldly shows off its frame – a massive oval-section tube that runs above the engine and doubles as a fuel tank – the scrambler is subtler. The frame section, while appearing to be similar in concept, is largely hidden by the bodywork and a conventional-looking fuel tank.

It also drops the high-mounted monoshock rear suspension in favour of twin shocks. That removes the need for the SUV750’s upper swingarm brace and shock mount, but the main box-section of the swingarm is unaltered. To suit the twin shocks, the scrambler also gets a new subframe incorporating upper suspension mounts.

In terms of styling, the new design ticks all the retro scrambler boxes. High-level exhaust on one side, a flat, thin seat and a classically-styled tank, plus a modernised take on the stone grill-covered headlight. The tank is probably only a plastic cover, though, if the bike retains the SUV’s fuel-in-frame thinking.

The age of the original Brutus/SUV750 design is partly revealed in its small, axially-mounted front brakes. The newer style is more up-to-date with radial-mount calipers, while the larger-diameter, narrower front wheel means it can also use much larger discs.

The engine itself looks near-identical to the SUV750’s. That means it’s the 750cc single from a Quadzilla RS8 quad, complete with the same twist-and-go CVT transmission. Performance, with 45bhp, won’t be spectacular but there should be plenty of torque. Moto Parilla’s claim for the SUV750 is that it will be much easier to ride than a conventional off-road bike thanks to the combination of plentiful torque, low revs and CVT. The same attributes should also apply to this new design.

At the moment, the Kickstarter campaign for the SUV750 has yet to be started, so any follow-up machine like the scrambler seen here is likely to still be quite some way off. If the SUV750’s Kickstarter is successful, Moto Parilla intends to outsource all the production, probably to Chinese factories, rather than having production facilities of its own. It’s an unusual concept for motorcycles, but one that’s already common for other products. Presumably the scrambler seen here, should it reach production, will be made the same way.

Having said that, the design itself remains the property of Alessandro Tartarini so there’s a possibility that it will eventually appear under a totally different name. Given that the Brutus/Caterham/Moto Parilla SUV750 has already turned up under three brands, it’s less unlikely than it sounds.