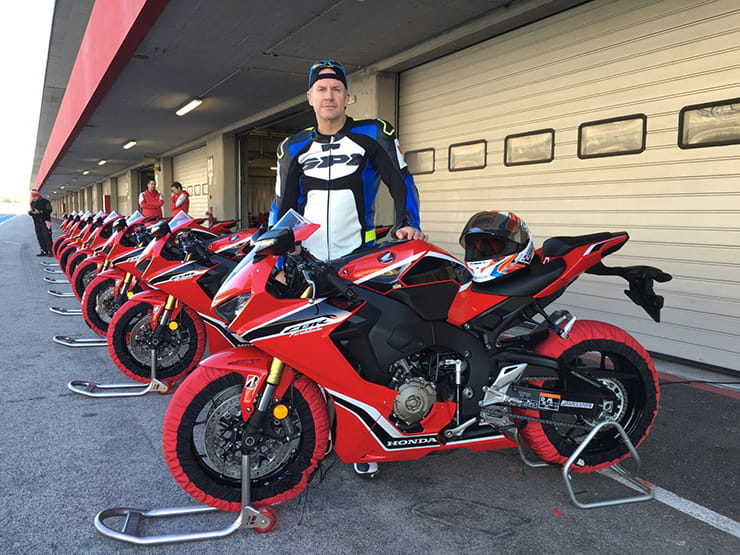 We’re here in Portimao, the rolling and fast Portuguese circuit where Honda have invited the world’s motorcycling press to ride their 2017 Fireblade for the first time.

Joining us are a host of familiar faces who are also taking the opportunity to ride the bike for the first time including 23-times TT winner John McGuinness, ‘Fast’ Freddie Spencer, Steve Plater plus BSB stars Dan Linfoot, Jason O’Halloran and Jenny Tinmouth.

Last night, Honda confirmed the prices of the long awaited new bike at £15,225 for the standard CBR1000RR and £19,125 for the SP. Both bikes will be available in UK dealerships around the end of February/beginning of March. Meanwhile, the SP2 race bike will be limited to just 500 with production commencing on March.

So, our man Kane Dalton, a former Manx Grand Prix racer, is in Portugal for BikeSocial and he’s already been out on the RR this morning with a handful of sessions on the SP model coming this afternoon. His full review of the two bikes will be up later but he’s just called in with this update:

“I have just been out on track for my first session riding the new Fireblade CBR1000RR riding with the legendary Freddie Spencer showing us the lines.

The first thing I noticed was the Honda Racing paint scheme. The carbon pattern insets and gold striping interwoven into the Tricolour paint mark the Fireblade SP’s difference. I have been riding the Red base model.

I was expecting the new bike to look radically different from last years’ machine, much like the change the ‘blade had in 2008. The new bikes have not had a significant change in terms of its silhouette this year though it does have a more minimal and dynamic design.

The biggest change comes from the new power to weight ratio and new electronics package.

As soon as you sling your leg over the bike the first thing you notice is that it feels more compact, the bars are closer and the bikes dimensions are certainly more 600-like. The new digital dash is trick and really stands out, marking this new Honda as a serious upgrade.

The new bike is lighter, narrower and shorter than previous models. To sit on it’s all ‘Blade and all good. The same comfortable but sports biased riding position, its has more compact proportions and the upper and middle fairing surfaces have been reduced. The knee grip area is also slightly slimmer. The power delivery is Honda smooth and predictable with a good mid range and higher rev peak. The power increase makes the bike feel closer to race performance – even though I’ve only ridden the base model so far. The new standard suspension, lightened weight and distribution transforms the bike handling inspires confidence. As soon as I left pit lane I was surprised at just how quick the bikes drops on its side in and out of turns.

The brakes are much better and bike feels stable under hard braking. A few times braking hard downhill into a bend I felt the ABS helping me out. The new bike is fast, seriously! And the new sound form the all new titanium muffler is awesome.”

Much more later on. 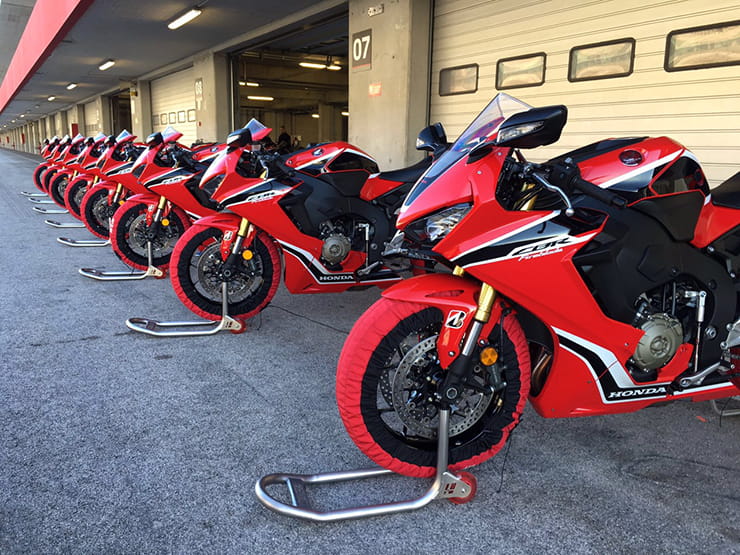