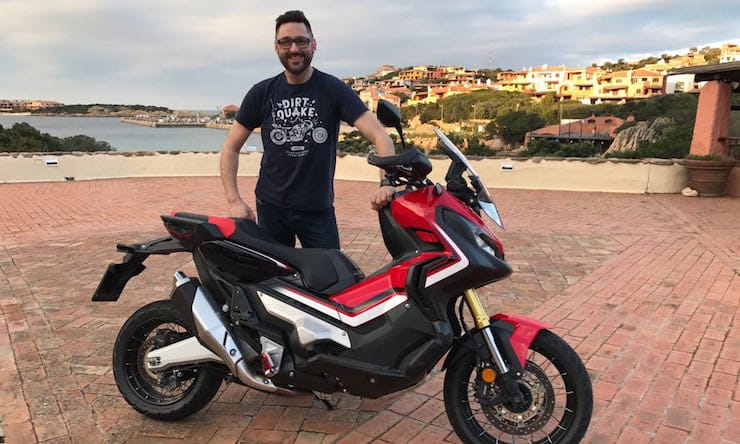 Just to prove there are still types of motorcycles that hadn’t been invented, Honda has created the adventure scooter. Never one to shy away from a niche, the Honda X-ADV is a 745cc twin cylinder crossover somewhere between an Africa Twin’s adventure style, and a scooter, with a touch of off-road ability thrown in to the mix.

Madness, or sanity? We rode it at the bike’s world launch to find out.

WHEN Honda revealed the adventure scooter concept at the Milan Show in 2015 I giggled. Why would anyone want an adventure scooter I thought?  And then, a year later when the X-ADV was presented as a production bike, it started to grow on me. The more I’ve seen it at shows, watched videos of it riding trails, and sat on it at Motorcycle Live, it’s beginning to make sense.

Either I’ve lost the plot, or a robust scooter on tall suspension that can take on adventures, a big enough 745cc twin-cylinder motor putting out 54bhp, to take on town and motorways, with a comfortable riding position and the ability to cope with pot holes and kerbs in town, does actually make a lot of sense. Think of it as a two-wheeled SUV.
We rode the bike today in Sardinia and I’m pleased to say I’m not ready to be put in a strait jacket yet.

Designed in Rome at Honda’s R&D centre, the X-ADV is designed as a bike to go and have fun on, to tool round the city, and then escape the rat race at the weekend.
It’s packed full of really rider friendly and useful features like a Dual Clutch Transmission (DCT) with different modes for sportier riding, an adjustable screen, a massive 21-litres of storage capacity under the seat and wide off-road style handlebars. It sits on chunky semi-knobbly tyres, and features keyless ignition. Honda claim a massive 77mpg, too. After 25 miles on the roads of Sardinia this morning, we can report that it actually makes a lot of sense.

“So put away any doubts you might have about the X-ADV not being fun. We’ve just ridden about 40km’s on it, so it’s early days, but it’s an absolute giggle!

The long travel suspension copes with any bumps that you put in its way and that’s in Sardinia or indeed in the UK. It’s also pretty nimble in the corners and handles well. The X-ADV has Africa Twin brakes so they’re on the softer side, but they’re ace and the DCT technology means that you can just stick it in drive (or one of the sport modes) and off you go.

We’re looking forward to riding the bike more this afternoon, but so far our initial impressions are that it’s practical, it’s fun and it’s fast enough. In lots of ways this is a mini Africa Twin with under seat storage, and there’s nothing wrong with that!"