Police get tough on scooter thieves: Crime down 25% 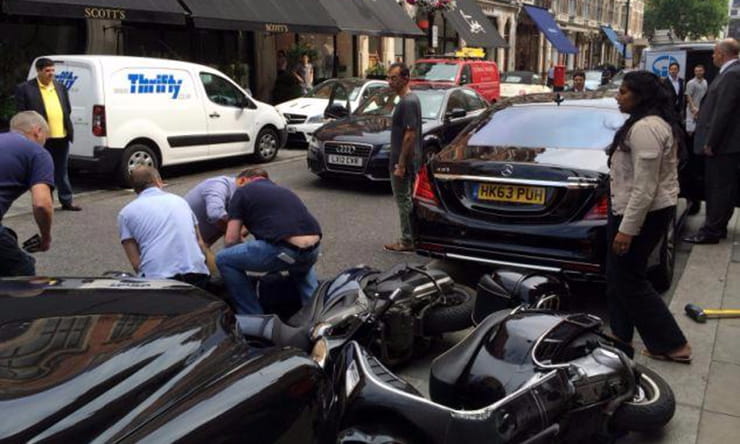 The tactic is part of a new initiative to combat thieves and smash-and-grab raiders, with teams of plain clothes officers – known as snatch squads – ambushing criminals while they are caught in slow moving traffic on their scoters or mopeds at pinch points as they ride into the West End.
As crime gears up for Christmas, 24 pedestrians were targeted in a gang rampage across north London on Monday. Four thieves on scooters and mopeds robbed people of their mobile phones in Islington and Camden before police managed to deploy a ‘stinger’ to trap one of them. That same day, seven suspects on two wheelers raided a luxury watch store in Fleet Street, armed with a samurai sword, metal bars and knives, making off with thousands of pounds worth of watches.
The new ‘snatch and grab’ tactic is being used by officers as an alternative to the controversial chasing of moped robbers at speed in a vehicle – a tactic often considered too risky due to legal implications.
Two moped thieves have been dragged from their bikes so far; one was jailed for three years for robbery offences and the other – who was just 14-years-old – was charged with a series of moped-enabled crimes.
The Met, always looking for new ways to combat the scourge of moped robbers in London, are now deploying stingers to deflate tyres, as well as a forensic spray that marks individuals committing offences, which has been used more than eight times across London in recent weeks.
Detective Superintendent Jess Ruddell of Westminster Police, who implemented the snatch squads said: “This new tactic works and sends out a message that police are willing to do this and tackle these suspects. We are deploying covert and overt tactics to tackle these robberies.”
Sergeant Matt Carey of the Operation Venice team, which targets moped-enabled crime, explained how police also deploy spotters to identify suspects – usually scooter riders with pillion passengers – about to commit crime in the West End. “The spotters radio ahead to the snatch squads lying in wait at designated ambush points where normally they have to walk their bikes through. If the risk is too high and they are travelling at speed we will not do it.”

Subsequent arrests are made by detectives who use forensic techniques and CCTV to identify networks of individuals who are committing many of these offences across London.
Last month a moped robbery gang that committed more than 100 phone snatches in just 18 days was jailed for five years after an investigation by the Westminster Crime Squad.
Claude Parkinson, 18, and two other youths aged 15 and 16 admitted conspiracy to rob at Southwark Crown Court. Samsul Chowdhury, 40, of Bethnal Green got four years, ten months for handling stolen goods.
Police say the tactics are having an effect and crimes have dropped by 25% from a month or so ago. They are appealing to anyone who spots suspicious activity – such as mopeds or scooters coming back to a lock-up in the early hours or youths congregating on bikes with pillions – to contact them.