A year ago the DVSA (Driver and Vehicle Standards Agency) and DfT (Department for Transport) started consultation about changes to motorcycle training. Now the results are in and there’s overwhelming support for all their planned tweaks to the system.

At the moment there’s still no timescale for introducing the changes suggested in the consultation, but the strong backing for the ideas means most of them will be put into the Government’s legislative schedule when time allows. The remaining ideas will be subject to further consultation during 2018 to refine them further. 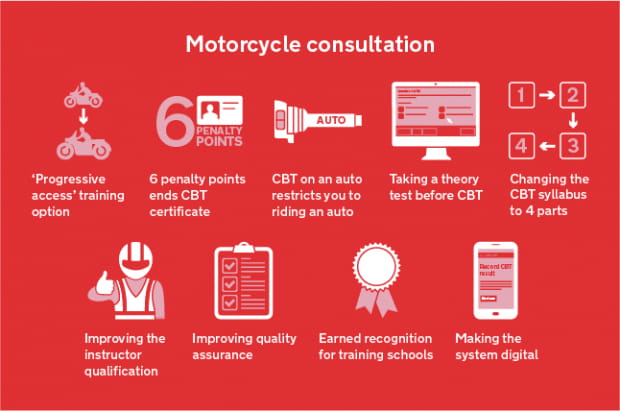 What are the main changes?

The CBT (compulsory basic training) received by all new riders is the main subject for the planned tweaks. While some are relevant only to instructors, others will affect everyone undergoing CBT.

Putting aside the elements that apply only to motorcycle instructors, the key proposed changes are: 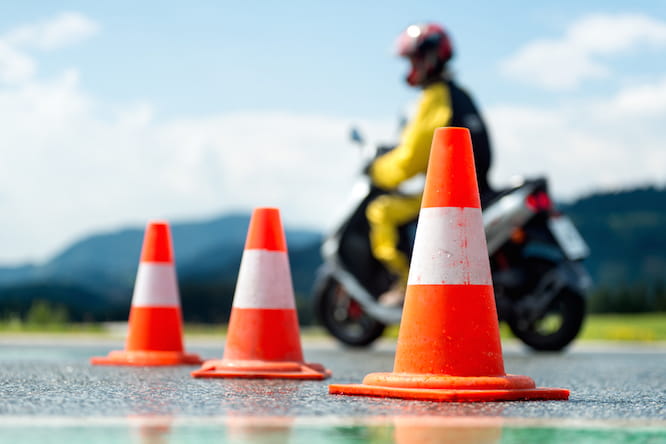 The CBT has been a core part of getting a bike licence since 1990 and hasn’t changed much since then.

The plan is also to update the syllabus to include new steering control exercises and theory, and to add theory instruction on safe filtering. 85.3% agreed with the need for the changes.

Another eminently sensible suggested change is one that would allow instructors to refuse CBT if pupils don’t have suitable clothing. At the moment, they only need to comply with road rules – i.e. wear a helmet – but 95.6% of the consultation’s respondents agreed that there should be a requirement for ‘appropriate’ clothing to undergo CBT.

Following the consultation, the following decision was made:

“There are strong road safety reasons for revising and updating the CBT syllabus.

“The national standard for riding mopeds and motorcycles will be reflected more fully in the CBT syllabus including the trainee being required to ‘know and understand’ rather than ‘be taught’ the different elements in the CBT syllabus. This reflects a more modern approach to client centred learning.

“The new syllabus will also contain additional competencies. This will lead to more focused customer centred assessments, and better preparation for riding in real road conditions. There will be greater emphasis on riders wearing the right protective motorcycle clothing from the outset, as they begin their training, in order to encourage riders to regard such equipment as an inherent part of safe riding on the road.

“We intend to introduce these changes when time allows.” 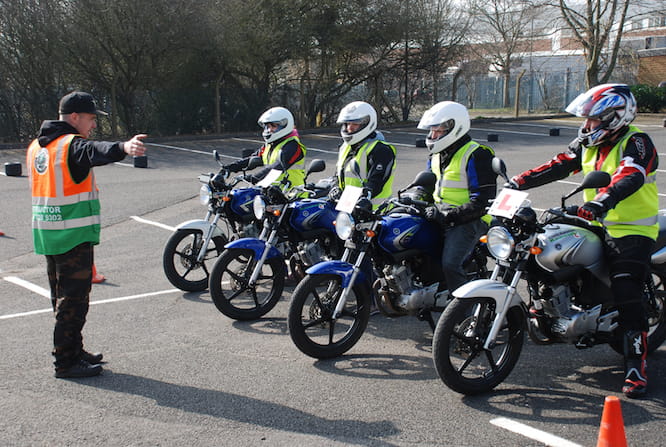 At the moment, getting a full motorcycle licence is a complex procedure, varying depending on age and potentially requiring multiple practical tests.

If you’re over 24, it’s simple enough – you can do a direct-access course and test to be able to ride unrestricted bikes. But for younger riders (the ones that are surely key to the future of motorcycling) there are more hoops to jump through and expenses to bear. To get an unrestricted licence they need to first get an A2 licence (via training and a test) limiting them to a sub-47hp bike. They then need to wait two years before taking another practical test to gain a full ‘category A’ licence.

The planned change would be the introduction of second ‘Progressive Access’ training course as an alternative to this second practical test. European legislation, which imposes the ‘A2’ licence category, already allows for this route.

Instead of the second test, riders could take more training – at least seven hours of it – after which they’d be upgraded to a full licence without further testing.

While there was overwhelming support from those consulted – 91.9% agreed with the idea – the final decision is: “We intend to explore the costs and feasibility of introducing progressive access training and will consult more fully once these factors have been considered.” 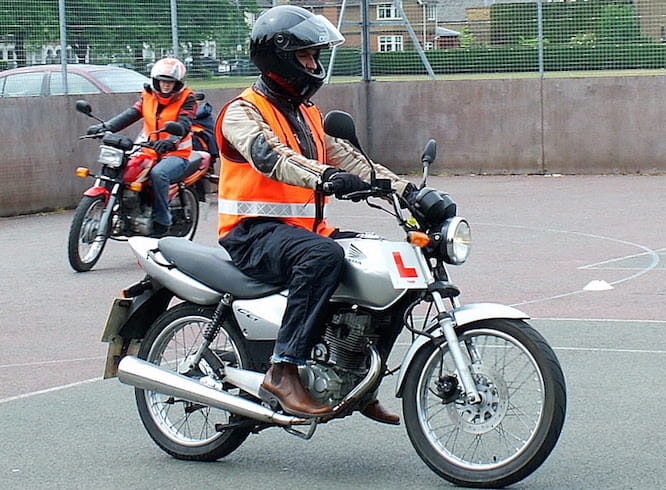 Restricting learners who use automatics for CBT to automatics

This one is a no-brainer, really. Under the current system you can do your CBT on a twist-and-go scooter but then legally ride a manual-transmission bike on the road. Despite the fact you might have zero experience with a clutch, gearchange or foot-operated rear brake.

The most surprising thing is that only 84.4% of those consulted agreed with the planned change, which will limit those who take their CBT on a twist-and-go to using similar machines on the road.

Again, while it makes sense, the DVSA now plans to examine the idea further before implementing it. In particular it needs to work out a system for riders to upgrade their CBT from automatic to manual.

Revoking the CBT certificate if you get six licence points

This is another one that makes a lot of sense. New riders who have passed their test are already subject to a 2-year probation period, during which they’re automatically disqualified and need to re-sit their test if they get six licence points. But at the moment, the same doesn’t apply to CBTs.

The plan is to bring the CBT certificate into line, so it would also be revoked if the holder accrued six points during the two years that it’s valid for. Some 83.7% of consultees agreed with the idea.

The DVSA says: “We will explore this further and consult on the details of how this initiative would operate in practice, particularly as the change is likely to require DVLA system changes to record the removal of CBT.”

Adding a theory test to be taken before CBT

Another area where the old CBT is lagging is in the area of theory. While you need to take a theory test to get a full licence, a CBT lets you get on road unsupervised, potentially with zero knowledge of traffic law.

The consultation again showed a large proportion favour a theory test element to the CBT, with 83.3% agreeing.

The DVSA put forward two options. One was to add a theory test element to the CBT, where the instructor would pose a selection of questions to the learner. The second, more extreme idea was to simply transpose the entire theory and hazard-perception element of the existing driving test, so it needs to be taken before the CBT.

In its final decision, the DVSA has opted to go with the latter, but says it needs to put some more work in before it’s implemented. It said: “Using the existing motorcycle theory and hazard perception would be simpler and easier to implement and would encourage more riders to take training for their full motorcycle practical test.

“We therefore intend to introduce the requirement for all learner riders to pass their motorcycle theory and hazard perception test before completing CBT.

“This would ensure better theoretical knowledge, allow more time for practical training during the CBT course and may encourage more learner riders to go on and take the full test, rather than riding as a learner on a CBT certificate.

“We will need to consider the full impact of introducing this requirement and will consult further on this once the costs have been determined.”