Touratech: What insolvency means for adventure

On Friday 11th August, news broke of Touratech's insolvency; a bolt out of the blue for anyone familiar with the German company's dominance in the adventure bike accessory market.

A business becomes insolvent when it cannot pay its lenders back on time; it means that the money coming in is not enough to cover the money going out. Typically, those who become insolvent will take certain steps toward a resolution. One of the most common solutions for insolvency is bankruptcy. But we're not at that point yet.

The company was founded in 1990 by Herbert Schwarz and Jochen Schanz, building a simple trip computer for motorbikes, before growing to become an employer of 400 staff with a catalogue of thousands of products, as well as making accessories for manufacturers to brand as their own.

A real rags to riches tale if ever there was one. So what's gone wrong?

In 2016 Touratech opened a new ten million Euro factory to sit alongside the existing one in the town of Niedereschach in southern Germany – it was built to deal with increased demand and allow the company to expand. Unfortunately, things didn't go to plan – as Touratech admits in its statements – with a series of issues leading to a considerable loss of production and distribution of its products, and ultimately the circumstances that led to its insolvency.

From the statements issued it would seem that plans are already in place to put the company back on track, with talk of restructuring, or effectively dismantling the business in order to preserve the business’ assets and to keep staff in jobs. What that restructuring process will look like remains to be seen, but Germany's laws on insolvency mean there’s now a three month period during which an external administrator will compile a report to present to a government committee. We'll no doubt know more then.

It's important to note that the insolvency only applies to Touratech AG in Germany, which acts as the parent company to the national importers around the world, who all operate as separate businesses. CEO Nick Plumb of Touratech UK said it was business as usual for their operatio: “We have been informed that we will not be affected by the restructuring in Germany,” he said. “Even though we have had supply issues in the past, we as a company have still continued to grow. This year alone UK sales are up due to the continued demand in the adventure bike market.” 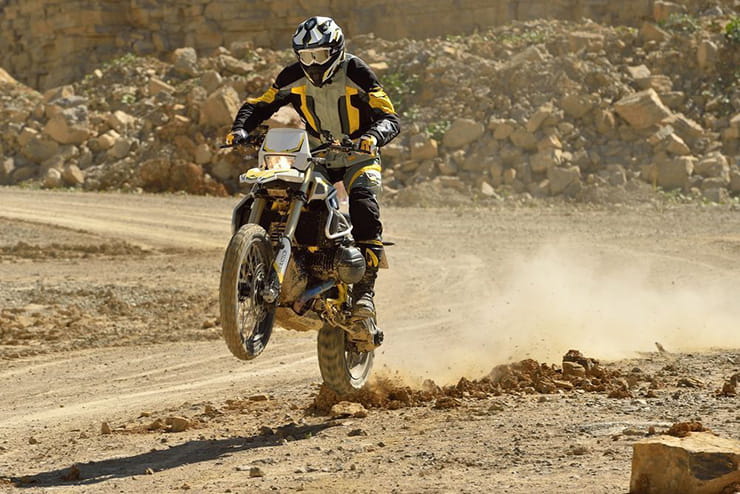 The Touratech Rambler was a one-off, based on the R1200GS

The question remains of what effect all this will have on the reputation of the brand? It would certainly seem to be the case that are enough parties with vested interests to make sure the company doesn't falter. BMW, after all, still has its metal panniers made by Touratech, as do Ducati and KTM. There's a great deal of business riding on this and possibly we could see a buy-out.

As a member of the travel community looking at this from afar it's an interesting and surprising development. Touratech is a company some love to hate, but aside from the extensive catalogue of products, the company has been in many ways a positive force for the adventure travel sector. Its free travel events are excellent, and the passion and ability to produce one-off motorcycles such as the R1200 GS-derived Rambler is unrivalled. Touratech has also been keen to help and sponsor global travellers. For everyone's sake, especially the 400 German workers, we hope the process is a successful one.