At last November’s EICMA show BMW pulled a surprise by revealing its carbon-fibre framed HP4 Race superbike. And far from being a show-only machine it promised that it would reveal a production version in spring 2017 and deliver it to customers before the end of the year.

These new spy pictures show that the schedule hasn’t slipped. The reveal of the final version of the HP4 Race is imminent and here it is before you’re supposed to see it.

What’s instantly clear is that BMW is delivering on all the promises made by last year’s show bike. Its key element was the full carbon-fibre main frame, allied to carbon wheels and a race-spec engine to create an off-the-shelf track bike with near MotoGP levels of performance.

The picture here clearly show the carbon frame has remained, along with full carbon bodywork and wheels. Only the swingarm doesn’t fit the carbon theme, remaining in bare aluminium on this test bike, compared to the black finish used on the show version. 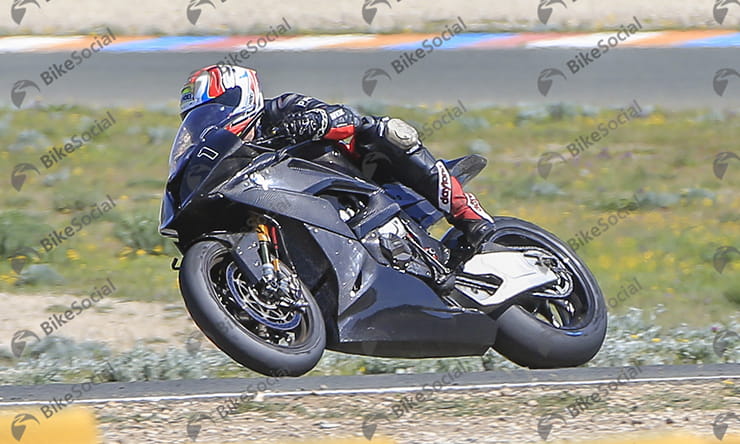 It’s clear that, at the moment at least, BMW is making no concessions to road use. This is a circuit-only machine, with no lights or emissions restrictions to add weight or reduce power. Only a small number will be made and while no price has been revealed, it will be extremely costly.

But before you write it off as just another toy, or worse, investment, to sit unused in the garages of the ultra-rich, know that BMW’s plans for carbon-fibre frames run deep. As a company, BMW has made a commitment to using carbon widely as a weight-saving measure, and to do so it’s created a host of patented mass-production techniques that move the material away from the race track and into the hands of mere mortals. The company’s latest 7-series saloon and its electric i3 and i8 models use carbon for much of their structure.

For motorcycles, BMW has patented further new production techniques. Although it hasn’t confirmed it, the HP4’s chassis is believed to be constructed using a patented system that uses ‘pultrusion’.

The firm’s patent for a carbon S1000RR frame was filed way back in 2013 (patent DE 10 2013 219 476). It reveals that hollow, rectangular-section tubes made of carbon are pultruded through a machine that saturates them with a liquid polymer and forms the carbon fibres into the right shape. When they emerge, they’re still malleable and can be laid onto a chassis buck with cast carbon fibre sections like the rear shock mount, headstock and swingarm pivot in place. A final layer of sheet carbon is then laid over the top and the whole lot is baked to solidify the resin and turn it into an immensely rigid, lightweight component.

Importantly, this system can be almost entirely automated, requiring none of the labour-intensive lay-up procedures involved in conventional carbon fibre construction. It gives a consistent final result and massively reduces production costs.

With so much effort going into the development of new carbon-fibre construction processes, it’s unthinkable that the HP4 Race will remain as BMW’s only carbon-framed bike. Instead, think of it as a preview to designs that will be much more attainable in the near future.

Could the next S1000RR be carbon-fibre? It’s quite possible that BMW has that goal in mind.

In fact, the firm’s patents show that it’s got even more extreme mass-production ideas. As well as the beam frame construction shown on the HP4 Race, there’s a plan to build tubular trellis frames – probably for future R-series boxer engined bikes – using the same material. Another patent (DE 10 2013 223 298) shows that it again relies on pultrusion, but allied to pre-made, cast carbon-fibre or aluminium joint sections. For the trellis frames, round-section carbon is pultruded and cut to the right lengths before being jammed into the joints which are then crushed around the tubes to permanently connect them before the whole lot is heated to cure it into a solid piece. This is an even cheaper, faster way to construct a carbon chassis.

What else is on the HP4 Race?

While the carbon frame is its main talking point, the HP4 Race doesn’t scrimp elsewhere either. The spy shots show that the production bike’s spec remains the same as the show machine from last year.

That means it gets Ohlins FGR forks, a TTX shock and Brembo M50 Monobloc calipers. The engine spec is still unknown, but with no emissions rules to meet and little restriction on noise levels, it’s likely to be close to a WSB-spec motor.

While the chassis technology allows for mass production, the HP4 Race will be hand made in small numbers, and BMW is promising deliveries during the second half of 2017.