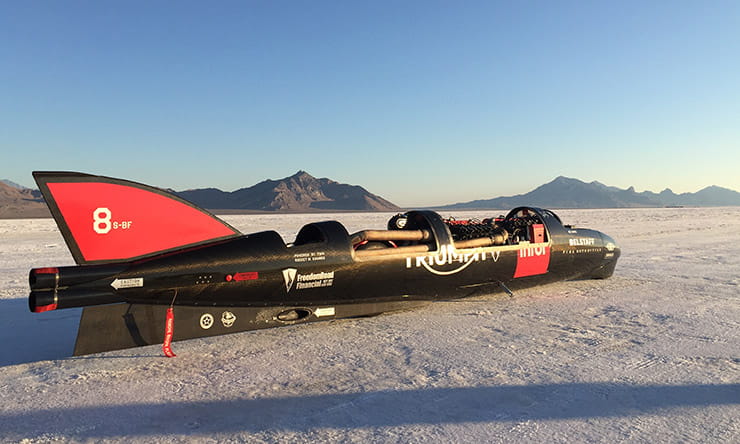 The sun just rose over Bonneville Salt Flats and we're in place ready for Guy Martin’s attempt at the motorcycle land speed record, which will take place later today and tomorrow.

The team are in place with the Triumph Infor Rocket Streamliner as they attempt to break the record and improve on their shakedown run last month, when they became the fastest ever Triumph, after hitting 274.2mph. We’re told the salt conditions should be good later today and could be the best they have been for three years. Right now the course is said to be a little soft further up the course, so we're unlikely to see any action until around midday.

The record currently stands at 376.363mph. It was set by Rocky Robinson and  he Ack Attack streamliner. Interestingly, the Ack Attack team are back at Bonneville this week to defend their title and to try and stop Guy taking the record back to the UK .

The Triumph Infor Rocket features a carbon Kevlar monocoque construction with two turbocharged Triumph Rocket III engines producing a combined 1000bhp at 9,000 rpm. The motorcycle is 25.5 feet (7.78m) long, two feet (600mm) wide and three feet (900mm) tall. Powered by methanol fuel, the bike is competing in the Division C (streamlined motorcycle) category. The course is 11-miles (17.7km) long with five miles to get up to speed, a flying mile, and then five miles to slow down. The time is taken as an average over two timed miles, one up the course, and one on the way back. The team have to get the bike turned around within two hours for the second run. It takes around nine seconds for the streamliner to cover the mile.

Today is likely to include a towed run behind a truck at 60mph down the course to check everything is in shape with the Triumph Streamliner, followed by a shakedown run. It’s then believed Guy will make an attempt at going more than 300mph so that he can get the next tick on his licence before attempting the record tomorrow (Friday).

At least that’s the plan. The conditions are perfect at Bonneville and streamliners get priority on the 11-mile course at least until lunchtime, when the wind tends to get up. The Triumph Infor Rocket Streamliner can’t run for safety if side winds are above 3mph.

Insiders tell me that the Bonneville Salt Flats organisers were incredibly impressed with Guy’s ability to balance the streamliner, something he achieved in an hour. It took the last rider a week to master the two joy ticks he uses to balance the bike. More later.