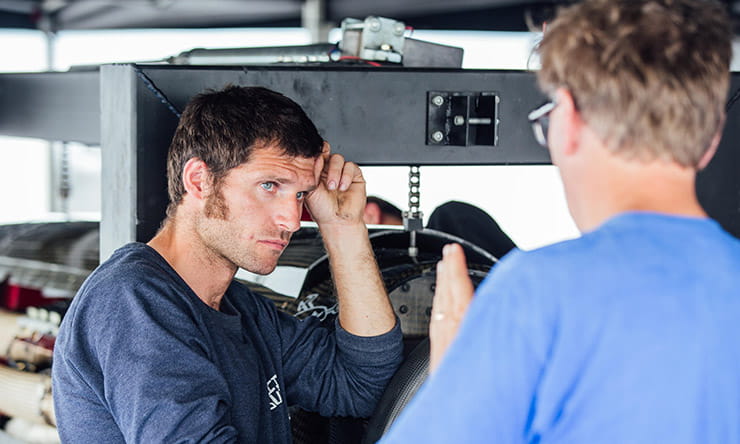 You can see why Guy Martin likes coming to Bonneville Salt Flats.

For a world famous location where the fastest men on earth have risked (and occasionally lost their lives) to become the fastest humans on earth, Guy fits right in. It’s as low key as a club race, or an Irish road race paddock.

Spread around the pits area near the start of the 11-mile straight that makes up the mile zero area of the run are a load of motorhomes and canopies. They’re sat on the edge of a thirty-mile stretch of alien landscape where you can see the curvature of the earth with the naked eye, and where distances become so warped that the Floating Mountain at the end of the salt flats looks maybe two or three miles away but is actually 28 miles from the start.

Beneath the canopies are some of the world’s fastest cars and motorcycles here this week to try and claim their piece of speed record history. Just like Guy.

Multi-million dollar pieces of hardware sit on make-shift tarpaulins to stop the salt getting into everything, while some of the cleverest brains in the world about going fast scratch chins and talk about speed. Talk is all about the condition of the salt, which, following a lot of rain is still not good enough and packed enough to be able to run big numbers like Triumph and Guy are after.

In a trademark Sideburn magazine hoodie and jeans, Guy Martin walks around with his crew. It’s made up of his TT mechanics, mates from back home and his manager.

He’s chilled and in a good mood, hanging out looking at the Honda 660cc-powered streamliner, and getting advice about his potential Bonneville land speed record run from Triumph Infor’s biggest rivals – Team Ack Attack. He says hello, points to the Honda and says to me: “Ah yeah boss, you wanna go and check out that thing, it’s a proper bit of kit that.”

The Honda, some 660cc of 222mph streamliner of it, turns out to be the only vehicle that does a run today. As I walk off to get back to the pits of the Triumph Infor streamliner that Guy is here to pilot to in excess of 376.363mph, he’s chatting about threads of bolts and cross-threading them.

In this company Guy is just another one of the lads, he disappears among the mechanics and teams in their 200mph+ club t-shirts and has already charmed the Bonneville old timers the same way he’s charmed TV audiences and TT fans alike.

He’s here with Triumph Motorcycles and Infor to try and take the world motorcycle land speed record from Team Ack Attack’s twin-engined Suzuki Hayabusa-powered streamliner. It did it in 2010, but with all the publicity surrounding Guy and the streamlines, Ack Attack are er, on the attack, to keep the record they set in 2010 at this week’s Mike Cook Shootout event.

But Triumph have gone all guns blazing with the streamliner, hired one of the world’s fastest men in Guy, and backed a carbon-fibre monocoque streamliner with methanol burning 1000bhp fire power made up of two linked and stroked down Triumph Rocket III engines (1485cc per motor).

Because of his experience on his Speed TV show doing a feet-forward 24-hour cycle race Guy got the riding position right straight away. Because of his skill and immense talent around the Isle of Man TT course he got the hang of balancing the streamliner in less than an hour, the previous rider of the project, took a week before he felt comfortable balancing the bike.

The team tell how Guy did one run on the stabilisers then said: “Get those off”, before going down the track side-to-side getting the feel for the bike. Oh, and then piling in a 274.2mph run on August 8, 2016, to become the fastest-ever Triumph. The bike is controlled by two joy sticks with a throttle on one, controls for the parachute and stabilisers are on the clutch and brake levers, stabilisers need to be lifted at 25mph by Guy. And then there’s an F1-style carbon-fibre brake to back-up the parachute. As team boss Matt Markstaller said: “Either will be fine to stop the streamliner, but it’s best to have both scenarios covered.”

The tyres are old school Goodyear Eagle cross ply slicks that Matt tells me they can continue to spin-up at 400mph on the rim, but do so without destroying the tyre, hence why everyone uses them still.

It covers the measured mile part of the course in some nine seconds after a five-mile run-up, and another five-miles to slow down. A record run is taken from the average speed measured over the mile with two runs in each direction.

But conditions weren’t perfect in August either. The salt was slushy in places and Guy had a big high-speed wobble using all his TT steel and nerve to ride it through and speed-up to calm the wobble.

A picture I saw earlier today shows just how ripped-up the track was from Guy’s 274.2mph run last month. It kept spinning and tearing the track until he was past 250mph, literally pulling the salt up, whereas it should be so hard that it’s leaving rubber marks. And that’s why today not much really happened. Only one vehicle (the Honda 660) went out on the salt and did 222mph, myself and the teams and assembled journalists all waited for not much to happen.

“There’s a whole load of hurry up to do nothing at Bonneville Salt Flats.” Is the favourite saying of the organisers who live and breathe the world’s fastest racetrack. And that’s because if the salt’s not ready to ride on then nobody goes anywhere.

Team boss Matt Markstaller told me: “We could go out and do 250mph, but what’s the point in that? It just puts more wear and tear on it. We’re here for one thing – and that’s the record. Until the salt is right we’re not going anywhere.” The team came last year and didn’t run either because the salt wasn’t right.

And so we wait. Tomorrow may be the day Guy and Triumph fly the flag and take the record back to the UK. Maybe.

But there’s a reason it has taken some 40 years of motorcycle record-breaking to go from 300mph to 374mph. Bonneville takes no prisoners. If the salt ain’t right it ain’t happening.