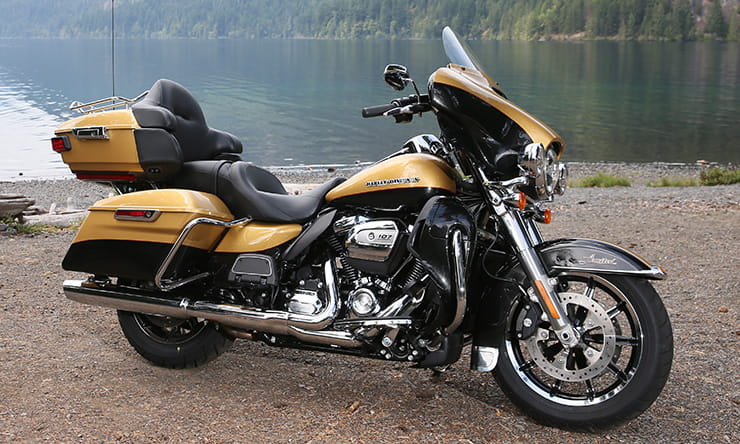 The American firm has just unveiled its all new Milwaukee-Eight engine for its touring range of Harleys – the biggest, most powerful Harley production engine ever produced.

We’re currently in the USA with a fleet of the 2017 touring models riding from Seattle, to Port Angeles and back on some incredible mountain roads.

Announcing the bikes, Harley’s Chief Powertrain Engineer for the H-D Big Twins, Alex Bozmoski said: “The Milwaukee-Eight engine carries the legacy of Harley-Davidson Big Twins into the future. While respecting the essential Big Twin character, we’ve created an all-new motor. Every aspect of performance, durability and styling has been improved as a direct response to the voice of Harley-Davidson customers around the world.”

Bike Social’s Marc Potter just gave his first impressions after riding some of the new bikes this morning and experiencing the new engine. He said: “So far I’ve ridden 50 miles on one of the new Harleys  and although it’s a new engine you get the same feeling at tick over as the outgoing Twin-Cam motor – an engine I’m really familiar with as I rode one last year while doing Route 66 from Chicago to Los Angeles. Then I did some 3000 miles on a Harley Ultra so chose the Ultra Limited as the first of many bikes I will ride today. We're riding through countryside straight out of Twin Peaks and it's a great test for the bikes.

"With 10% more power and a few extra ccs on the liquid-cooled bike I'm riding at the moment, you can feel that it's more refined generally, and from 2000rpm it definitely has more roll-on from 55mph in top gear at those revs. It's not a revelation, but definitely improved. The suspension too means the bike is better damped and doesn't crash as much over bumps, the ride quality is definitely improved.

"As a package the Ultra Limited is one of the best touring bikes you can buy, this just improves that even more.

"The bikes are also claimed to accelerate faster than the outgoing model. Harley claims the Milwaukee-Eight 107 accelerates 11% quicker from 0-60mph compared to the Twin Cam High Output 103 motor, with a three-bike length improvement with the new motor. We’d have to check that accurately, but after our initial ride it’s easy to believe."

We’ll be back with more insight on the new bikes later.

WHICH MOTOR GOES IN WHICH BIKE?