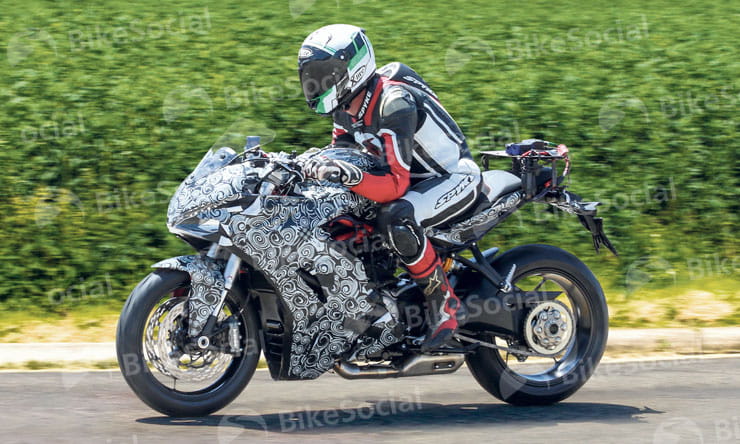 With the first of this year’s big bike shows just around the corner – Cologne’s Intermot show starts on 5th October (although press day is on the 4th) – we’re about to see the first big batch of official unveilings, with another onslaught expected at November’s EICMA event in Milan.

We’ll be reporting live from the shows, starting this time next week.

The introduction of Euro4 emissions regulations will bring the biggest shake-up in years to the ranges of every bike firm. We’ll be seeing old favourites disappear from showrooms and new hopefuls making their debuts.

So what’s due to appear over the next couple of months? Here, in alphabetical order, is a summary of the bikes we’re expecting to see, starting with A-H. The second half will be coming your way tomorrow.

While other firms’ 2017 offerings have been heavily rumoured and subject to spy shots, Aprilia has been remarkably quiet over the last year but that’s not due to a lack of activity.

We hear that the firm’s range is set for a big shake-up, with a smattering of new models and a lot of old ones being discontinued. Rumour has it that the firm’s current V-twin offerings, including the Mana, Shiver, Dorsoduro and Caponord, are all living on borrowed time since none of their engines meet Euro4. Instead of updating the old engines it’s believed that Aprilia is planning to rationalise its strategy by replacing all those old V-twins – which include SOHC and DOHC designs as well as 750cc, 850cc and 1200cc sizes – with a single all-new motor.

The new unit is believed to be a 900cc DOHC twin that will initially power a replacement for the Shiver naked bike, with a Dorsoduro version hot on its heels. The CVT-transmission Mana, already dropped in several countries including the UK, isn’t expected to get a direct replacement.

Higher up in Aprilia’s range, the firm’s V4-powered offerings including the 1000cc RSV4 superbike and 1100cc Tuono V4 are to get tweaks to meet Euro4, and there are indications that Aprilia is also working on a seamless-shift superbike, although perhaps not as soon as 2017. A V4-powered adventure-style machine could also be on the cards, providing an alternative to things like BMW’s S1000XR.

One of the big surprises at last year’s shows was the strong line-up of new models from Sino-Italian firm Benelli. The TRK502 twin-cylinder adventure bike looked sharp enough to make people reconsider their CB500X orders, the Torando 302 was a convincing-looking mini sports bike and the Leoncino scrambler was a real stunner. A year on, and we’re still waiting for those machines to go on sale, but Benelli has even more up its sleeve.

Among the new offerings are a revitalised, Euro4-approved three-cylinder, 900cc machine. Seen in leaked pictures, the bike that’s expected to take the place of the old TnT isn’t quite as radical-looking as its Adrian Morton-styled predecessor, but is likely to be significantly cheaper.

Another leak led to the revelation of a completely new 750cc parallel twin naked bike under development by the firm. Positioned right, as an Italianate alternative to an SV650 or ER6, it could be a compelling machine.

We’re also expecting the range of new models to be expanded downwards, with the launch of a new 125cc sports bike with styling similar to last year’s Tornado 302.

Bavaria’s proudest son, BMW, appears to be able to do little wrong in terms of its bikes at the moment. The R1200GS dominates sales charts, the S1000RR makes Japanese superbikes hard to justify and the R NineT has taken what should have been a niche offering and turned it mainstream.

The S1000R is set to be mildly revised to bring it to Euro4 standards. As well as the inevitable bigger silencer, it gets the latest S1000RR chassis and electronics. Expect some similar Euro4-related updates to the S1000XR.

The S1000RR was heavily revamped for 2015, and as such is due a minor tweak for the 2017 model year. Again, Euro4 changes could mean a revised exhaust and electronics while the bodywork may get small alterations.

The S1000XR is also expected to be tweaked for Euro4, and a BMW survey among owners has hinted that it will get lighter in its next generation. The same survey also hinted that the firm is considering bolting the full-fat S1000RR engine to the bike, upping power significantly to create an S1000XR HP4. It’s not known if that proposal has got the green light, though.

Bigger news from BMW is set to come in the form of two, or even three new R NineT models. Leaked documents have revealed that there will be ‘R NineT Pure’ and ‘R NineT Racer’ versions alongside the original bike and the R NineT Scrambler. It’s thought that the Pure is a stripped-back, entry-level offering, while the Racer will be a part-faired retro sports bike. Both will be identical to the R NineT under the skin. A third version, based on the Lac Rose concept and paying tribute to the original R80 G/S, is also a near certainty.

Other new BMWs are expected to be the seemingly-delayed K1600 Bagger, previewed as the ‘Concept 101’ in May 2015 and spied on test as far back as summer 2014. Design patents for the production version appeared earlier this year, suggesting it was supposed to be on sale by now. Surely it will be launched for the 2017 model year.

The single-cylinder G310R might have only just been launched, but it’s already near-certain that 2017 will see that bike get the ‘GS’ treatment to become an entry-level step on the firm’s adventure bike ladder.

Call it CFMoto or call it WKBikes (the name the firm goes under in the UK) but the Chinese company’s products are getting a design revolution.

It’s already revealed the 2017 650NK naked bike in Australia, and that’s sure to become a new WKBikes 650i. A smaller-engined but visually identical 400cc version has also shown its face on the other side of the world.

We’re also expecting to see the firm reveal a 650cc rival to the Kawasaki Versys in the form of the 650MT. Like the new 650NK, it’s a sharp-looking machine – its styling leaked in design patents – thanks to design influence from Kiska, best known for its work on KTMs in recent years.

While the output of Japanese firms in terms of new models has been relatively slow since the 2008 financial crash, Ducati has been on a seemingly endless crusade to launch a bewildering number of new machines every year. And there’s no sign of it slowing down for 2017 with as many as seven new models in the offering.

Starting at the cheaper end of the firm’s offerings, the massively successful Scrambler range is set to grow. Californian emissions documents recently revealed that there will be two new 803cc Scramblers, dubbed the ‘Scrambler DS’ and ‘Scrambler CR’ added to the line. No prizes for guessing that ‘DS’ stands for Dual Sport and ‘CR’ for Café Racer.

The DS model has been spied on test already and promises to add a bit of retro Paris-Dakar flavour to the Scrambler range.

The air-cooled 803cc engine from the scrambler has also been spotted under test in what appears to be a new Monster, and with the Monster 821 engine failing to meet Euro4, it’s to be replaced by a Monster using the 937cc V-twin from the Hypermotard 939.

The ‘939’ engine is also confirmed to appear in the new Ducati Supersport 939 previewed at this year’s World Ducati Week event. That bike will appear in both base and Ohlins-spring ‘S’ models.

Another bike to get the same motor is a new small-capacity Multistrada.

Of course, we can’t forget Ducati’s core superbike models, and one machine that’s not yet been spotted on test is next year’s replacement for the 1299 Panigale. While we know that the existing 959 Panigale will continue unchanged – it’s already Euro4-legal – the larger superbike will need to be updated. Whether it will get 959-style changes, notably the huge side-mounted exhaust, has yet to be seen, but it’s rumoured that Ducati has a more svelte solution that involves a more significant redesign of the bike. Watch this space.

The arrival of a new Fireblade for 2017 has been the big Honda news topic for months. But far from being a radical, 200bhp monster new spy photos reveal that the bike is actually an update of the existing design.

The chassis and engine are essentially the same as the current offering, which means Honda’s superbike is likely to remain 20bhp or so down on its fastest rivals. Instead of engaging them on pure power, Honda is understood to be looking for a handling advantage. The 2017 Blade will get improved suspension, possibly including electronic, semi-active technology, and a significantly lower weight than the existing model. It’s understood that Honda is ditching its in-house ABS system in favour of the Bosch set-up that’s almost universally used by its rivals. For the first time the Blade will be getting full-on traction/stability control, too.

The Blade will be the big news for Honda, but it’s not the firm’s only new model. Honda has confirmed that the City Adventure concept from last year will reach production as the X-ADV, an NC750-based adventure-tourer-scooter crossbreed that actually looks much more appealing than that recipe sounds.

It’s also set to reveal a new version of the Africa Twin – expected to be a touring-oriented addition to the range. Another two new models are also confirmed to be planned, but the firm hasn’t officially revealed what they are.

We’re told that one – due to be launched in October – is the revamped CB1100. Due to be offered in two versions, the bike was previewed last year in the form of the CB1100 Concept and again earlier this year with the CB1100 Concept Type II.

The other, expected to be revealed in America in November, is unconfirmed but goes under the tagline ‘Express Yourself’. Its American debut hints at a cruiser-style model.

Perhaps coincidentally, it has recently been confirmed that a new Honda going under the name ‘CMX500AH’ will go on sale in India next year. While some have suggested this will be a new CB500X styled like the Indian CX-02 concept model, that’s unlikely. The ‘CMX’ name is traditionally cruiser-related – having previously been used on the parallel-twin CMX450 Rebel in the mid-1980s. Therefore it’s possible that the ‘CMX500AH’ may actually be a CB500-based cruiser or tourer, similar in design to the CTX700 machines based on the NC700 and sold in America.

A new Goldwing has also been widely rumoured, as seems to happen every year, but American emissions documents show that the existing Goldwing and F6B models are due to continue unaltered into next year.

Finally, an obituary; the CBR600RR will disappear from Honda’s line up in 2017, and there’s no replacement currently planned.

After several years of teasing us with concept bikes Husqvarna will finally have the first of its KTM-based street bikes on sale in 2017. In fact, it appears there will several versions of the road-oriented ‘Vitpilen’ – all based on different sizes of KTM Duke.

At the entry level we’ll have the Vitpilen 401, looking much like the original concept bike of the same name and using the same engine and chassis as KTM’s 390 Duke. That concept was followed a year later by the Vitpilen 701, based on the larger 690 Duke, and that model will also reach production in 2017. Seem them both here.

But most exciting of all is a crazy-looking Vitpilen 1301 built around the engine and chassis of the 1290 Super Duke R.

Despite sharing most of their parts with KTM models, all the Vitpilens promise to be quite distinct from the Austrian kin. Changes in settings, both for the engines and suspension, and riding positions means they should feel different, while their styling is quite unique and should provide enough of a line between the two brands to ensure they aren’t simply stealing sales from one another.

For Kawasaki, KTM, Kymco, Moto Guzzi, MV Agusta, Norton, Royal Enfield, Suzuki, Triumph and Yamaha, make sure you check back for the second half of our 2017 preview tomorrow.
Recommended Articles