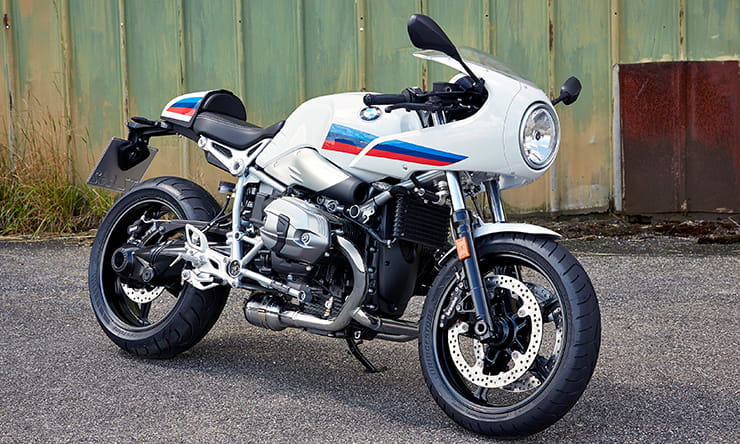 The R nineT Racer takes the concept of the R nineT Sport a stage further with a Seventies-style nose fairing and a single seat unit to create the sportiest-looking R nineT yet.

It’s designed for sporty riding on twisty roads, but with a cool retro vibe when you get to town to show it off. Sideburns, jeans tucked in boots, and Belstaff jackets are optional, we’re told.

A radical concept of the R nineT Racer, called the BMW Concept Ninety, was shown at an Italian concours show back in 2013 to gauge reaction. The finished bike is the Racer you see here.

There’s also a new R nineT Pure which is a stripped-back seventies-inspired roadster. It’s a bit more upright and chilled, with a less sporty riding position than the original R nineT. The first R nineT was launched back in 2013, to critical acclaim as a modern retro that goes faster than its 110bhp suggests, handles better than any BMW this side of an S1000RR, and  a bike that is still holding its money second hand almost four years after launch.

The R nineT Scrambler has just gone on sale in the UK and appears to be mirroring that success, too.

The R nineT Racer is designed as a classically styled half-faired sports motorcycle with clear inspiration from BMWs of old like the R65 and R65S.

Both the Pure and the Racer feature the same basic air-cooled, six-speed 1170cc Boxer Twin engine as the standard R nineT, putting out 110bhp and using a steel tubular space frame from the R nineT Scrambler.

Like the standard R nineT, BMW see customising as a massive part of the R nineT Pure and Racer ownership, so both can be modified by fitting a rear pillion seat and frame on the Racer, or by removing it to make a single seater on the Pure.

Alloy wheels are fitted to both running 180/55 x 17-inch rear tyres and 120/70 x 17 at the front, but spoked wheels are available as an option, as is traction-control.

The Racer features a long-stretched out style evoking memories of seventies street racers, but with a stubby seat unit, rear sets and an aluminium pipe. The frame on the Racer is finished in aluminium silver colour too.

As you may expect, the R nineT Racer is a tad shorter to enhance its sportier handling, with a 1491mm wheelbase. The Pure measures in at 1493mm. The same suspension set-up features BMW’s trademark Paralever rear-end with a single-sided swingarm, and standard telescopic forks and 4-piston brake calipers on twin 320mm front discs.

Modern touches of course include Euro4 friendly engines, automatic stability control as an option, and ABS as standard with LED rear lights. Both exhaust systems also include an electronic valve which means the bikes get round new noise laws, but emit a decent roar when you’re riding them.

Expect the detailing to match the gorgeous touches on the first R nineT with forged aluminium footrests and fork bridges. On the Pure, an option even includes fitting a historical style BMW motorcycle metal plate, and the headlight even features a BMW logo on the bulb cover, as per the R nineT, plus optional leather saddlebags, as well as the usual heated grips and aftermarket pipes you’d expect.

The Pure is available with a black frame and grey non-metallic finish, the Racer is available in white with retro BMW Motorsport colours. No prices are yet available, but to give you an idea, the current R NineT Sport costs £12,990 in the UK. 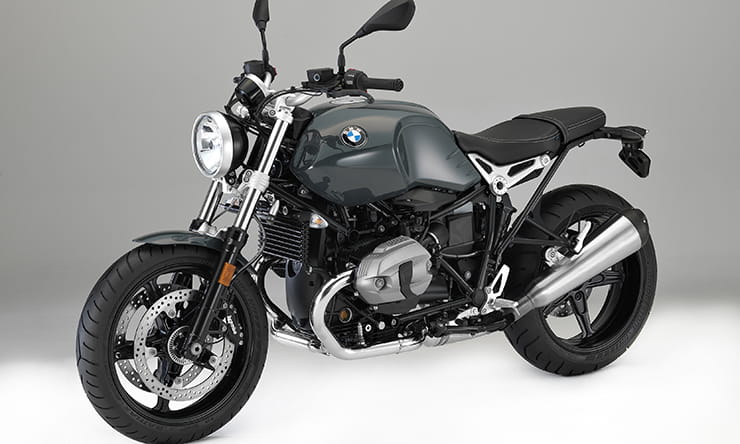