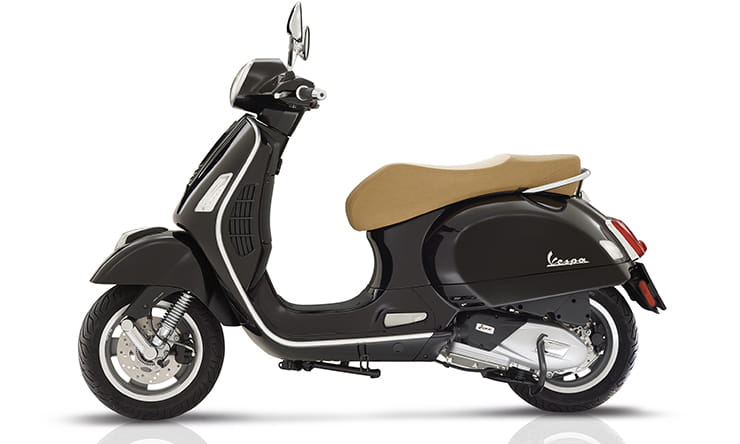 The iconic Vespa scooter will have a clean new Euro4 engine from 2017 with the introduction of Piaggio’s ‘i-get’ motor on the GTS 125.

In line with the class leading Honda PCX125, the Vespa’s ultra-modern liquid cooled engine features a stop start system that switches the engine off after three to seven seconds after pulling up and restarts instantly with a touch of the throttle. The system does away with a traditional starter motor and replaces it with a brushless electrical unit that’s mounted directly to the crankshaft. Piaggio, owners of the Vespa brand, claims that the new system is more reliable and leads to an extremely quiet start up, lighter weight and reduced fuel consumption.

Indeed, making the motor more efficient has been the aim of Piaggio’s design team as it gets the classically styled scooter through the tough new Euro4 regulations being brought in for 2017.

A large portion of the designers’ effort has gone into reducing friction through the introduction of bearings on every rotating part in the timing and in the crank gear geometry, with the cylinder axis shifted to reduce losses due to friction on the piston. The mechanical noise of the new i-get engines is also extremely low due to a reduction in play and an optimisation of the materials and shapes.

The 125cc engine puts out a claimed 9kW (12bhp) at 8250rpm. A 150cc version delivering 11kW (15bhp) is also being produced but is unlikely to come to the UK. Vespa claims 100mpg under the standardized WMTC (Worldwide Harmonized Motorcycle Test Cycle) with servicing every 10,000km (6000 miles).

Chassis-wise, it’s what you’d expect from Vespa. The company prides itself on only using pressed steel chassis and the GTS125 retains that classical Italian scooter style.

Aside from that, it’s packed with as much technology as any premium L-plate legal scooter on the market. No doubt recognizing that Vespa remains the scooter of choice for the trendy urban commuter, there’s a lot of smart tech on the GTS.

It’s compatible with the company’s multimedia platform that connects to a smartphone via Bluetooth and uses an app to transform it into a neat onboard computer with dials for speed, torque, acceleration, lean angle and fuel consumptions, as well as a sat-nav and diagnostic function. It’s also got a function that reminds you where you parked your scooter, great for crowded cities like London or Paris, and a remote control to unlock the seat unit. The GTS125 also has a charging socket in the left-hand leg shield which can charge electrical devices on the go.

No prices are available for the new Vespa GTS125 yet but expect it to be in the region of the £4200 for the current model.