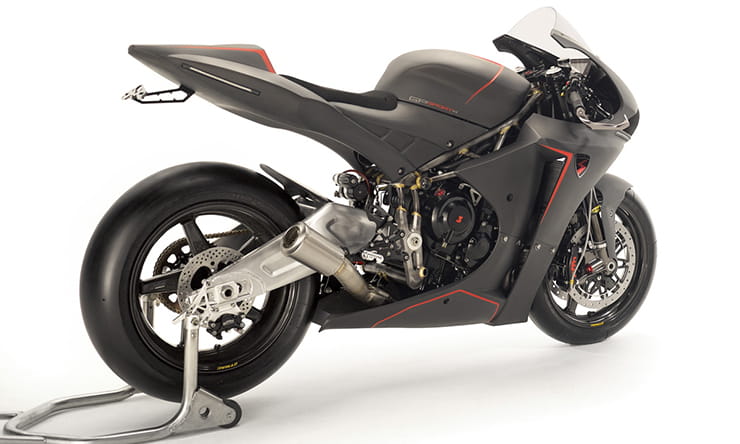 3-cylinder, 750cc, 140kg race bike said to make 180 bhp but BSB boss says it won’t be eligible for points in Supersport during its development year.

Kent-based Spirit Motorcycles whipped the covers off two stunning prototype bikes at the trendy Bike Shed in London last week – one a street bike called the GP Street and the other a Grand Prix-inspired race machine, known as the GP Sport. Both are powered by a tuned three-cylinder 750cc engine.

BSB boss, Stuart Higgs, confirmed the team’s eligibility to BikeSocial and confirmed that the future of the 600/middleweight class has a question mark over its future.

“It (Spirit’s race team) will be in at our discretion as an invitation/special project and won’t be eligible for points,” confirmed Higgs.

Power figures of 180bhp at 13,200 rpm at the rear wheel from a 750cc bike weighing just 140kg (dry) is attention grabbing but aren’t Supersport compliant. OK, it’ll cost you around £69k but for that you get you a fully adjustable, hand crafted, race developed machine with carbon fibre bodywork and a host of F1 and MotoGP-style electronics.

Two variants of each bike will be produced from March 2017, though the ‘R’ versions of both the Street and Sport will be limited to just 50 of each. They’ll be hand built in Spirit’s own workshop, individually numbered and the customer receives a book showing the building of their bike and signed by the engineer who built it. 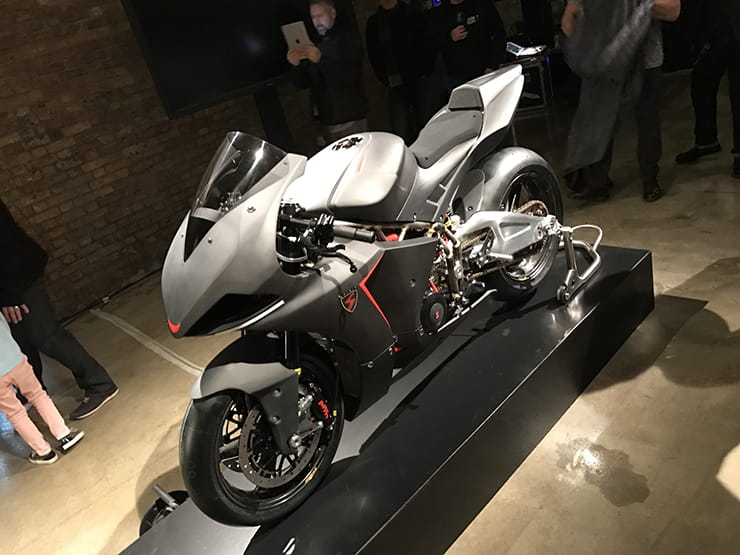 The goal for the race bike is very simple: to offer British racers an opportunity to experience and understand a grand prix bike long before they reach that level and boss, Tony Scott, is clear on his own objective as a result of these carbon-fibre, lightweight bikes. At the launch, he told BikeSocial, “One day we hope that we will see a British rider winning the world championship grand prix title.”

The British firm continued the flag waving by targeting a grand prix style championship here in the UK for home grown talent. Scott confirmed, “Let’s create our own Moto2 class and start looking after our own because the Spanish and Italians seem to pretty much have it nailed and we haven’t. So here it is, here’s the chance.”

Spirit Motorcycles have their eyes firmly on development for the first year and will be running a stock 675cc Daytona engine but afterwards want to see more riders on the grid with manufacturers getting involved bringing their own chassis’, like Tigcraft and Harris, while Spirit will control the engine to ensure a level playing field.

The three-cylinder motor powering the GP Street and GP Sport isn’t named in the press information but has been confirmed to us as a tuned version of the old faithful Daytona 675 engine.

“We’ve taken what we think is a great engine, the Daytona 675, and stroked the crankshaft by 5.4mm and taken it to 750cc. We’ve put our own conrods, our own high compression pistons and superfinished the gearbox so that it is a true racing engine. In the Sport version you get the 750 full Supersport spec – skimmed cylinder heads, high lift cams etc. We’ve tuned the bike like we would for British Championships so the Street is putting out in the region of 160 horse power at the crank whereas the Sport makes 180bhp at the crank.”

However, in further developments, Scott later confirmed that for the racing element to their project, “We will run the stock 675 engine for 2017 so as to comply.  As for weight the bike will not be allowed to score points and will be considered to be out there for the purposes of 'evaluation' thus the weight will be ignored.”

“Everybody else is going for big horsepower but I wanted to go with low weight. For me low weight out manoeuvres big horsepower. We gave it horsepower; 180 horse power and 140 kilos is quite a combination. When you pick that motorcycle up, it’s a bit like hanging around on a 250,” continued Scott.

If K-Tech KTR 2 forks (with upgraded internals), a K-Tech DDS 4-way adjustable rear shock, Dymag Carbon Fibre wheels, titanium exhaust system and PFM race-spec brake callipers and Hel braided dry lines weren’t enough, consider this; a MoTeC ECU with 4G ship-to-shore diagnostic control unit using a Vodafone cloud-based telemetry system. So, if you’re having troubles with the fuelling at a track day in Spain, for example, pick up the phone and the guys back at Spirit HQ offer a unique engineering service because they can see exactly what’s going on with the bike and can make alterations via their computer. And that goes for the road bike too.

Spirit Motorcycles will end up producing four bikes; GP Street, GP Street R, GP Sport and GP Sport R. The differences between the bikes are primarily electronic based but there’s also a difference with the engine components but here’s the base spec: 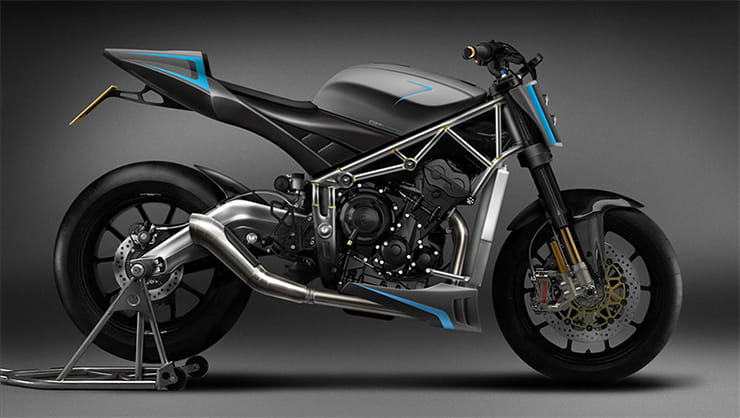 What next for Spirit?

"We’ve already got three more bikes in the pipeline," says Scott. An adaptation of the Speed Triple called the Gemini Twins and a Super Scrambler coming with a single-sided swingarm and a 1200 engine, which could be seen as early as summer 2017 although Scott says it's likely to be the back end of the year. "They’re works of art, they’re pretty bikes but they’re utterly functional and I want to make sure that whatever we build is built as best as a motorcycle can be – I don’t want to build fashion statements,” he says.