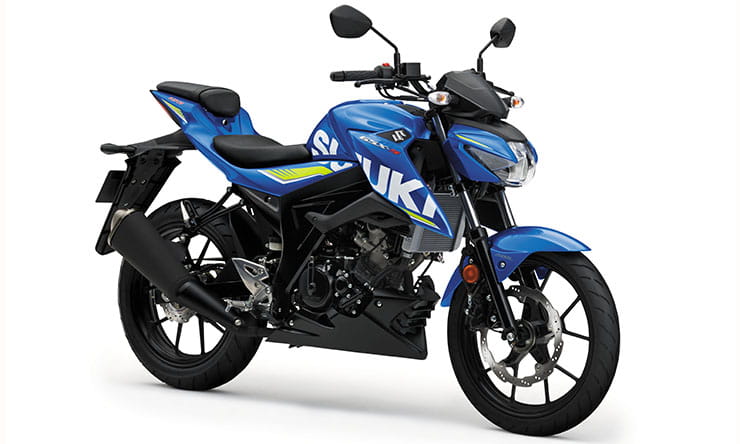 Their neat new GSX-R125 hasn’t even reached the showrooms yet, but that hasn’t stopped Suzuki from announcing an unfaired version at EICMA today – the GSX-S125.

Going head-to-head with the KTM 125 Duke, Yamaha MT-125 and the recently announced Aprilia Tuono 125, the new Suzuki takes its styling cues from the bigger GSX-S1000 and is claiming the best power-to-weight ratio in the hotly contested naked 125 licence class.

Weighing in at just 133kg ready to ride, and with a 785mm seat height, the Suzuki promises to be an agile city bike that should provide plenty of fun for A1 licence holders.

Suzuki are making some big claims about the GSX-S125 and there’s certainly plenty of big spec for a little bike. They claim that the frame is around 3kg lighter than that found on competitor 125s while the engine is expected to put out close to the full 14.75bhp permitted under A1 licence restrictions.

With it’s low and narrow seat, the GSX-S125 should be very manageable for shorter and inexperienced riders, while the raised bars should give it a more relaxed and upright riding position than with the GSX-R upon which it is based. Suzuki also claims a 40-degree steering angle, which should contribute to a tight turning circle and good manoeuvrability in rush hour traffic.

Otherwise the spec between the faired and naked models are essentially the same. Lightweight 10-spoke alloy wheels are shod with Dunlop D102 rubber developed especially for the new Suzukis, while the latest Bosch ABS system is deployed for added reassurance under braking. Other highlights include Suzuki’s cool new highly functional LCD instrument panel, stacked LED headlights and the one touch ‘easy start’ feature that debuted on the company’s bigger bikes last year.

No word on prices or availability dates yet, but three colour options are available: black, red or a MotoGP inspired metallic blue.