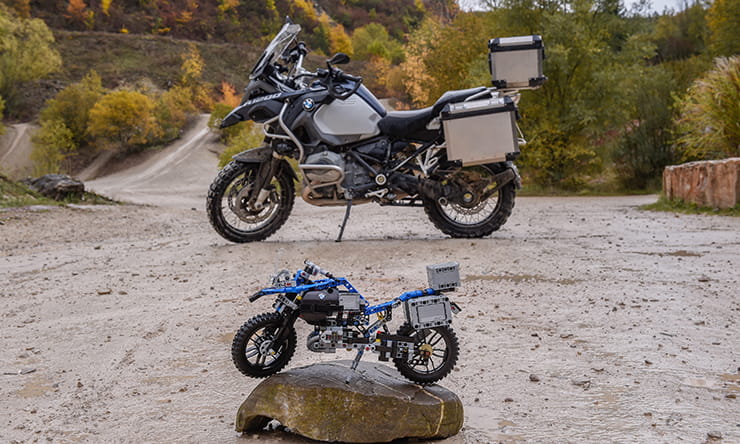 Everyone loves LEGO, right? And the fact that you’re reading this means that you probably love motorbikes too. So, what could be better than a motorbike made of LEGO? Nope, we can’t think of anything either…

Well, from next year we can build our own LEGO’d representation of BMW’s iconic R1200GS Adventure as the good folks from Bavaria have joined forces with the massive Danish toy giant to produce a 603 piece model of the best selling adventure tourer.

Launched under Lego’s grown-up Technic brand, the LEGO Technic BMW R 1200 GS Adventure is designed to be as faithful as possible. It’s LEGO’s first tie in with a motorcycle brand, although the company has worked with a number of high end car brands, such as Porsche and Ferrari, to develop models.

Although far less detailed than a regular plastic model, LEGO’s interpretation retains the characteristic lines of the motorcycle and there are moving handlebars and even an adjustable windshield, although you have to do ‘broom-broom’ noises yourself.

Real world bike enthusiasts will recognise the authentic BMW Telelever front wheel suspension and the shaft drive as well as the moving flat twin engine, which are set in motion as soon as the motorcycle is moved. Even the black spoke wheels with studded tyres resemble those of the model's real counterpart. Thanks to the many details, BMW says that the set is not only realistic but also fun and challenging to build.

“The proportions of the R 1200 GS Adventure have been recreated outstandingly well in the LEGO Technic model. We are excited to see how LEGO Design has reproduced so many visual and technical details of the R 1200 GS Adventure. The close and creative cooperation between the two design teams was particularly impressive – it went beyond a conventional licensing agreement”, says Alexander Buckan, Head of BMW Motorrad Vehicle Design.

The model is 18 cm high, 33 cm long and 10 cm wide, and an interactive LEGO app is available for the set that features 3D assembly instructions.

As a dedicated AFOL* I can’t wait to get my hands on the GS set when it comes out, although with a launch date of January 1st, it is sadly a few weeks too late for my birthday.

No news on prices, but we’d expect somewhere it to be somewhere in the region of £50 when it hits the shelves in the new year.