Ariel announce the Ace R – be quick, only 10 will be built 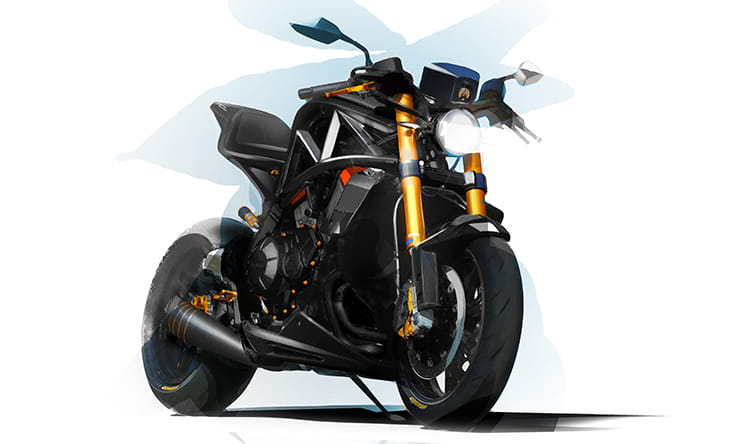 Ariel, the small Somerset-based manufacturer is set to reveal their latest bike, the Ace R, at Motorcycle Live at the NEC later this month.

A limited edition run of ten bikes is set to result in a scramble for cheque books and deposits being readied in time for the Birmingham-based motorcycle show with a promise from Ariel that the new bike will offer “more performance and power over the standard Ace”.

The Ace R will feature a tuned Honda V4 VFR1200 engine which is the same power plant used in the £32,000 Ace, along with the donor bikes’ electronics and shaft drive system.

Judging by the artist’s impression released today by Ariel, the supernaked style machine looks set to use the same chassis layout, subframe, Ohlins suspension and sporty riding position. The bikes appearance is dominated by the aluminium machined frame with each one taking 70 hours to build from a block of aluminium.

Following on from other Ariel Limited Editions, such as the Atom V8 and Atom Mugen cars, the Ace R will have a unique colour scheme and specification giving more performance and power over the standard bike. The Ace, which we tested in 2015, makes a reported 167bhp so an increase in power will put it up against the utterly mad KTM Super Duke R in terms of performance.

Tom Siebert, heading up the Ariel Ace Team said, “We’ll release the full specification at the Show but I can say that the R has a lot of carbon, a lot of machined aluminium and a lot of power!”

We’ll be reporting live from the NEC from 19-26 November so will have the full details for you soon.