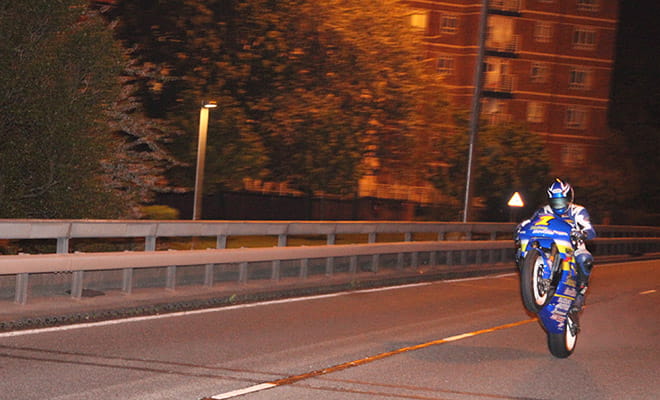 Ring Roads. Let’s face it, they’re not the most inspiring of places. Log jammed, grey and irritating are some of the words that spring to mind. Well that’s unless you happened to be stood on the flyover of Junction 7 of the Coventry Ring Road last night, when one of the world’s most iconic motorcycles took to the tarmac for the press launch of Motofest 2016.

In attendance were bikes provided by Nathan Columbi of Team Classic Suzuki. Firstly, he brought the frankly beautiful Movistar livered RGV500 that world champion Kenny Roberts Jnr rode in the final 500cc World Championship season. Alongside the tiny RGV was equally stunning looking, but sadly static Suzuki XR69 that is to be campaigned by Lee Johnston this year on the classic road racing tour.

Both bikes looked the part, set against the high-rise skyline of Coventry, but the RGV was there to be ridden! As soon as its tyre had hit the tarmac, the starting rollers were fired up and the city centre reverberated to the sound of a two-stroke MotoGP machine, most probably for the first time ever!

While the bike was warming up I grabbed a few words with courier/rider Nathan, who just a few days earlier had been wheelying the RGV down the straight at the MotoGP event Le Mans. “The hardest thing is the temperature,” he said. “Not just the tyres, because they’re never going to get warm, but the engine won’t run below 55° and cold seizure is a real risk.” So apart from detonating the engine of a £150,000 500cc bike, what else did he think? “Well the event looks great. We have a really busy run of activities in the next three weeks, something on every single weekend but this is really something different. The track should be awesome, I’ve only done a few ‘ton up’ runs, but with the speed limit and traffic signs whipping past you, and the fact we are 60 feet above a carpark, it’s just… wow!” 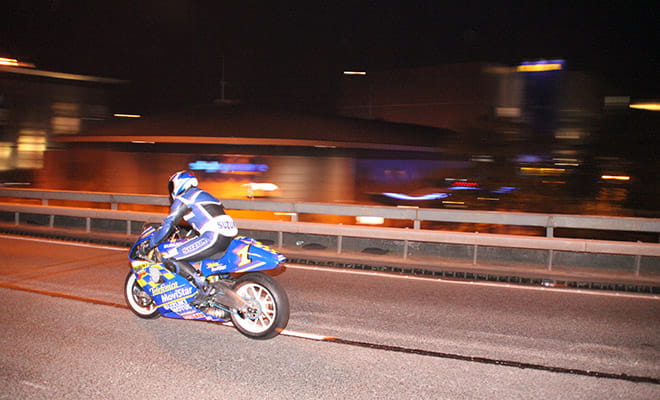 After the initial slow runs the get some shots from a camera car they cleared flyover and Nathan gunned this irreplaceable bike up the slip road and over the flyover. As Nathan rode past the assembled press, a healthy dose of throttle brought the front wheel a couple of feet over the tarmac and with that, he was gone in a haze of exhaust smoke.

Afterwards I grabbed event mastermind James Noble for a chat and got his thoughts on the bike side of Motofest. He said: “Coventry is steeped in automotive history, and not just the four wheeled kind.  We want the bikes to become as much as a part of the event as the cars. We already have the static display, and now with on track runs we just want this side of it to get bigger and bigger.”

It takes people with massive amounts of drive and passion to get festivals like Motofest past the red tape brigade, so I asked James where he sees the two wheeled activities in a year or so from now.  “Ultimately ACU approval and a competitive element,” he concluded.

I’m sure there are many hurdles to cross before this happens but the fact they have the event as it is just now is a massive result, I for one am in no doubt that they will get the job done.

Bennetts and Bike Social are proud to be supporting Motofest 2016. To find out more about this free to attend event, visit www.coventrymotofest.com